A Brief History of the Editions of TMS: Part I

Smith’s evolution across the six editions of TMS showcases his desire to refine his moral philosophy in an effort to extend what David Hume called “the science of man.” 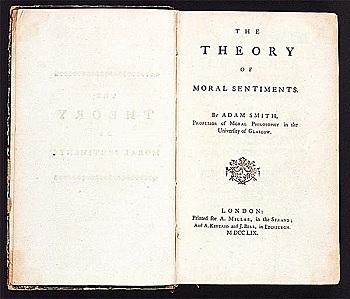 November 25, 2020
In the The Study of Man (1959) Michael Polanyi encourages us to study and commune with great minds:

Every pebble is unique, but profoundly unique objects are rare. Wherever they are found (whether in nature or among the members of human society) they are interesting in themselves. They offer opportunity for intimate indwelling and for a systematic study of their individuality. Since great men are more profoundly unique than any object in nature, they sustain a far more elaborate study of uniqueness than any natural object can. (quoted in Klein 2012, 314)

Polanyi serves as motivation for what might seem a dry exercise: a brief history of the editions of the Theory of Moral Sentiments (TMS).2 Considering the history of the editions of TMS provides insight into 31 years of the intellectual evolution of Adam Smith—a great man and unique mind if ever there was one.
Smith’s evolution across the six editions of TMS showcases his desire to refine his moral philosophy in an effort to extend what David Hume called “the science of man.” In this vein we see Smith tinkering with his formulations of sympathy and conscience, partially in response to feedback from contemporaries. His evolution also showcases his desire to use philosophy to improve society. Dugald Stewart (1982) wrote in his “Account of the Life and Writings of Adam Smith,” that Smith’s “ruling passion” was a desire to contribute “to the happiness and improvement of human society” (271). In the sixth edition particularly, Smith exhorts us to the pursuit of wisdom and virtue as the path towards the good life. His exhortation comes in light of his assessment of the tremendous promises and potential pitfalls of commercial society, an assessment based in “long reflection … on his wide knowledge of public affairs and his equally wide reading of history” (Raphael and Macfie 1982, 1). In addition to getting a window into the mind of a great man, considering the editions of TMS provides an opportunity to reflect on the relation between economics and ethics, commercial society and the good life.
In what follows I first provide a short sketch of the changes in the first five editions. I then dwell on edition 6 of TMS, as it was the last thing Smith published during his lifetime and features the most changes. I conclude with some comments on the arc of Smith’s development.
**
The first edition of TMS was published in 1759 during Smith’s tenure as Chair of Moral Philosophy at the University of Glasgow.3 The book grew out of Smith’s lectures, as evidenced by testimonies of his contemporaries John Millar and James Woodrow. Part of the rhetoric of TMS indicates its origin from lecture notes. As if addressing a lecture hall, Smith writes at one point that “it has been observed on a former occasion” (TMS IV.2.7). Similar phrases recur throughout.
An immediate success, the first edition of TMS is written in elegant prose and presents what was—and is still— seen by many as an original account of moral judgment via sympathy. Edmund Burke wrote to Smith of the “ingenuity,” “solidity,” and “Truth” of his theory and praised his “elegant Painting of the manners and passions'' (Corr. 38, pp. 46-7). Hume relates the book’s reception in a letter to Smith: “I proceed to tell you the melancholy News, that your Book has been very unfortunate: For the Public seem disposed to applaud it extremely. It was lookd for by the foolish People with some Impatience; and the Mob of Literati are beginning already to be very loud in its Praises” (Corr. 31, 35).
A second edition of TMS appeared in 1761. Part of the changes in the second edition are in response to critical feedback from Hume and Scotsman Gilbert Elliot of Minto. Hume presses Smith on his claim that sympathy is necessarily agreeable. Hume writes to Smith,

I wish you had more particularly and fully prov’d, that all kinds of Sympathy are necessarily Agreeable. This is the Hinge of your System, and yet you only mention the Matter cursorily in p. 20 … It is always thought a difficult Problem to account for the Pleasure received from the Tears and Grief and Sympathy of Tragedy; which woud not be the Case, if all Sympathy was agreeable. An Hospital woud be a more entertaining Place than a Ball. (Corr. 36, 43)