Reading Smith Through the American Founding 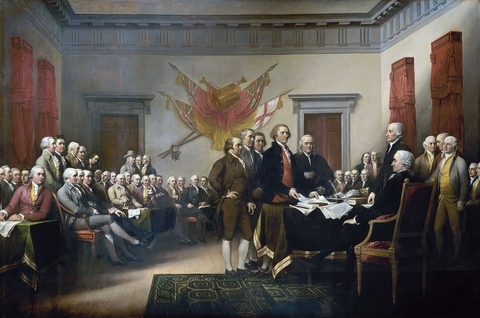 This lesson plan pairs quotations and original text from Adam Smith's An Inquiry into the Nature and Causes of the Wealth of Nations with important founding-era American documents to build students' understanding of Smith, the American Founders, and the time at which they were active.

This lesson is appropriate for high school and college students studying history and/or civics.

After completing this lesson, students should be able to recognize Smithian ideas in the American Founding documents, as well as have a firm understanding of each of these key points of Smith’s ideas.

This lesson can be taught with or without the included slide decks. Smith excerpts are provided in full via handouts and are available online through the links provided in the lesson plan. Founding documents are available through Teaching American History.

The intellectual movements of the Scottish Enlightenment, American Revolution, and American Founding took place within a lifetime of one another, and it is clear that the American Founders were at least familiar with Adam Smith’s Theory of Moral Sentiments as of 1776, and some had certainly read the An Inquiry into the Nature and Causes of the Wealth of Nations by the time of the Constitutional Convention of 1787. This is not to say that Smith’s ideas directly influenced the Founders, but rather that the Founders’ ideas were formed, considered, and disseminated through a series of overlapping academic, political, and social circles. Simply put, they were contemporaries, and so it is a worthy exercise to explore connections between them by using Smith as a lens through which to consider the American Founding.

The following documents, each either a seminal American document or by one of the most important American Founders, is preceded by a single line from Smith. This single sentence is to be read out of context and alone, and considered for only for what it says, and what it seems, therefore, to mean. The student should read this single sentence, consider what it seems to mean, and then write a draft answer to the Smith Focus Question. After this, the student should move on to the associated Founding Era documents. Upon reading these documents, the student should then turn to the excerpted selection from Smith, from which the initial sentence was drawn, which will provide context and a more complete meaning for the sentence.

The student should then revisit the draft of the Smith Focus Question, revising it as needed, based on a greater understanding of the original quote and the meaning established around it. Finally, the student should consider both sets of documents together, and work to formulate answers to the Follow-Up Questions.

Note: although these five sections are best worked through together, and in the order presented, it is possible to present them to students individually.

Smith Quote: “According to the system of natural liberty, the sovereign has only three duties to attend to; three duties of great importance, indeed, but plain and intelligible to common understandings: first, the duty of protecting the society from the violence and invasion of other independent societies; secondly, the duty of protecting, as far as possible, every member of the society from the injustice or oppression of every other member of it, or the duty of establishing an exact administration of justice; and, thirdly, the duty of erecting and maintaining certain public works and certain public institutions, which it can never be for the interest of any individual, or small number of individuals, to erect and maintain…” (WN Book IV Ch 9)

Smith Quote: “THE greatest improvement in the productive powers of labour, and the greater part of the skill, dexterity, and judgment with which it is any where directed, or applied, seem to have been the effects of the division of labour.” (WN Book 1 Ch 1)

Focus Question:
Founding Docs:
Smith Excerpt(s):
An Inquiry into the Nature and Causes of the Wealth of Nations Vol. 1, I.i.1 through and including I.i.8
(Liberty Fund print edition pages 13–21)

Smith quote: “For a very small expence (sic) the public can facilitate, can encourage, and can even impose upon almost the whole body of the people, the necessity of acquiring those most essential parts of education.” (WN Book V Ch 1)

4.  The Administration of Justice

Smith quote: “[An essential]…duty of the sovereign [is] that of protecting, as far as possible, every member of the society from the injustice or oppression of every other member of it, or the duty of establishing an exact administration of justice…”  (WN Book V Ch 1)

Smith Excerpt(s):
An Inquiry into the Nature and Causes of the Wealth of Nations Vol. 2, V.i.b.1 through and including V.i.b.8
(Liberty Fund print edition pages 708–713)

5.  A System of Ordered Liberty

Smith quote:
“The statesman, who should attempt to direct private people in what manner they ought to employ their capitals, would not only load himself with a most unnecessary attention, but assume an authority which could safely be trusted, not only to no single person, but to no council or senate whatever, and which would no-where be so dangerous as in the hands of a man who had folly and presumption enough to fancy himself fit to exercise it.” (WN Book IV Ch 2)