The early reception of the WN in Buenos Aires: 1797 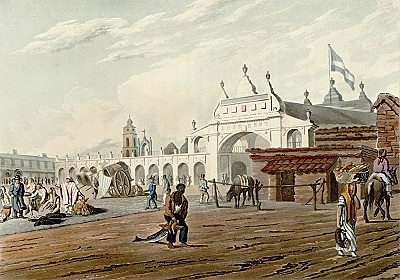 Emeric Essex Vidal (1791-1861) / Public domain
July 22, 2020
Adam Smith’s ideas, especially those present in The Wealth of Nations (WN), were received in some intellectual circles outside Europe earlier than is sometimes supposed. The case of the reception of WN in Buenos Aires is a good testimony to this. Many references to Smith’s works and ideas can be found before 1810, the year in which the May Revolution took place and Argentina started its way towards independence from Spain. The first quotation of Smith’s work in Buenos Aires appeared as early as 1797. This quotation was not a minor or anecdotal reference to his ideas. On the contrary, it shows to how great an extent, as soon as Smith’s ideas were known, his economic theses were adopted among the people of Buenos Aires, not only by intellectuals, but also by merchants and political leaders.

It is well documented that between 1794 and 1810, some of the more recognized founding fathers of Argentina, such as Manuel Belgrano, Mariano Moreno and, in a special way, Juan Hipólito Vieytes, were inspired by Smith’s economic ideas. After reading WN, they realized that Smith’s ideas were not limited to Great Britain, and that they could be used as a guide to develop commercial and economic activity in Buenos Aires. However, the honour of quoting Smith in Buenos Aires for the first time does not belong to any of them, but to a merchant, Francisco Antonio de Escalada.

But, how was it possible that the ideas of this Scotsman arrived in Buenos Aires, overcoming the geographical distance, the difference in language, and above all, the religious-political difficulties posed by the censorship that was done by Spanish institutions? How is it that the first reference to him was not made by these illustrious Argentinian leaders and intellectuals, but by a merchant, and in the midst of a difficult discussion about free trade? The answer to these questions makes an exciting story that, in my opinion, reflects the universality of Smithean thought.

One of the main difficulties that Smith’s works had to face in order to reach the Spanish-speaking world was that of translation. The problem was not so much a difficulty in finding someone who knew English but rather the powerful religious-political censorship that prohibited translation of Smith’s ideas. To overcome this problem, in 1792 the Spaniard Carlos Martínez Irujo translated WN into Spanish from a French edition by Condorcet. Strictly speaking, Condorcet’s work was a condensed translation of Smith’s WN. He had deleted some paragraphs and his version, as a result, had a shorter text. To overcome censorship, Martínez de Irujo, in turn, suppressed even more paragraphs, especially those in which religious toleration is discussed. Interestingly, the Spaniard also added some paragraphs which he translated directly from the original English version. The final result of Martínez de Irujo’s translation is, then, a mixture of Condorcet’s translation and Smith’s original. It was published under the title “Compendio de la obra inglesa intitulada Riqueza de las Naciones” which in English is “Compendium of the English work entitled Wealth of Nations.” [1] At the end of 1794 a new translation of WN was published. This translation was done directly from the English text, but it also had some parts that were modified to avoid censorship. The translator of that edition was José Alonso Ortiz. However, it is the 1792 “Compendium” that Francisco de Escalada read and that inspired him in an important debate that took place in Buenos Aires about free trade.

This debate happened in March 1797. In those days some of the members of Buenos Aires’s Cabildo [2] proposed removing legal restrictions on trade between Buenos Aires and other colonies and cities. Their aim was to trade as freely as possible, allowing everyone in Buenos Aires to buy and sell goods not only with other Spanish colonies, but also with colonies from other countries. However, not everyone in Buenos Aires agreed with this idea. Thus, a vigorous debate started and involved the most important people of the Viceroyalty of the Rio de la Plata. The debate can be summarized in the following question: Would it increase the happiness of the inhabitants of Buenos Aires to open trade to new markets as much as possible?

The discussion was not easy. Many merchants opposed free trade. These merchants, some of whom were very influential, appealed to the idea of “common interest” as an argument to maintain restrictions on trade. This made the political authorities distrust the advantages of changing the regulations and allow free trade.

The discussion that took place in Buenos Aires was not an original discussion. In fact, Smith had dealt with the same problem not only in WN, but had also participated in a very similar debate around 1780. At that time, the Irish Parliament approved free trade for Ireland. Some British political leaders were not sure how to deal with this. So Henry Dundas and Lord Carlisle wrote to Smith and asked him about the advantages and disadvantages of favouring free trade. One of the main questions was whether the opening was advantageous for Ireland, England, and Scotland, or only for the first one. Smith answered them in different letters, reiterating the central theses proposed in WN. [3] Free trade was good for everyone. This proposal, however, would surely be opposed by some merchants and manufacturers, especially from England. Smith said that merchants sometimes had a very narrow vision and did not see beyond a close and concrete interest, conspiring even against themselves. He also said that this opposition was not something that should be underestimated, since some merchants were very influential people, and they could block the initiative and maintain trade restrictions. [4]

At the meeting of the Cabildo of Buenos Aires in March 1797, although the discussion took place geographically far away from Ireland and England and de Escalada probably did not know anything about the discussion in the Irish Parliament, the question was essentially the same: Is free trade good for the wealth of nations? And what is more, here also there were some merchants who wanted to keep the restrictions to commerce. The parallels between the cases are clear.

De Escalada, who advocated for opening commerce to other colonies and countries, presented his arguments and specifically requested that his speech be recorded in the minutes of the Cabildo. That day, de Escalada emphatically defended the benefits of having commerce with every nation in the world. The text shows that his argument was, in many respects, inspired by Smith’s ideas. The first thing he pointed out was that, contrary to what some people might have believed, freedom of trade would be beneficial for everyone, not only for the inhabitants of Buenos Aires. If the restrictions were suppressed, all those who were subject to the Spanish crown would achieve greater happiness, even those living in distant Europe.

However, the high point came when de Escalada addressed the question of why, if allowing free trade was so beneficial to the people, there was resistance, especially from some merchants, who devoted their lives to trade. To answer this, de Escalada appealed here directly to the words of Adam Smith himself, quoting the Scotsman for the first time in Buenos Aires. He pointed out that “the greatest of the English politicians Smith” said:


Any new law or regulation that is proposed in trade businesses, if it is proposed from the same merchants must be received with great caution, and before adopting it, it must be carefully examined with the greatest care and attention, with much distrust because these projects stem from a class of men whose interest is not always in line with that of the public: usually interested in deceiving and oppressing him, and finally of a class that has executed one and the other in the most contrived and tyrannical way.

Because de Escalada was quoting Irujo’s Spanish translation, which was made from Condorcet’s French translation, the quotation is slightly different from the original English text. Nevertheless, the quotation can be easily traced as the last part of the final paragraph of the first book of WN. [5]

With this quotation from Adam Smith’s work de Escalada was trying to show that one of the greatest defenders of free trade and the inspirer of his arguments recognized that it is sometimes the merchants themselves who opposed it. In other words, although they devote their lives to commerce, they are not always favourable to free trade, and this is due to a short term personal interest. This deep knowledge that Smith shows, both of the nature of commerce and of human nature, with its limitations and weaknesses, seems to have captivated de Escalada. So, in his speech, he openly acknowledged the Scottish inspiration in this matter.

In this way, it is in this debate where the first quotation of Adam Smith in Buenos Aires can be found. It was the starting point of a long history of agreements and disagreements between Argentine political economic thought and Adam Smith’s ideas.

I said at the beginning that, in the case of Buenos Aires, the reception of WN was earlier than it is usually supposed. Smith had died just seven years before, and we know, thanks to his Correspondence, that he was particularly interested in the reception of his ideas and his work. [6] If he had lived just a few more years, he might have learned that far from Scotland, in an almost forgotten territory such as eighteenth-century Buenos Aires, a merchant appealed publicly to his ideas to defend free trade. One can imagine that, surely, he would have felt very proud and very pleased.

[1] Carlos Martínez de Irujo, Compendio de la obra inglesa intitulada Riqueza de las Naciones, Madrid, Imprenta Real, 1792.
[2]  In the Spanish colonies, the Cabildo was the administrative council of cities and villages.
[3]  See Correspondence of Adam Smith, 201, 202 y 203.
[4] For example, in his letter to Lord Carlisle, Smith wrote: “A very slender interest of our own Manufacturers is the foundation of all these unjust and oppressive restraints” (Correspondence..., 202). Also see WN, I,x,p, 10.
[5]  For a complete comparison you can see: a) the Spanish version is on page 97 of the  Compendio..., The French version from which it is translated: Bibliotheque de l´homme public, III, Paris, 1790, p. 161. The original text of WN is the final paragraph of the first book: I, x, p, 10.
[6] There are many letters about this in his Correspondence. For example, letters 207, 208 and 209, in which he deals with the Danish translation.