Rights and Responsibilities in Frankenstein and The Theory of Moral Sentiments 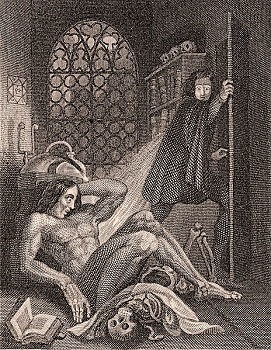 with Caroline Breashears
Session I: Family and Creation
Frankenstein, Preface and Volume I (pages 49-110)
The Theory of Moral Sentiments
·         VI.ii.i: “Of the Order in which Individuals are recommended by Nature to our care and attention” (219-27)
·         IV.i: “Of the beauty which the appearance of Utility bestows upon the productions of art, and the extensive influence of this species of Beauty” (179-87)
Domestic Affection: In his Preface to Frankenstein, Percy Shelley emphasizes its “exhibition of the amiableness of domestic affection, and the excellence of universal virtue” (49). How and where do we see domestic affection in this novel?  How and where do we see its absence?  Is Victor’s lack of tenderness for his creation “monstrous” in the sense Smith describes? (VI.ii.1.7)
Rights: What are Victor’s rights as creator?  What are the creation’s rights?
Responsibilities: What are Victor’s responsibilities as a scientist creating life? How does Victor fulfill or fail to fulfill those responsibilities? Smith observes that we sometimes become so focused on a “beautiful and orderly system” that we seem to value “the means more than the end.” In fact, Smith argues, “There have been men of the greatest public spirit, who have shown themselves in other respects not very sensible to the feelings of humanity” (Smith, IV.i.11, page 185). How does Frankenstein resemble or differ from this man of system in his process of creating life and his response to it?
Session II: Sympathy and Judgment
Frankenstein, Volume II (111-160)
The Theory of Moral Sentiments
·         I.i.1-2: “Of Sympathy” and “Of the Pleasure of mutual Sympathy” (9-16).
·         III.1:  “Of the Principle of Self-approbation and of Self-disapprobation” (109-113)
·         III.ii.1-13: “Of the love of Praise, and of that of Praise-worthiness; and of the dread of Blame, and of that of Blame-worthiness” (113-34)
Sympathy: Both Smith and Frankenstein’s creature emphasizes the significance of sympathy.  Why is it so central?  Do they assign it the same role?  Where and how do we as readers use the process of sympathy to judge the propriety of the characters’ behavior in Frankenstein?
Impartial Spectator: How does the creature learn self-judgment?  How does his process of judgment resemble or differ from Smith’s impartial spectator process?  Where and why do we see significant lapses in self-judgment in characters?
Judgment: Does Victor judge the Creature fairly?  Does he make the right decision in agreeing to make a mate for the Creature?
Session III: Beneficence and Justice
Frankenstein, Volume III (161-221)
P.B. Shelley, “On ‘Frankenstein,’” in Frankenstein (281-82)
The Theory of Moral Sentiments, II.ii: “Of Justice and Beneficence” (78-91)
The Creature’s Mate: Is Victor right to destroy the mate he is making the creature? Is the Creature’s resentment just? Are there other, beneficent options they might consider for addressing the Creature’s isolation and misery?  How might it be useful for these characters to draw upon Smith’s impartial spectator process in this conflict?
Justice for the Murdered: What does justice demand in relation to the creature’s murders of multiple individuals, including Elizabeth?  How does the reader’s response compare to Smith’s depiction of how and why injustice is punished?
Justice for the Creature: What, if anything, does justice demand for Victor’s abandonment of the creature? Can/should society intervene in this conflict?
Beneficence: What, if anything, is this novel suggesting about the importance of beneficence and its relation to justice?  Is Percy Shelley right (in his posthumous review) that the moral of this novel is “treat a person ill, and he will become wicked”?  Is it true that if you divide a person from society, “you impose upon him the irresistible obligations—malevolence and selfishness”?  Is sympathy the key?