by Peter Foster for AdamSmithWorks 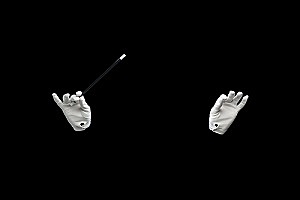 The Invisible Hand is perhaps the most important—and most controversial—metaphor in economics. For fans of markets, it is synonymous with free individuals having their commercial interactions informed and guided by the feedback mechanism of the price system. Market critics, by contrast, refute the notion that even good results—let alone the best—could come from myriad disjointed individual decisions guided by some mystical-sounding metaphor. They claim that the Hand is tainted by greed and exploitation, leads to inequity and dangerous corporate power, and threatens not merely resource depletion but planetary disaster.
The Great Insight
The concept—properly understood—is central to Smith’s insights, although he uses the phrase only once in The Theory of Moral Sentiments and once in An Inquiry into the Nature and Causes of the Wealth of Nations. In Moral Sentiments, he suggests that “The rich … are led by an Invisible Hand to make nearly the same distribution of the necessaries of life, which would have been made, had the earth been divided into equal portions among all its inhabitants.” In other words, they “share the wealth” despite themselves.


In Wealth of Nations, Smith uses the term to refer to a merchant naturally preferring and supporting his domestic economy. “By preferring the support of domestic to that of foreign industry, he intends only his own security; and by directing that industry in such a manner as its produce may be of the greatest value, he intends only his own gain, and he is in this, as in many other cases, led by an Invisible Hand to promote an end which was no part of his intention.”


This could be taken to suggest that Smith was promoting local investment over the foreign variety. In fact, he was referring to people’s natural—and wise—tendency to stick to markets that they know. The context of this passage was Smith’s opposition to the artificial promotion of the export trade, but he is also clearly pointing to the more extensive benefits of self-interested commercial behaviour.


Smith’s most important indirect reference lies in his example of how the market provides for even the most humble labourer. To accommodate the labourer’s simple needs, Smith observed, required an amount of cooperation that “exceeds all computation.” Smith took as his prime example the labourer’s plain woollen coat, which, “as coarse and rough as it may appear, is the produce of the joint labour of a great multitude of workmen.” Smith enumerated all the parts of the wool industry, all the merchants and carriers, all the elaborate machinery—from ships and mills to looms and furnaces—that would have been involved. Producing the rest of the workman’s attire, and his tools, home, furniture and utensils, similarly required vast interconnected industries. “Without the assistance and co-operation of many thousands,” wrote Smith, “the very meanest person in a civilized country could not be provided, even according to what we very falsely imagine, the easy and simple manner in which he is commonly accommodated.”

Here is the Invisible Hand in all its productive but taken-for-granted glory.


Reaching into the 20th Century
Friedrich Hayek elaborated on the ministrations of the Hand in his seminal article “The Use of Knowledge in Society.” He pointed out that the issue in commerce isn’t one of planning versus non-planning, but of who should do the planning, and at what level. He noted that everybody plans according to their own perspectives and desires, but the sort of knowledge used in such planning is not analogous to scientific knowledge. It is “knowledge of the particular circumstances of time and place.” It cannot be known by others, and it cannot be captured by statistics or fed into government economic plans.


The key issue is how to use all this dispersed knowledge. That is what the Hand of the market does, by guiding and rewarding efficiency, specialization, and profitable innovation. This complex process, wrote Hayek, is a “marvel,” but an unacknowledged and underappreciated one.

The most popular exposition of the Invisible Hand is Leonard Read’s essay “I, Pencil,” in which a humble writing instrument outlines its own astonishing and again underappreciated genealogy (If Smith’s coat could have talked, it would have delivered a similar message to Read’s pencil). Read picked a pencil, rather than something more complex, such as an automobile or airplane, to emphasize how the most apparently simple objects are the result of a stunning amount of specialized, market-based cooperation. Read’s pencil notes, “Not a single person on the face of this earth knows how to make me.”


In 1976, Milton Friedman wrote of I, Pencil, “I know of no other piece of literature that so succinctly, persuasively, and effectively illustrates the meaning of both Adam Smith’s invisible hand—the possibility of cooperation without coercion—and Friedrich Hayek’s emphasis on the importance of dispersed knowledge and the role of the price system in communicating information that ‘will make the individuals do the desirable things without anyone having to tell them what to do.’”
Friedman wrote his praise of Leonard Read’s pencil in 1976, the 200th anniversary of Wealth of Nations, but appreciation of the Invisible Hand remained rare, particularly at the policy level. As commercial society—and its sometimes problematic partner, democracy—expanded over the two centuries following Smith’s death, the Invisible Hand was increasingly seen as the central insight of the Smithian system. This perhaps explains why it remained the target of everything from snide condescension to towering condemnation.

A Moral Hand?
In The German Ideology, Smith’s nemesis, Karl Marx, made reference to “an English economist” who claimed that “the relation of supply and demand…hovers over the earth like the fate of the ancients, and with Invisible Hand allots fortune and misfortune to men, sets up empires and wrecks empires, causes nations to rise and disappear.” Whether this referred to Smith (who was of course Scottish), it certainly gave a looming and threatening significance to the concept of the Hand that Smith had never intended.


Condemnation of the Invisible Hand tends to come heavily tinged with moralism. It is tainted, claim critics, because it guides people whose fundamental motivation is greed. (Significantly, Smith used the word “greed” only once in Wealth of Nations, and he used it to describe governments and their greed for power. But the greed taboo remains evergreen. According to the now much-referenced Wikipedia, the Invisible Hand implies that “greed will drive actors to beneficial behavior.”)


Some of the concept’s most virulent critics have been economists. In his book, Head to Head, Harvard’s Lester Thurow wrote that “Too often, Adam Smith’s ‘Invisible Hand’ became the hand of a pickpocket.” In Twenty-First Century Capitalism, the Marxist academic Robert Heilbroner shed crocodile tears for the alleged passing of the concept. “Nowadays,” he wrote, “one does not much hear about the Invisible Hand, Adam Smith’s marvellous metaphor for the market system. The system is all too visible in the form of corporate manoeuvres or garish advertising.” Joseph Stiglitz—who won an economics Nobel in 2001 for his work on “asymmetric information”—was another reflexive big-government interventionist who treated the concept with disdain. He never tired of repeating that the Hand “is invisible, at least in part, because it is not there.” One wonders if Stiglitz ever wondered where coats and pencils—let alone iPhones—came from.


One of the most comprehensive assaults on the battered extremity came in a 2001 book, Economic Sentiments, by Emma Rothschild. Rothschild spun around the concept like a malevolent spider, seeking to immobilize it with rhetorical stings and semantic silk. In her desire to refute the ideologically offensive metaphor, Rothschild attempted to glove it with unalloyed evil. She claimed that it should be “understood in the setting of the ‘bloody and Invisible Hand’ of Macbeth’s providence, or the ‘Invisible Hand’ which rebuffs and then hovers over the unfortunate hero of Voltaire’s Oedipe.” Her Invisible Hand was also a false god, allegedly the object of “reverence” by “fundamentalist” believers (none of whom she identified). She claimed that the concept was “extremely condescending about the intentions of individual agents.” She said the Invisible Hand was also contrary to Smith’s championship of enlightenment because its “subjects” were “blind.”


But surely the concept is there to be grasped by anybody who is prepared to observe, study, and think. Nor are those operating within the realm of the Hand, as Rothschild claimed, “puny and futile.” They are the creators—albeit unwittingly—of an extensive, undesigned, cybernetic system that provides them with signals and opportunities to fulfill their own objectives most cheaply and efficiently.


“Market power” is an object of obsessive concern for the left, so the Hand is inevitably claimed to serve it rather than undermine it. Rothschild’s Orwellian logic ran as follows: capitalist freedom leads to unequal wealth, which inevitably leads the economically powerful to attempt to buy political influence in order to rig the market. She was merely recycling Marx, but she unwittingly peddled one of the party slogans from Nineteen Eighty-Four: “Freedom is Slavery.”


Meanwhile, academic hatred for the Invisible Hand can rarely have been more glaringly expressed than by the Oxford business school professor Colin Mayer in his 2013 book, Firm Commitment: Why the Corporation Is Failing Us and How to Restore Trust in It. This was Mayer’s assessment of how the Invisible Hand works: “Just as rats rushing to leave a sinking ship re-establish its buoyancy, so in the individual pursuit of our own self interest we collectively confer benefits on those who lie on the other side of the market.”


All That is Wanted or Required
One prevalent but bogus critique is that the validity of the Hand depends on the (naïve) belief that economic actors are rational and markets are perfect. Smith was, in fact, in Moral Sentiments, a keen analyst of human irrationality. He also pointed out that the business of the market was achieved by a rough “higgling and bargaining” and continued despite the “folly and impertinence” of government policy. The division of labour, he stressed, had come about as the “consequence of a certain propensity in human nature…to truck, barter, and exchange one thing for another.” It was a “propensity,” not an exercise in unbridled rationality. Smith also specifically refuted the notion that market-based prosperity required perfection. “If a nation could not prosper without the enjoyment of perfect liberty and perfect justice, there is not in the world a nation which could ever have prospered.”

Smith promoted free trade, but he never anticipated that it would be achieved. He wrote, “To expect, indeed, that the freedom of trade should ever be entirely restored in Great Britain, is as absurd as to expect that Oceana or Utopia should ever be established in it. Not only the prejudices of the publick, but what is much more unconquerable, the private interests of many individuals, irresistibly oppose it.”


Similarly, rejection of the Invisible Hand is rooted in the “private interests” of politicians. The concept is not mystical, but it is counterintuitive, and requires intellectual effort to grasp. The point at which they “see” the Invisible Hand often represents the “Eureka!” moment for economists. Many never get it.
One reason why many intellectuals and politicians consciously or unconsciously resist “getting it” is that it is lethal to their interventionist pretensions. It suggests that deliberate market tinkering “for the public good” is, as Smith suggested, likely to be counterproductive—analogous, perhaps, to an all-too-visible bull in a china shop.


History has established that the market process, guided by the Invisible Hand, is not only infinitely superior to central planning in creating wealth, it is an essential partner to freedom. “The lesson I have to teach is this,” concluded Leonard Read’s pencil. “Have faith that free men and women will respond to the Invisible Hand.”