Compare the pin factory from Adam Smith's Wealth of Nations to a modern potato chip factory described in a podcast. 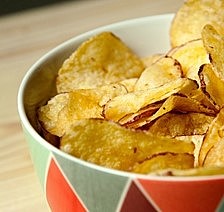 Explore with high school or introductory university students the way that the division of labor and changing market size have changed production over time.

As a class or in smaller groups, ask your students to read the first chapter of Adam Smith’s famous book, An Inquiry into the Nature and Causes of the Wealth of Nations using the AdamSmithWorks reading guide questions. They should work together to understand the language and terminology.

If you have broken the class into groups to read the text, come back together as a class to discuss the answers to the different questions in the text.

Watch An Animal That Trades: Division of Labor.

Short answer questions, found at the bottom of the page or in the questions handout, can be sent home with students as homework or discussed in class.

Ask students to listen to the EconTalk Podcast on Frito Lay before the next class.

Ask students to explore Adam Smith’s Pin Factory at AdamSmithWorks.com/pin_factory. If computers, phones, or tablets are not available to explore in-class, ask students also to review this page before coming to class.

How does the EconTalk podcast on potato chips relate to Adam Smith?

Discuss: What would Adam Smith say about the Frito Lay factory?
Think about how different the Frito Lay factory is compared to the 18th-century pin factory you explored online. What are some similarities and differences between the two factories? What did you find most surprising about the way potato chips are made? What do you think Adam Smith would have found most surprising about how potato chips are made?
Adam Smith would be absolutely astonished by the Frito Lay factory. It would have been hard for Smith to imagine that the division of labor could affect production as much as it has in the Frito Lay factory and how it has allowed them to achieve incredible economies of scale. But he had the tools to explain why all of these changes have happened. The main reasons are: extensions of the division of labor and the increase in market size.


Compared to Adam Smith’s time, there are so many machines involved in a modern factory. Today, so many machines are involved in the production of potato chips. Smith, who lived before the Industrial Revolution, would have had a hard time imagining that technology could accomplish so much. The precision of the machinery in the chips factory is breathtaking—for example, think of the puffs of air that remove unacceptable chips from a 60 mph potato chip conveyor belt through quality control. These machines take over many tasks that would otherwise have to be done much more slowly and probably with less precision than if they were completed by people.


Time saved by automation and the division of labor allows for incredible production speed. In the Frito Lay factory, automation and the conveyor belt system almost eliminate switching costs. There are still separate steps to the process and a variety of machines involved along the way. The speed of production is incredible. In Wealth of Nations, Smith talks about a pin factory of ten people increasing production from 20 to 4800 pins per person employed per day. The chip factory increases the production of each employee by orders of magnitude more than the pin factory did while also increasing product quality.


Skills and dexterity in a modern factory are not applied directly to production but rather to running automated production systems. In a modern, automated factory, human skill is not applied to the production of the potato chips, but to the systems that ensure the machines are running as they need to. How the machines do their work is truly awesome, and the quality (consistency) of the end product is higher than we could imagine possible. This represents another dramatic change from the sort of factory that Adam Smith observed when he watched pin-making in the 18th century.


Economies of Scale refers to the idea that costs per unit decrease as you produce more of a good. One outcome of the increased productivity that comes from the division of labour is economies of scale. In Smith’s pin factory, the costs per pin fell as less labour had to be put into their production. In the Frito Lay factory, this is true to an even greater extent. The Killingly, CT Frito Lay production facility, which services only Maine, Vermont, Massachusetts, Connecticut, Rhode Island, New York, and parts of Pennsylvania and New Jersey, makes 150 million pounds of potato chips per year.
Compare this to a scenario in which you and a friend make potato chips in your home kitchen. What are some differences between this scenario and the Frito Lay factory and how are those differences related to the division of labor?
As homework, ask students to explain how the division of labor making potato chips with a friend differs from the division of labor in a potato chip factory. How does it affect specialization, time, technology, product quality, and cost per chip?


The Extent of the Market
In Chapter 3 of Book 1 of Wealth of Nations, Adam Smith says,
“As it is the power of exchanging that gives occasion to the division of labour, so the extent of this division must always be limited by the extent of that power, or, in other words, by the extent of the market. When the market is very small, no person can have any encouragement to dedicate himself entirely to one employment, for want of the power to exchange all that surplus part of the produce of his own labour, which is over and above his own consumption, for such parts of the produce of other men’s labour as he has occasion for.”
Read through this passage with your students. Ask them to state it in plain language: the larger the market, the more division of labor it can support.
Why would the size of the market matter to the ability of the division of labor to increase production?
Think of the Frito Lay factory. It’s not difficult to imagine that the machines for a single factory might cost $10 million. The mechanism that weighs the chips on a single conveyor belt line costs $300,000. It only makes sense to purchase these machines if you can sell enough potato chips to cover the cost.
For example, if you can sell a bag of potato chips for $0.50, how many bags would you have to sell to cover the fixed costs of the machines? (20 million bags)
There is a Frito Lay factory in Beloit, WI. Beloit has a population of 35,000 people. If Frito Lay were only selling chips in the city, every person in Beloit would have to buy 571 $0.50 bags of potato chips just to cover the cost of the machinery in the factory—and they’d still have to cover other fixed costs such as of the buildings and land, plus variable costs such as ingredients and labor.
In other words, the factory doesn’t make sense unless it can sell to a much bigger market.

Students should discuss at least specialization, time of production, technology, quality, and cost of production when making their case. Here are some examples of potential differences.
Home production of potato chips will be very expensive for the reasons discussed when thinking about the division of labor when making potato chips with a friend. Quality will also be less reliable than in very large-scale production. Home cooks may not be able to produce chips cheaply enough to charge a price anyone would pay.
A small business would presumably increase production to the point at which specialization and dexterity would improve and enough employees may be hired to reduce switching costs. A dedicated business could likely invest in specialized equipment such as high-powered food processors and industrial deep-fryers. They would also be able to buy ingredients in bulk.
The Frito-Lay factory is not well-suited for the reasons discussed in class, which the students should reference. Beloit is not large enough to support the extent of the division of labor that the factory represents.