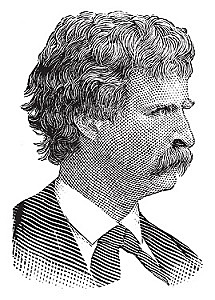 February 6, 2019
Mark Twain (born Samuel Clemens) cannot be classified as a friend or foe of Adam Smith. In fact, it is unclear whether he ever lost a wink of sleep over or spared a moment of distraction for the Glasgow professor. Research for this essay did not uncover any scholarship connecting the two, and Twain rarely invoked famous intellectuals except when satirizing scribblers and orators who trotted them out to garnish half-baked ideas.

For instance, it seems likely that Twain referenced Adam Smith in a comic piece, “Political Economy,” published in the newspaper Galaxy in 1870. Writing about economics with satirical erudition, Twain says,

Washington loved this exquisite science; such names as Baker, Beckwith, Judson, Smith, are imperishably linked with it; and even imperial Homer…


Besides Smith, none of the names in Twain’s list are well-known economists. Twain knew a Harvey Beckwith, who was superintendent of a Nevada mine and at whom Twain had, two years before, poked gentle fun in a comic letter recommending him for a government position investigating illegal whiskey distilleries.[1] Judson refers to Colonel Ezra Zane Carroll Judson, a dime novelist who wrote under the pen name Ned Buntline and who had lectured in support of a private American-led coup of Cuba in Hannibal, Missouri when Twain was a boy.[2] In other words, the list is a joke. Rifling his mind for grand economists, Twain can only think of traveling tub-thumpers, friendly acquaintances, and Smith, who may or may not be the author of Wealth of Nations.


A Connecticut Smithian in King Arthur’s Court
At times, however, Twain appears to have owed something of a debt—direct or indirect—to Smith. Twain devoted most of the chapter “Sixth Century Political Economy” in A Connecticut Yankee in King Arthur’s Court to the subject of trade and labor.[3] The hero, Hank Morgan, an American who has traveled back in time to medieval England, tries unsuccessfully to convince a blacksmith and other villagers that free trade creates more wealth than protective tariffs. The medieval villagers point out that they enjoy higher wages thanks to their tariffs, while Morgan, standing in for Twain, repeatedly objects that their high wages were more than offset by the rising price of commodities. The idea that the falling cost of goods was worth more than nominally higher wages seemed unbelievable to medieval minds. Morgan resigns himself, “What those people valued was high wages; it didn’t seem to be a matter of any consequence to them whether the high wages would buy anything or not. They stood for ‘protection,’ and swore by it, which was reasonable enough, because interested parties had gulled them into the notion that it was protection which had created their high wages” (373-374).

Morgan had another trick up his sleeve to win over the reluctant villagers, however: the promise of free labor. He begins to describe “an unwritten law of wages,” that wages will increase over the centuries. He then turns to the coming era of free wages, when the magistrate would no longer fix wages and instead laborers would negotiate their wages, sometimes with the help of unions, and the employer would be able to hire and fire employees on negotiated terms and at-will (374-376). This line of argument is not persuasive to the villagers. “Will there be no law or sense in that day?” they respond (377). Not long after, when Morgan points out that his antagonist, the blacksmith, confessed to violating the magistrates’ wage laws, acting as though even he aspires to be able to set his own wages and terms of employment, the villagers attack him as a mob.

Hank Morgan’s modern economics are recognizable as those of Adam Smith. Morgan’s argument that free trade will lead to cheaper goods according to the real, not the nominal, value of money is in keeping with Wealth of Nations. And Morgan’s humane argument for free labor against the collusion of wage-fixing employers and magistrates is just as in line with Smith’s worldview.

Smith argues in Wealth of Nations that “Masters are always and every where in a sort of tacit, but constant and uniform combination, not to raise the wages of labour above their actual rate,” but that sometimes they go further to combine to depress wages, “with the utmost silence and secrecy, till the moment of execution.” The workers also collaborate, either defensively to avoid pay cuts or without provocation to increase their wages. The result, Smith thought, rarely favored the worker “partly from the interposition of the civil magistrate, partly from the superior steadiness of the masters, partly from the necessity which the greater part of the workmen are under of submitting for the sake of present subsistence…” (I.viii.13)

Smith thought the combinations of “masters” in particular would be broken by quickly increasing wealth—a growing economy was better for the worker than a static but wealthier economy. Growth creates enough demand for labor to force masters to negotiate on wages (I.viii.17). Smith had little faith, however, in labor laws. He clearly disliked the use employers made of magistrates in fixing wages in his own day, and he remarked of wages that “experience seems to show that law can never regulate them properly, though it has often pretended to do so” (I.viii.34).[4]

Ultimately, Morgan’s description of the nineteenth-century economy, a culmination of centuries of income growth that finally arrived at free negotiation between employer and employee, resembles Smith’s belief that growing wages arise from increasing wealth and will eventually create the conditions for freer labor negotiation. Morgan’s arguments on both labor and trade are sometimes a little too pat—Smith did not recognize an “unwritten law” that wages would inevitably rise, for example—and contain nineteenth-century developments that Smith could not foresee, such as the growing legal recognition and popularity of trade unions. But overall the chapter depicts a nineteenth-century man trying to convince deeply traditional medieval villagers that their economic lives would improve under an economic framework similar to that urged by Adam Smith.


Corn-pone and Sentiments
Perhaps an even more uncanny resemblance exists between Smith’s moral psychology and Twain’s attempts, late in life, to grapple with the moral and political foundations of human nature. Smith’s moral psychology, laid out in his Theory of Moral Sentiments, rests on the sympathetic instincts in human nature: observing others not only in their actions and circumstances, but also their praise and condemnation. “Nature, when she formed man for society, endowed him with an original desire to please, and an original aversion to offend his brethren,” Smith wrote, “She taught him to feel pleasure in their favourable, and pain in their unfavourable regard” (III.2.6).

But morality consists not merely in seeking the approval of others, but being worthy of that approval, even when no one is watching. (III.2.1.) To this end, Smith introduces the idea of an “impartial spectator,” a “higher tribunal” by which a person judges his or her own actions via an inward observer, free of interest and with all the information of fact and motive that public opinion often lacks (III.2.32). Moral psychology involves an upward growth, for Smith, from sympathy to sociability to an internalization and perfection of sociable moral standards.

Twain presents a form of moral psychology analogous to Smith’s, though he stops short of taking the inward turn to the “higher tribunal” of the impartial spectator. Twain’s posthumous 1901 essay, “Corn-PoneOpinions”  tells the story of a slave who lectures Twain from a stump, telling him “You tell me whar a man gits his corn-pone,[5]  en I’ll tell you what his ‘pinions is” (92).[6] Twain took the slave’s message to be that people must consciously share in the opinions of the community that provide their bread, a viewpoint Twain accepted with the caveats that he did not believe people had original ideas before receiving them from the community and that their conformity was not usually as intentional or mercenary as the slave suggested (93).

Twain instead argues that the first need a person must fulfill is “self-approval,” but that “a man’s self-approval, in the large concerns of life, has its source in the approval of the people about him” (95). Twain invokes the language of the Scottish Enlightenment on sociability and sympathy. “We know it is a matter of association and sympathy, not reasoning and examination,” Twain wrote, “that hardly a man in the world has an opinion upon morals, politics, or religion which he got otherwise than through his associations and sympathies” (95-96). The result was a “Conformity” that arose from “the human being’s natural yearning to stand well with his fellows, and have their inspiring approval and praise . . . (96)”

Even economic opinions fall under this scrutiny. Despite the earlier confidence he showed in free trade in A Connecticut Yankee, Twain confesses that he studied the question of free trade “and didn’t arrive.” For Twain, what people think about that issue, or the gold or silver standards, or any other economic issue, comes down to feeling with others, not thinking the matter out (97).

Twain tempers this claim in another essay, What is Man?, which he began before “Corn-Pone Opinions” but revised after it. In the essay, a wise Old Man in dialogue with a Young Man utters an invariable law that “From his cradle to his grave a man never does a single thing which has any FIRST AND FOREMOST object but one—to secure peace of mind, spiritual comfort, for HIMSELF” (136). Almost immediately, the Old Man goes down a similar path as “Corn-Pone Opinions”—soldiers go off to war and Alexander Hamilton went to his death in a duel, not from principle, but because public approval or fear of disapproval paradoxically made the heroically daring option the most comfortable to the peace of mind of the actors, even if it may be morally objectionable (137-138). Pressed by the Young Man to consider the genuinely altruistic actions of people who take risks and make sacrifices when no one is watching, the Old Man concedes that such people exist “here and there,” but argues that they do what they do because to watch another suffer “would give them pain. They would save the fellow-being on that account. They wouldn’t do it otherwise” (142). All was, in the end, this “spiritual comfort.”

In many ways, however, the foundation of the Old Man’s position—which is, for all appearances, Twain’s own—is roughly the same as Smith’s. Morality rests on sympathy—on deep attention to circumstance, the natural bonds of feeling that commiserate with affliction or joy. Human beings learn from the approval or disapproval of others, but that is not the final consideration for either Smith or Twain. There are important differences.

Smith’s “impartial spectator” provides something more like a moral regimen through which people morally regulate themselves even when no one else is looking. For both, morality rested not in the usual philosophical or religious preoccupations with ultimate truths, but rather learning to live—and act so as to live—with the swarm of sympathies that make up life.

[4] All citations to Adam Smith in this essay come from The Glasgow Edition of the Works and Correspondence of Adam Smith, 8 vols. (Indianapolis, IN: Liberty Fund, 1982).

[5] A type of corn bread. The slave is asking Twain to look to where a man gets his bread or sustenance—in other words, who pays to sustain him.

[6] Citations for “Corn-Pone Opinions” and What is Man? are taken from, Mark Twain, What Is Man? And other Philosophical Writings, ed. Paul Baender (Berkeley, CA: University of California Press, 1973). For publication information on What is Man? see ibid., 11-15.