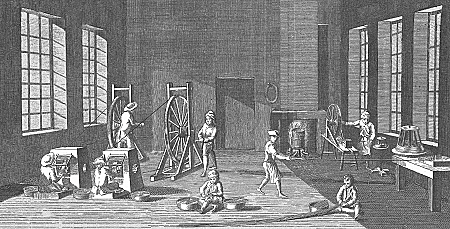 August 7, 2019
Introduction
Division of labor is one of the most important concepts in social science, not just for economics but for the study of societies in general. Many scholars, such as Ibn Kalduhn in the 14th century, or Emile Durkheim in the 20th, have considered the importance of division of labor for how societies function. But Adam Smith’s discussion in The Wealth of Nations united two key concepts: division of labor as a motor for generating prosperity, and market systems based on self-interest as a fuel for that motor.
Lionel Robbins famously gave a definition of his field:"Economics is the science which studies human behaviour as a relationship between ends and scarce means which have alternative uses."Although Robbins is rightly seen as one of the foremost free market economists of the early 20th century, we have been ill-served by this narrow and technical definition. By comparison, Adam Smith had this to say:

Political economy, considered as a branch of the science of a statesman or legislator, proposes two distinct objects: first, to provide a plentiful revenue or subsistence for the people, or more properly to enable them to provide such a revenue or subsistence for themselves; and secondly, to supply the state or commonwealth with a revenue sufficient for the public services. It proposes to enrich both the people and the sovereign. (Smith, 1776, Book IV).

Smith titled his book An Inquiry Into The Nature and Causes of the Wealth of Nations. In the first three chapters of that book he answers the implied question—what causes wealth?—simply: Division of labor. Wealth is stuff, not money. The amount of stuff people can use and consume is increased by expanding division of labor. In fact, division of labor “wants” to be global, because (to quote the title of Chapter 3 of Book I): “The Division of Labor is Limited by the Extent of the Market.”

The reason that division of labor increases wealth, if voluntary exchange is allowed, is what economists call “increasing returns.” If four people separately produce everything each one needs, each will be independent but very poor. If the same four people specialize, with one making shoes and clothing, one growing grain and vegetables, one focusing only on hunting for meat, and one becoming skilled in making and repairing housing, then the cooperating group will be wealthier by far than when they were living independently.
Such artisanal specialization was common in the Stone Age, and explains why many of us still have ancient guild names: Coopers made barrels. Bakers made bread. Smiths worked with iron. Barber, Brewer, Shoemaker, Skinner, Tailor: the knowledge that allowed a single artisan to have a trade and make a living is a way of increasing wealth. But it is not yet division of labor, because it is not yet commerce. Commerce requires (among other things) the division of labor within a specialization. Since, as Smith pointed out, division of labor is limited by the extent of the market, the greater the expansion of commerce to new participants the greater the increase in “opulence,” as Smith charmingly called it, for everyone.

In our example that would mean that all four people in the small community join together in a single enterprise, making (for example) pins. Even if one of the four had already been making pins as an individual artisan, the division of the tasks of pin-making among the four would result in far more than four times as many pins being made. This is the “increasing returns” part of division of labor. Suppose a skilled pin-making artisan, working alone but having practiced for years, could make 100 pins per day. Consequently, even if all people became skilled artisans they could make at most 400 pins per day. But if all four people worked on making pins on a production line, they could quickly organize themselves to make 1,000 pins or more per day. Under division of labor, four times the labor power yields much more than four times the total output of pins.


Of course, now the entire community is busy making just one thing: they have a big pile of pins, but no food or clothing. That’s why I said that division of labor requires a larger commercial setting, where people expect to be able to trade their pins for everything else they need. It is useful to consider some of the earlier discussions of division of labor, both to understand the concept better and to be able to better understand Smith’s unique contribution.

Precursors
Many historians of economic thought would likely say that the first “economist” was the Greek didactic poet Hesiod, who wrote “Works and Days” somewhere around 700 BCE. At first glance it would appear that Hesiod was more pre-Robbins than pre-Smith, because Hesiod focuses on scarcity: “He settled down near Helikon, in a settlement afflicted with human woes, Ascra by name. It is a place that is bad in the wintertime, difficult in the summertime. It is a place that is never really good.” Hesiod had little to say about division of labor, and mostly described the problem of how to run a farm on land that “is never really good.”

But that was the last time this notion of economics ignoring division of labor was accurate. Even by the time of Xenophon, just 350 years later, we learn:

For just as all other arts are developed to superior excellence in large cities, in that same way the food at the king’s palace is also elaborately prepared with superior excellence. For in small towns the same workman makes chairs and doors and plows and tables, and often this same artisan builds houses, and even so he is thankful if he can only find employment enough to support him. And it is, of course, impossible for a man of many trades to be proficient in all of them. In large cities, on the other hand, inasmuch as many people have demands to make upon each branch of industry, one trade alone, and very often even less than a whole trade, is enough to support a man: one man, for instance, makes shoes for men, and another for women; and there are places even where one man earns a living by only stitching shoes, another by cutting them out, another by sewing the uppers together, while there is another who performs none of these operations but only assembles the parts. It follows, therefore, as a matter of course, that he who devotes himself to a very highly specialized line of work is bound to do it in the best possible manner. (333; emphasis added).


There are two things to note here. The first is that the amount, and quality, of production, is much higher under division of labor. This is the very definition of wealth, of course. The second is that the system was irreversible: if the society had tried to return to a system of autarky, with each household supplying all its own needs, the result would not have been impoverishment, but starvation.

As Plato put it, in the Republic:

(Socrates) A State, I said, arises, as I conceive, out of the needs of mankind; no one is self-sufficing, but all of us have many wants. Can any other origin of a State be imagined?

(Adeimantus) There can be no other.

(Socrates) Then, as we have many wants, and many persons are needed to supply them, one takes a helper for one purpose and another for another; and when these partners and helpers are gathered together in one habitation the body of inhabitants is termed a State… And they exchange with one another, and one gives, and another receives….that the exchange will be for their good. (Republic, Book II)

Plato’s “state” is a city, in this case Athens. It’s true that Athens depended on division of labor, but having a large group of unorganized people does not automatically cause division of labor. Division of labor, as Smith pointed out with breath-taking simplicity, is limited by the extent of the market.


Smith’s Contribution
What, then, was and is Smith’s contribution? He identified three distinct and powerful reasons why division of labor dramatically increases the quantity produced by a market system. And he recognized that division of labor is limited only by the extent or size of that market. This latter insight is the most important, because it has the most striking implications for the creation and destruction of humanly devised institutional constraints on cooperation and competition.

Smith lays out the theory at the very outset of the Wealth of Nations. The first sentence in the whole book makes clear what his subject will be:

The greatest improvement in the productive powers of labour, and the greater part of the skill, dexterity, and judgement with which it is any where directed, or applied, seem to have been the effects of the division of labor.

Later, in Chapter 5, Smith gives the essential definition. I have written the quote itself out as bold text, with my explanation following: “This great increase of the quantity of work, which, in consequence of the division of labour, the same number of people are capable of performing…”


Consequences:
There’s a lot built into Smith’s assertion, “That the division of labor is limited by the extent of the market.” The claim can be interpreted statically: if our group of four people gains access to a larger market for their pins, they might add workers; the number of workers they would add would depend on how many more steps in division of labor are required to serve the larger market. As I already noted, Smith believed that there were 18 steps in his pin factory example, but there is nothing fixed about this number. It is perfectly possible that, if a larger market became available, the number could expand to 25, or more.

But the dynamic force might push the other way: with division of labor, markets “want” to be larger, and in fact to be global. If you have a successful pin factory, and there are additional workers to be hired, you are likely to try to seek out new external markets for your products. You will try to expand your ability to ship pins, to invent ways to transport pins more cheaply, and to find new retail outlets in other countries.
Of course, these other countries likely have pin factories of their own. But they have not pursued division of labor to the degree that you have, and so your prices are lower and your quality is better. There is likely to be political opposition, and people will decry the consequences of globalization and foreign influence. Division of labor not only drives world markets, but also world politics.

You have to give Smith credit. In important ways, he foresaw many of the promises, and some of the problems, created by division of labor in economic production.