Grateful to Whom, or What? 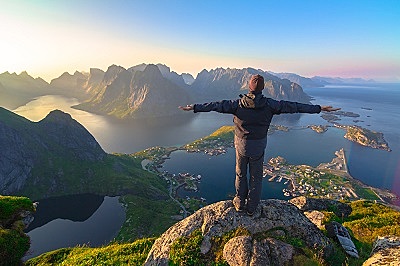 April 15, 2020
My dear George Mason Economics colleague Donald Boudreaux looks back “with enormous gratitude” on his 61 years of life. The expression, he says, “isn’t about his parents.” He expresses his gratitude for the blessing of the modern world. Bryan Caplan, another dear colleague, expresses his gratitude similarly. And Jonah Goldberg, in his great book Suicide of the West, writes of the gratitude we all should feel for what he calls “the Miracle” of liberal civilization (pp. 16-9, 118-19, 277, 350-1).
Caplan and Goldberg say what they grateful for, but not whom or what they are grateful to.  But Boudreaux does: “Thank you, modernity. Thank you, market-tested innovation. Thank you, private property and the rule of law.”
Their welcome sentiments offer an occasion to explore the spirit of gratitude. Adam Smith writes: “[B]efore any thing can be the proper object of gratitude or resentment, it must not only be the cause of pleasure or pain; it must likewise be capable of feeling them” (TMS 94.3).
Let us suppose that Jim feels gratitude to his benefactor Bob. Smith says that “before any thing [such as Bob]...can be the complete and proper object” of gratitude, “it must be the cause of pleasure,” “it must be capable of feeling those sensations,” and “it must not only have produced those sensations, but it must have produced them from design, and from a design that is approved of” (96.6).
Smith goes further: “What gratitude chiefly desires, is not only to make the benefactor [Bob] feel pleasure in his turn, but to make him conscious that he meets with this reward on account of his past conduct, to make him pleased with that conduct, and to satisfy him that the person [Jim] upon whom he bestowed his good offices  was not unworthy of them” (95.4).
Query set 1: Is gratitude-to an inherent facet of gratitude? That is, can gratitude exist as gratitude for something without being gratitude to someone or something?
If it can, should we call it gratefulness (rather than gratitude)?
On the other hand, if gratitude-to is an inherent facet of gratitude, then to whom or what are Caplan and Goldberg grateful?
Query set 2: Boudreaux expresses gratitude to modernity, market-tested innovation, private property, and the rule of law. Do those things work in the Smith passages above? Can they enter into Boudreaux’s joys and comforts, and reflect on his feeling of gratitude? Do they act with a design to aid Boudreaux?
Query set 3: Perhaps one would say that Boudreaux, Caplan, and Goldberg speak in a summary way of the many individuals whose actions have brought forth the blessings they enjoy. It is to those myriad individuals that they are grateful. If so, does it matter that those individuals don’t in fact know anything of their enjoyments, nor their gratitude, had multifarious designs, and in fact may now be deceased? If Bob is deceased or unidentified, how is Jim “to make him conscious that he meets with this reward on account of his past conduct” etc.?
Just prior to the passages quoted above, Smith writes:

We conceive... a sort of gratitude for those inanimated objects which have been the causes of great or frequent pleasure to us. The sailor, who, as soon as he got ashore, should mend his fire with the plank upon which he had just escaped from a shipwreck, would seem to be guilty of an unnatural action. We should expect that he would rather preserve it with care and affection, as a monument that was, in some measure, dear to him... The house which we have long lived in, the tree whose verdure and shade we have long enjoyed, are both looked upon with a sort of respect that seems due to such benefactors. The decay of the one, or the ruin of the other, affects us with a kind of melancholy, though we should sustain no loss by it. The Dryads and the Lares of the ancients, a sort of genii of trees and houses, were probably first suggested by this sort of affection which the authors of those superstitions felt for such objects, and which seemed unreasonable, if there was nothing animated about them. (94.2)

Similarly, in the History of Astronomy, Smith writes:

The reverence and gratitude, with which some of the appearances of nature inspire him, convince him that they are the proper objects of reverence and gratitude, and therefore proceed from some intelligent beings, who take pleasure in the expressions of those sentiments. With him, therefore, every object of nature, which by its beauty or greatness, its utility or hurtfulness, is considerable enough to attract his attention, and whose operations are not perfectly regular, is supposed to act by the direction of some invisible and designing power.... The tree which now flourishes and now decays, is inhabited by a Dryad, upon whose health or sickness its various appearances depend. (EPS, 49)


Query 4: How neatly does what Smith says about a “complete and proper object” of gratitude fit gratitude to God?
Smith writes: “Gratitude and resentment...are in every respect, it is evident, counterparts to one another” (TMS, 76.7). He writes:

We are angry, for a moment, even at the stone that hurts us. A child beats it, a dog barks at it, a choleric man is apt to curse it. The least reflection, indeed, corrects this sentiment, and we soon become sensible, that what has no feeling is a very improper object of revenge. When the mischief, however, is very great, the object which caused it becomes disagreeable to us ever after, and we take pleasure to burn or destroy it. We should treat, in this manner, the instrument which had accidentally been the cause of the death of a friend, and we should often think ourselves guilty of a sort of inhumanity, if we neglected to vent this absurd sort of vengeance upon it. (TMS, 94.1)

Friedrich Hayek used “resent” in criticizing “social justice” and in advancing the atavism thesis about modern collectivist politics. He wrote:

Their demand for a just distribution in which organized power is to be used to allocate to each what he deserves, is thus strictly an atavism, based on primordial emotions. (Hayek 1979, 165)

But these habits had to be shed again to make the transition to the market economy and the open society possible. The steps of this transition were all breaches of that ‘solidarity’ which governed the small group and which are still resented. (1979, 162)

It was this unavoidable attenuation of the content of our obligations, which necessarily accompanied their extension, that people with strongly ingrained moral emotions resented. (1978, 66)

Hayek said that “social justice” is “an attempt to satisfy a craving inherited from the traditions of the small group but which is meaningless in the Great Society of free men” (1976, 67, italics added). Hayek (1988, 140) suggested that “perhaps most people can conceive of abstract tradition only as a personal Will.” He then asked: “If so, will they not be inclined to find this will in ‘society’ in an age in which more overt supernaturalisms are ruled out as superstitions?”
Query set 5: If the resentment that some people feel toward liberal institutions (‘capitalism’) is superstitious and atavistic, would we say the same for the gratitude of Boudreaux, Caplan, and Goldberg? If not, why not?


Daniel Klein is professor of economics and JIN chair at the Mercatus Center at George Mason University, where he leads the Adam Smith Program at GMU Econ.