Frankenstein Through the Eyes of Adam Smith 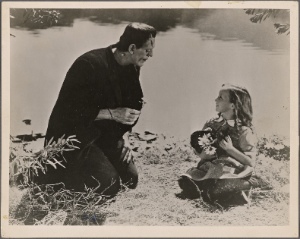 October 29, 2021
In the spring of 2021, AdamSmithWorks sponsored a Virtual Reading Group led by Dr. Caroline Breashears to explore the connections between Adam Smith’s The Theory of Moral Sentiments and Mary Shelley’s Frankenstein. The Virtual Reading Group was a follow-up to a lecture Dr. Breashears had given at the Liberty Fund in April 2019, celebrating the 200th anniversary of the publication of Shelley’s novel. A striking feature of Breashears’s talk was her departure from the usual interpretive frameworks for reading Frankenstein. She argued that the ideas of Smith’s The Theory of Moral Sentiments can shed light on the themes and tensions that move the novel forward. This essay expands upon Breashears’s reading of Frankenstein by suggesting that at the heart of Shelley’s novel are the workings of Smith’s understanding of three relationships: the relationship between sympathy and the passions, between beneficence and gratitude, and between justice and resentment.

Justice and Resentment
The monster’s story comes to a climax at the end of Book II with the monster’s resolute demand of Frankenstein: “You must create a female for me, with whom I can live in the interchange of those sympathies necessary for my being. This you alone can do; and I demand it of you as a right which you must not refuse.” (Shelley: 98). Frankenstein initially rejects the demand, saying he would never consent to such a bargain. The monster pushes on, making the case for insurmountable barriers separating him from the sympathy of human beings. If he cannot inspire benevolence and gratitude in others, then he will seek out revenge against his creator for the injuries that he has suffered. The monster says, “Have a care: I will work at your destruction, nor finish until I desolate your heart, so that you curse the hour of your birth.”
Gradually, Frankenstein’s position softens. He begins to see the monster as being “a creature of fine sensations.” For the first time, Frankenstein considers what he as the creator owes the creature. The monster, sensing a change in Frankenstein’s feelings, expands upon his offer and proposes taking his newly created partner away from the neighborhoods of men, if only Frankenstein will bring her into existence. While resisting the creature’s offer, Frankenstein is willing to listen as the monster presents his case, explaining the precariousness of his situation:

If I have no ties and no affections, hatred and vice must be my portion; the love of another will destroy the cause of my crimes, and I shall become a thing, of whose existence every one will be ignorant. My vices are the children of a forced solitude that I abhor; and my virtues will necessarily arise when I live in communion with an equal. I shall feel the affection of a sensitive being, and become linked to the chain of existence and events, from which I am now excluded. (Shelley: 100)


Frankenstein comes to feel a modicum of compassion for this pitiful creature who is all alone and was consumed by evil passions. Sympathy, along with a concern about the danger that the monster poses to himself and other humans, lead Frankenstein finally to consent to the monster’s request. He concludes that “justice” to both the creature and his fellow human beings demands it. With that, the creature quickly ends the conversation and leaves. Frankenstein is left wondering “perhaps (the monster) is fearful of any change in my sentiments.” (Shelley: 100). If so, the monster’s fears are justified because that is what happens in Book III.
From a Smithian perspective, at the end of Book II an important change has taken place in the relationship between Frankenstein and the monster. Until now, the question has been how sympathy binds—or does not bind—people together through the human passions of beneficence and gratitude. That world of shared feeling did not materialize for either Frankenstein or the monster. The flimsy sympathetic bonds between Frankenstein and the monster barely sustain a conversation much less allow for complex and adaptive forms of sociability to emerge. But another option for social cooperation is available: the world of contracts and justice where we bargain from positions of self-interest to get others to do things for us. The monster feels that he has been harmed by Victor Frankenstein and seeks to repair the damage by entering a formal contract.
Smith discusses the logic of this world of contract and justice in Part II of The Theory of Moral Sentiments and explains how it differs from that of beneficence and gratitude. This world looks at social interaction not through the kinder and forgiving passions but through the impartial lens of rights, injuries, duties, and obligations that are clearly defined in a complex social order and through which self-interest works its magic. Importantly for our purposes, the world of contracts and justice is backed up by a powerful and dangerous sentiment: resentment. People who violate the rules of justice and commit real harms to others find themselves exposed to the resentment of those they have harmed. For Smith, “The violator of the laws of justice ought to be made to feel himself that evil which he has done to another; and since no regard to the sufferings of his brethren is capable of restraining him, he ought to be overawed by the fear of his own.” (Smith: 82).
As readers familiar with the novel know, Frankenstein does not keep his promise to create a mate for the monster. After retreating to a lab in Scotland to begin his work, old fears arise about what he is doing. He ruminates that a newly created female might be “ten thousand times more malignant than her mate, and delight for its own sake, in murder and wretchedness.” (Shelley: 114) With its mate, this new fiend might spawn a whole new species to threaten humankind. Frankenstein has a change of heart. He reconsiders his promise and then decides to destroy the female creature, believing his duties and responsibilities to humankind outweigh his promise to the monster.
Watching this action from afar, the monster howls in “devilish despair and revenge” and withdraws from Frankenstein’s presence to plan his revenge. (Shelley: 115) And a wicked revenge it is. Spurred on by a growing resentment that he has been wronged and justice violated, the monster proceeds to nurse his resentment and seek revenge upon Frankenstein for his failure to fulfill his promise.
Book III of Frankenstein presents a playing out of the monster’s revenge upon Frankenstein. The monster kills friends, family and loved ones, and destroys Frankenstein’s reputation. Frankenstein responds in kind, seeking to kill his fiendish enemy, believing until the end of his life that it would be wrong to keep his promise to the creature.
Did the monster possess any rights that Frankenstein was compelled to recognize and act on? Probably not for Frankenstein, given that the monster existed outside the shared bonds of human fellow-feeling. From the monster’s perspective, there is a very different answer: A contract had been broken and rights had been violated. Resentment could be unleashed. In the end, Frankenstein and the monster are both consumed by resentments that drive their separate attempts to find justice in this world. The working out of Smithian sympathy and passion in Frankenstein is a great tragedy for all concerned.

Was Shelley a Smithian?
Given my reading of Shelley’s novel, should we consider her a Smithian? Does the novel reflect the moral framework found in The Theory of Moral Sentiments? My review of the biographical literature did not reveal any direct link between Smith’s moral thought and Shelley’s novel. The modest secondary literature on Frankenstein and Smith mentions nothing specific either. Breashears notes in her lecture that Shelley could have taken in a Smithian moral framework through her parents or husband, all of whom were familiar with it.
What about any direct evidence that Shelley was influenced by Smith? I believe the answer to this question is embedded in Shelley’s understanding of the operations of beneficence and gratitude, particularly in the passage discussed above where the monster desires to do good deeds for the De Lacey family. The monster recalls his beneficent actions towards the family before he had been seen and rejected.

When I returned, as often as it was necessary, I cleared their path from the snow, and performed those offices that I had seen done by Felix. I afterwards found that these labours, performed by an invisible hand, greatly astonished them; and once or twice I heard them, on these occasions, utter the words good spirit, wonderful: but did not then understand the significance of these terms.” (Shelley: 76-7).


Shelley is playing with her reader in this passage by having the monster state that the De Laceys believed that “an invisible hand” has done something. Perhaps the De Laceys believe that an invisible hand, maybe God, is responsible for their good fortune. However, the monster knows that he did a good deed, not God or any other supernatural force. There is no “good spirit” operating in the novel. Why then does Shelley raise the question of the “invisible hand”? Clearly, Shelley is not referring here to the familiar idea of the invisible hand of the market that economists since the time of Smith see as coordinating the activities of self-interested creatures to promote a common good. The actions of the monster are not based upon self-interest at all, but upon beneficence. She is alluding to part of another “invisible hand” process running throughout The Theory of Moral Sentiments: the invisible hand that coordinates the natural free-flowing operations of sympathy, beneficence, and gratitude working normally in human communities.4
A broader idea of “invisible hand” processes lies at the heart of much of Smith’s moral and economic thought. One of his few specific references to the actual term “invisible hand” occurs in Part IV of The Theory of Moral Sentiments where he explains how the passions work “to advance the interests of society, and afford means to the multiplication of the species.” (Smith: 184-5). Smith fervently believes, and Shelley surely agrees, that the operations of sympathy and the passions can tie us together and, at times, drive us apart. For the passions to unite us, we must be able to sympathize with other people and imagine the situations they face in their lives. Human beneficence, in turn, needs to be reinforced by expressions of gratitude for this invisible hand to work its magic. When gratitude is missing, ingratitude emerges. A war of one person against another may not be far behind. In her approach to sympathy and the passions in Frankenstein, Mary Shelley was a Smithian.
Thank you to Caroline Breashears for her comments and suggestions of an earlier draft of this essay.