by Glory Liu for AdamSmithWorks 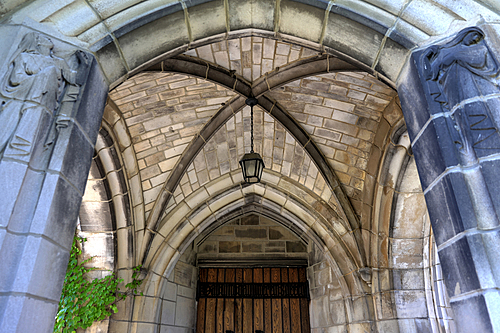 November 1, 2018
“Inventing the Invisible Hand: Adam Smith and the Chicago School of Economics”
If you were to ask someone what they know about Adam Smith, one of the most common responses you can expect is, “I know about the invisible hand.” Smith’s metaphor has become a hallmark of what we might refer to as “American capitalist doctrine,” and has become synonymous with the notion of self-interest—or more reductively, selfishness—over benevolence to promote the public good.
Smith scholars have long known that these popular representations of Smith’s ideas are misleading. Much of their work today focuses on Smith's ideas about sympathy, justice, social ethics, the duties of government, and the downsides of market societies, all of which challenge the common caricature of the invisible hand. But how, when, and why did such a selective reading and portrayal of Smith’s ideas emerge in the first place?
To try to answer this question, I look at how economists of the so-called “Chicago school of economics” read, taught, and appropriated Adam Smith’s ideas in the twentieth century.  Today, the University of Chicago is one of the most if not the most decorated institutions in the field of economics. The department boasts over a dozen Nobel Prizes in economics (including the most recent recipient, Richard Thaler) and John Bates Clark medalists. However, in its early years Chicago’s department of economics was considered unorthodox. In developing and championing Chicago price theory, Chicago economists used Adam Smith’s ideas in ways that influenced the field of economics and, more importantly, political ideas in the last quarter of the twentieth century. In this essay, I highlight several different ways that the Chicago school shaped one of the most enduring and recognizable interpretations of Adam Smith and the invisible hand.

Adam Smith and Chicago Economics in the 1930s and 1940s
In order to understand how Chicago economists were reimagining Adam Smith, it is first important to understand how they were trying to redefine the field of economics after the Great Depression. In the 1930s, Frank H. Knight and Jacob Viner laid the foundations for Chicago Price Theory, which became the foundation for modern microeconomic theory. Rather than looking to state or social institutions to explain economic phenomena and prescribe solutions to problems, Knight and Viner framed supply, demand, prices, and value as the most fundamental forces of economic behavior. Price theory claimed that in a competitive economy, prices were the most important signal of what individuals want and determine not just what is produced but how things get produced and who gets them. It was in Chicago Price Theory courses that many economics students would first encounter Adam Smith’s ideas in two important ways.
One of Smith’s examples that Knight and Viner seemed particularly fond of was the so-called “deer-beaver exchange” from An Inquiry into the Nature and Causes of the Wealth of Nations (hereafter Wealth of Nations) Book I, Chapter VI. In this passage, Smith describes how we understand value in terms of the opportunity cost of labor—how much a beaver should be valued is based on how many deer might be caught in the same amount of time. If it takes twice the labor to kill a beaver than it does a deer, for example, “one beaver should naturally exchange for, or be worth, two deer.”[1]
Knight and Viner repeatedly used this example not to illustrate that Smith’s theory was right, but that Smith was wrong. Modern economics rejects the idea that the essence of value is in labor—it is instead found in the power of a particular good to satisfy a need or desire. However, even though Smith was wrong, it was important to recognize his ideas in a longer perspective. Smith, the father of economics, was a historical mile-marker back at which twentieth-century students could look to recognize how far economics had progressed. Teaching Smith in this way reinforced the idea that he was the founding father of economics whose ideas, even when wrong, are still worth learning. More importantly, reminding students that Smith was an intellectual ancestor provided both lineage and legitimacy to an unconventional approach to economics.
Another prominent way Chicago school economists reimagined Smith was as a kind of role model for how to relate economic ideas to politics. Wealth of Nations demonstrated that economics could be as rigorous and objective as the natural sciences without losing relevance to politics. However, Knight and Viner’s generation—which Steven Medema has called the “old Chicago school”—did not characterize Smith as a one-sided ideologue who stood for laissez-faire politics. In fact, both Knight and Viner strongly resisted ideological readings of Smith’s ideas and criticized many interpretations of Smith’s political economy as being “oversimplified and perhaps too emotional and one-sided.” [2]  Viner was one of the first economists to emphasize the importance of reading Smith’s The Theory of Moral Sentiments alongside Wealth of Nations. He emphasized that Smith’s notion of laissez-faire (a term Smith did not use) did not imply that all government activity was bad. On the contrary, Smith allowed for a “wide and elastic range of activity for government” that would support a free and flourishing society.[3]
Thus, the “old Chicago school” of Knight and Viner portrayed Smith as a multifaceted economist whose ideas not only paved the way for modern economics—specifically, Chicago Price Theory—but also provided a model for the relationship between economic science and politics. However, the next generation of economists, which I will refer to as the “new Chicago school,” would radically change this vision of economics and of Adam Smith’s ideas.


[1] WN I.vi (p. 65). The example appears in Jacob Viner’s 1930 lectures in Economics 301, numerous iterations of Knight’s version of the course between 1930 and 1939, and also in Knight’s earlier article on “A Suggestion for Simplifying the Statement of the General Theory of Price” published in 1928.

[4] Stigler was quite proud of this epithet, as he recalled in his 1976 article: “There is a game I sometimes play with children; I call it ‘Three Questions.” If all three questions are answered correctly I promise $1 million…The first two questions present no difficulty: perhaps the number of brothers and sisters the child has, and the city in which it lives. The third question is a different matter. Once I asked, “Who was Adam Smith’s best friend?” The reply from this child was, “You are, Uncle George.” I had someone like David Hume or James Hutton or Joseph Black in Mind. Still I have long been a good friend of Smith, though I have no right to claim priority in his circle.” Stigler, “The Successes and Failures of Professor Smith,” 1200; Nathan Rosenberg, “George Stigler: Adam Smith’s Best Friend,” Journal of Political Economy, 1993, 833–48.