Raillery of Adam Smith: Praise-by-Blame in a 1764 Pamphlet on Slavery 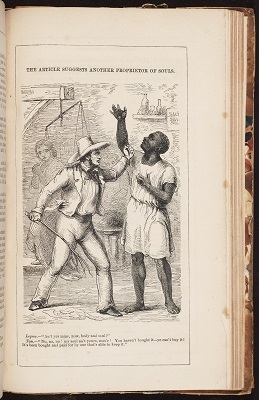 January 19, 2022
In 1764 there appeared in London an anonymous pamphlet, An Essay in Vindication of the Continental Colonies of America, from A Censure of Mr Adam Smith, in his Theory of Moral Sentiments. With some Reflections on Slavery in General. The title page says “By an AMERICAN.” The pamphlet has often been misunderstood by modern scholars. On the surface the pamphlet rebuts Adam Smith for a passage in The Theory of Moral Sentiments (TMS)—the famous passage condemning the slave trade. But the pamphlet misconstrues the passage as Smith censuring American colonists as base “wretches” and the “refuse of the jails of Europe”.
It is clear that Smith was referring principally to slave ship crews, who often had spent time in jails or faced imprisonment. The pamphlet’s true intent was to honor Smith and to promote his rebuke of the slave-trade and slavery in general. Also, the misconstrual of Smith satirizes the miscommunication and misunderstanding between the American colonies and Britain, a problem made inevitable by the ocean between them.
The feigned misconstrual leads the reader into the final 40 percent of the pamphlet, where the text suddenly launches into an all-out condemnation of slavery. Indeed, the pamphlet was recognized as such by the American abolitionist Anthony Benezet and the chronicler of the anti-slave-trade movement Thomas Clarkson.
Authorship of the pamphlet has been attributed to Arthur Lee. We doubt that attribution and suppose that the invisible hands behind the pamphlet were British satirists of the day. In future work we will explain why we are convinced that the author of Essay in Vindication was not Arthur Lee and speculate about the identity of the true authors. We discuss the pamphlet in a scholarly article forthcoming at American Political Thought and posted at SSRN.
In the passage, original to the 1759 first edition, the first sentence sneakily leads the reader into the subject of slavery; it sets up the second sentence:

There is not a negro from the coast of Africa who does not, in this respect, possess a degree of magnanimity which the soul of his sordid master is scarce capable of conceiving. Fortune never exerted more cruelly her empire over mankind, than when she subjected those nations of heroes to the refuse of the jails of Europe, to wretches who possess the virtues neither of the countries which they come from, nor of those which they go to, and whose levity, brutality and baseness, so justly expose them to the contempt of the vanquished.


The sublime passage is reproduced in full not once but twice in the 1764 pamphlet supposedly written by “an AMERICAN.” Recent research into Smith’s passage shows that it was significant in advancing the movement against slavery and the slave-trade.
At that time, anonymous satirical writing was common. Edmund Burke’s first major publication, in 1756, A Vindication of Natural Society, was anonymous and satirical. He wrote to Elizabeth Montagu in 1763, six months prior to the publication of Essay in Vindication:

Madam I observe that Panegyric, even when applied to those who deserve it most or like it best is sure never to please above one, and will certainly offend fifty. To say the truth Satyr is now so much the safer and (what is now the only rule of right) the more popular way, that I am resolved to stick to that… (29 July 1763, in Burke 1958, 171)


The pamphlet was produced in that same spirit. The satire was directed at the type of person who could possibly misconstrue Smith’s words.
But the pamphlet is also a raillery of Adam Smith. In his book on the use of irony from 1500 to 1755, Norman Knox (1961) explains that one type of raillery “was praise-by-blame irony; under the clever hand of the rallier mock faults turned into real virtues and mock ridicule turned into real praise” (196). Jonathan Swift explained, “Raillery was to say something that at first appeared a reproach or reflection; but, by some turn of wit unexpected and surprising, ended always in a compliment, and to the advantage of the person it was addressed to” (Swift as quoted in Knox 1961, 198, 203).
The pamphlet pretends to defend American colonists from unjust censure by Smith. The first 60 percent takes for granted that Smith censured American colonists as “refuse of the jails of Europe.” The final 40 percent of the , however, is a full-scale assault on slavery. The end of the Essay returns to the ruse with which the pamphlet began, and with an irony that is quite evident once one has traced the satirical thread. 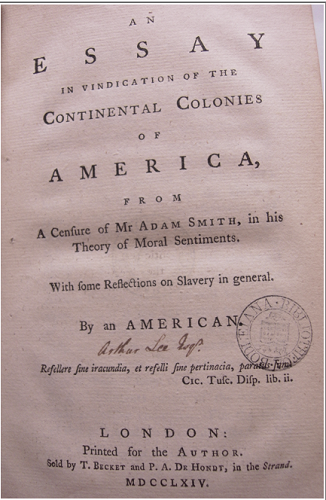 The second sentence of Smith’s passage is clearly aimed at the slave-trade: “Fortune never exerted more cruelly her empire over mankind, than when she subjected those nations of heroes to the refuse of the jails of Europe, to wretches who possess the virtues neither of the countries which they come from, nor of those which they go to, and whose levity, brutality and baseness, so justly expose them to the contempt of the vanquished” (emphasis added).
John Newton was the slave ship master who later in life turned abolitionist and wrote the song “Amazing Grace;” he was portrayed in the 2006 film Amazing Grace. In an unpublished letter 1752 about mastering slave ships Newton wrote: “We are for the most part supplied with the refuse and dregs of the nation. The prisons and glass houses furnish us with large quotas and boys impatient of their parents and masters, or already ruined by some untimely vice and for the most part devoid of all good principles” (Newton 1962, xiv). It is striking that Newton in 1752 speaks of the “refuse” from “prisons” while in 1759 Smith writes of “the refuse of the jails of Europe.” Scholarship on the slave ship crews makes clear that many of the crewmen had come from jails or faced imprisonment, often because scheming “crimpers,” working with the slavers, ensnared wayward young men into a situation of having to choose between imprisonment and signing away their debt by signing on to a slave ship voyage (Christopher 2006, 31-32; Rediker 2007, 225-228).
Smith’s description clearly would not fit an American slaveholder, for the colonists were with few exceptions not from the jails of Europe and did not come from one country and go to another—and, especially, not to another that differs sharply in social morals. Plainly, it is the slave traders who were the “wretches,” lacking the virtues of the lands traversed.
The pamphlet’s ruse may have served another purpose: To highlight misunderstandings between the American colonists and the political class in London. The pamphlet appeared about two months before The Sugar Act was passed on April 1764. The next year saw the Stamp Act. In 1775 Burke explained in the Speech on Conciliation with the Colonies: “[I]it is not merely moral, but laid deep in the natural constitution of things. Three thousand miles of ocean lie between you and them. No contrivance can prevent the effect of this distance in weakening government. Seas roll, and months pass, between the order and the execution; and the want of a speedy explanation of a single point is enough to defeat a whole system” (Burke 1999, 242). He reminds British Parliamentarians: “Your children do not grow faster from infancy to manhood, than [the Americans] spread from families to communities, and from villages to nations” (228). Miscommunications and animosities are quite inevitable: “[C]onsider, I implore you, that the communication by special messages, and orders between these agents and their constituents on each variation of the case, when the parties come to contend together, and to dispute on their relative proportions, will be a matter of delay, perplexity, and confusion that never can have an end” (282).
The remoteness of North America made it impossible for the British to do much more than practice benign neglect and enjoy free trade with the colonies. To attempt to extract much in taxation would generate misunderstandings, suspicion, and hostility. The pamphlet’s satirical misconstrual of the North Briton’s words by “an AMERICAN” may have played upon troubles in understanding between Britain and the Colonies, stemming from “the natural constitution of things.” If so, the satire could be said to have had the compounded purposes of ending the slave-trade, abolishing slavery, avoiding war, and pushing a speedier independence for the American colonies.

* Kendra Asher received her PhD in economics at George Mason University in 2021. In one of the chapters of her dissertation on David Hume, she explores interpretations of Hume’s infamous footnote on race beyond the naïve interpretation.


References
Anonymous. 1764. An Essay in Vindication of the Continental Colonies of America, from A Censure of Mr Adam Smith, in his Theory of Moral Sentiments. With some Reflections on Slavery in General. London: Sold by T. Becket and P. A. De Hondt. [This pamphlet has been attributed to Arthur Lee—erroneously, we believe.]
Benezet, Anthony. 1766. A Caution and Warning to Great-Britain and Her Colonies, in a Short Presentation of the Calamitous State of the Enslaved Negroes in the British Dominions. Philadelphia: Henry Miller. Link
Benezet, Anthony. 1773. Brief Considerations on Slavery, and the Expediency of Its Abolition. Burlington: Isaac Collins. Link
Benezet, Anthony and John Wesley. 1858. Views of American Slavery, Taken a Century Ago. Philadelphia: Association of Friends for the Diffusion of Religious and Useful Knowledge.
Brown, Christopher L. 2006. Moral Capital: Foundations of British Abolitionism. Chapel Hill: University of North Carolina Press.
Burke, Edmund. 1958. The Correspondence of Edmund Burke. Volume 1: April 1744–June 1768. Ed. T.W. Copeland. Cambridge: Cambridge University Press.
Burke, Edmund. 1999. Selected Works of Edmund Burke, Volume 1. Ed. F. Canavan/E. J. Payne. Indianapolis: Liberty Fund.
Christopher, Emma. 2006. Slave Ship Sailors and Their Captive Cargoes, 1730-1807. Cambridge: Cambridge University Press.
Clarkson, Thomas. 1808. The History of the Rise, Progress, and Accomplishment of the Abolition of the African Slave-trade by the British Parliament. London: R. Taylor and Company, Shoe-Lane.
Klein, Daniel B. 2019. “Adam Smith's Rebuke of the Slave Trade, 1759.” The Independent Review 25(1): 91-98. Link
Knox, Norman. 1961. The Word Irony and Its Context, 1500-1755. Durham: Duke University Press.
Newton, John. 1962. The Journal of a Slave Trader 1750-1754, With Newton’s Thoughts upon the African Slave Trade. Ed. B. Martin and M. Spurrell. Epworth.
Rediker, Marcus. 2007. The Slave Ship: A Human History. New York: Penguin Books.
Smith, Adam. 1790. The Theory of Moral Sentiments. Eds. D. D. Raphael and A. L. Macfie. Indianapolis: Liberty Fund.