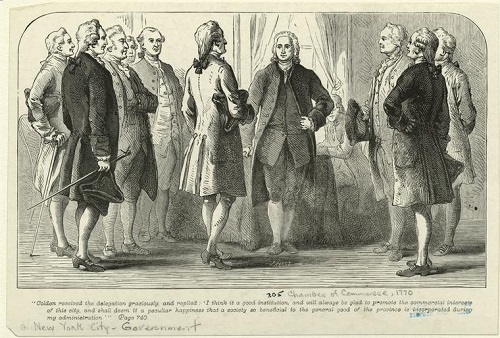 November 18, 2021
Honest commerce serves our own interests. But how does it relate to the duties of beneficence or serving the good of others?
In his 1828 Philosophy of the Active and Moral Powers of Man, Dugald Stewart reflects on Adam Smith’s place in the history of moral philosophy. When we consider Smith’s thought in historical context, he claims,

our attention is naturally directed to … the inquiries of Dr. Butler, in preference of any other author, ancient or modern. At the time when Smith began his literary career, Butler unquestionably stood highest among the ethical writers of England; and his works appear to have produced a still deeper and more lasting impression in Scotland than in the other part of the island. Of the esteem in which they were held by Lord Kames and Mr. Hume, satisfactory documents remain in their published letters; nor were his writings less likely to attract the notice of Mr. Smith, in consequence of the pointed and unanswerable objections which they contain to some of the favourite opinions of his predecessor Dr. Hutcheson.1


Smith’s thinking resembles Joseph Butler’s on several fronts. Smith follows Butler in emphasizing the moral authority and superiority of conscience; the dangers of self-deception and moral corruption; and the social and political importance of the passion of resentment.
Butler’s early works took on Mandeville and Hobbes, framing the activities of modern commercial society as consistent with the teachings of Christianity.2 In his later sermons he presented a vision of honest commerce as a dignified activity. Honest commerce enables one to cooperate with God in furthering the good of society. Butler’s treatment of self-love and effective beneficence in relation to commerce highlights a possible source of Smith’s political economy, understood as a province of moral philosophy.
Against Mandeville and Hobbes, Butler frames self-love, properly understood, as morally legitimate. The “confusion and perplexity in the Epicureans of old, Hobbes, [La Rochefoucauld], and this whole set of writers”—writers who denigrate self-love as vice—lies in their failure to distinguish between “cool or settled selfishness, and the other or passionate or sensual selfishness.”3 It is clear on reflection that there is a meaningful difference between self-love and desire gratification. Following Butler’s lead, Smith notes that it is in our “cool hours” that we lay “down to ourselves … what [is] most proper for us to pursue” (TMS VII.ii.15). Acts of self-love are acts that serve our interests. Our interests are clearly not served by indiscriminately satisfying any and every desire. Momentary anger or the lure of various temptations sometimes lead us to act in ways that we regret and can therefore not be viewed as acts of self-love.
Once we distinguish between self-love and desire gratification, we may agree that serving our self-love, so long as it does no harm to anyone else, is approved of by every fair and impartial spectator. All people, Butler says, have a moral obligation “not to neglect what they really owe themselves”; we are each “in a peculiar manner … intrusted with ourselves.”4 Smith tells us that “carelessness and want of oeconomy are universally disapproved of, … from a want of the proper attention to the objects of self-interest” (TMS VII.ii.3.16).
A Butlerian notion of self-love enters into Smith’s moral authorization of honest commerce, which centers around “the calm and dispassionate” “desire of bettering our condition” (WN II.iii.28).
The “sum of morals” for Butler is the “public end and interest of society.”5 When we consider the conduct of a person, Smith says, in a similar vein, we ought to evaluate it as “it may affect his own happiness; and … as it may affect that of other people” (TMS VI.i.intro). Governing our actions so that they serve our self-love is the object of prudence; governing our actions so that they serve the good of others is the object of beneficence. Honest commerce serves our own interests. But how does it relate to the duties of beneficence or serving the good of others?
“[I]t was this problem which faced the Church,” said R.H. Tawney in his 1922 Religion and the Rise of Capitalism, “[w]ith the expansion of finance and international trade in the sixteenth century”:

Granted that I should love my neighbor as myself, the questions which, under modern conditions of large-scale organization, remain for solution are, Who precisely is my neighbor? And, How exactly am I to make my love for him effective in practice? To these questions the conventional religious teaching supplied no answer, for it had not even realized that they could be put.6


By the 1720s, however, Butler had such questions in full view. Across several sermons “Upon the Love of Our Neighbour” he argues that although “perfection of goodness consists in love of the whole universe,” we ought to focus our efforts more narrowly on “that part of mankind, that part of our country, which comes under our immediate notice, acquaintance and influence, and with which we have to do.”7 Butler’s reasoning is that our capacities are too limited for our beneficence to be effective much beyond the bounds of our spheres of familiarity. Our obligations cannot exceed our abilities and knowledge.
The same point comes across in Smith in the final edition of TMS. He writes that the idea of increasing the happiness of the whole of humankind is, of all “objects of human contemplation”, “by far the most sublime” (TMS VI.ii.3.5). Yet the person of virtue shouldn’t act in conscious reference to the whole of humankind because knowledge of how to serve that whole effectively, at least in any direct manner, lies outside of our grasp. In tending to our focal spheres, we normally make the most becoming use of our own:

The administration of the great system of the universe … is the business of God and not of man. To man is allotted a much humbler department, but one much more suitable to the weakness of his powers and to the narrowness of his comprehension; the care of his own happiness, of that of his family, his friends, his country. (TMS VI.ii.3.6)


Observations in Butler and Smith on the limits of our knowledge and the scope of our duties of beneficence enter into their moral authorizations of commerce. Both conceive of commerce as a means of serving the common good. Butler urges diligent commerce and frugal saving to enable liberal and generous charity. Smith, especially in The Wealth of Nations, emphasizes how through honest commerce we cooperate, if only metaphorically, with others in a great social enterprise through the division of labor, an enterprise that increases general opulence. Both illustrate how in tending to our focal spheres, we often further ends beyond our intentions and may be said, in a sense, to “co-operate with the Deity” (TMS III.5.7) in serving human happiness.
Butler tells of how the “united labour of several, is sufficient to procure more necessaries than [each person] stand[s] in need of”; such labor gives rise to a surplus of goods and enables people to acquire wealth “by diligence, frugality, and prudent management.” Wealth, in turn, is shared as owners of estates hire labor, which serves to distribute output and “provide future necessaries in greater plenty.”8 The pursuit of honest income, like the desire for good reputation, leads individuals, by virtue of “the hands of Providence, to carry on ends, the preservation of the individual and good of society, which they themselves have not in their view or intention.”9
Butler elaborates how wealth enables charity, which we ought to undertake with an eye towards local causes. The virtues of economy, frugality, and diligence among merchants enable liberal giving. Diligent commerce, frugality, and liberality together constitute a cooperation with God: “The prerogative of riches is, that they increase our power of doing good. This is their proper use. In proportion as men make this use of them, they imitate Almighty God; and co-operate together with him in promoting the happiness of the world.”10
Butler obviously prefigures Smith’s idea of the invisible hand. In TMS the invisible hand leads the rich and powerful to “make nearly the same distribution of the necessaries of life,” against their immediate intentions, “which would have been made, had the earth been divided into equal portions among all its inhabitants, and thus without intending it, without knowing it, advance the interest of the society” (TMS IV.i.11).
Unlike Butler, Smith doesn’t emphasize how wealth enables us to give liberally of our possessions. But he does elaborate how we, in our pursuits of honest income, participate in a grand economic order. Through the division of labor we contribute to “that universal opulence which extends itself to the lowest ranks of people” (WN I.i.10). By participating in the market process we contribute to the “common stock” of goods and services, “where every man may purchase whatever part of the produce of another man’s talents he has occasion for” (WN I.ii.5). It is through the division of labor that we benefit others as though we were in “cooperation and assistance” with “great multitudes” (WN I.ii.2). Such remarks, when paired with his insights on the legitimacy of self-love and our limited capabilities for beneficence were rightly taken as an authorization of honest commerce as a means of effectively serving the good of humankind.
Considering Smith in conversation with Butler helps us draw out the ethical—and to some extent theological— basis for Smith’s authorization of commerce. As we pursue our focal interests within proper bounds we may very often be said to serve the good of the whole.