The Invisible Hand, Spontaneous Order, and a Pizza

How is an economy organized? 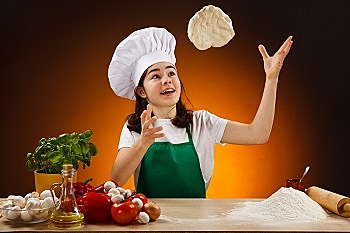 And what can Adam Smith- and a pizza- teach us?

“He intends only his own gain, and he is in this, as in many other cases, led by an invisible hand to promote an end which was no part of his intention.  Nor is it always the worse for the society that it was no part of it.  By pursuing his own interest he frequently promotes that of the society more effectually than when he really intends to promote it.  I have never known much good done by those who affect to trade for the public good.”  (WN, vol. 2, p. 456)

This lesson intends to make these ideas easier to understand by updating a famous story. The story, “I, Pencil,” was written by Leonard Read and published by the Foundation for Economic Education in 1958.  The story was popularized by Milton Friedman in his PBS series Free to Choose.  The ideas are relevant today.
The lesson begins with the teacher asking the students how many people it takes to make a pizza from scratch.  They will probably guess that it takes only one or two people.  The real answer is thousands.  The miracle of markets is that prices, profits, and losses in the product and labor markets are incentives that promote cooperation among individuals and benefit people through voluntary exchange.  No external force, no coercion, and no violations of freedom are needed to produce this cooperation.  The lesson reinforces these ideas with short videos “I, Pencil” and “An Animal That Trades, Part 1.”
Intended Audience
Middle school through Econ 101 students
Objectives
1.       Analyze how the invisible hand works better than the visible boot.
2.      Analyze why self-interested behavior has the unintended consequence of improving the lives of others.
3.      Describe how the invisible hand works.
Time: One class period
Materials
1.      Complementary Google slides
2.      “I, Pencil” video (6.32 minutes) produced by Competitive Enterprise Institute.
3.      Optional for higher-level students:  A copy of “I Pencil:  My Family Tree as Told to Leonard Read.”
4.      “An Animal That Trades: the Invisible Hand, Part 1” video (6.43 minutes)
Procedure
1.      Ask the students how many people it takes to make a pizza from scratch.  (They will probably guess one or two people.)
2.      Follow up by asking why they chose that number.  (They will probably say they were counting a person assembling the pizza, another person baking it.)
3.      Tell them that in fact it takes thousands of people and most of them don’t even know each other and might even dislike each other if they did.  Nevertheless, they all cooperate to make your pizza.  Using the complementary Google slides, explain why this is so.  Ask the students to suggest other steps that could be included in the processes.
4.      Ask the students how this can happen—how can thousands of people cooperate to make a pizza without the government ordering people to do so?  (Entrepreneurs and managers are always asking themselves three key questions:  What do we produce?  How much do we produce?  How do we produce it?  In a market economy, the signals are prices, profits, and losses.  A price is an incentive and reflects what buyers and sellers are willing to accept. A price tells buyers what they have to give up to get something, and it tells sellers what they can get for something.  Profits encourage production of a good or service and losses discourage production.  A pizza is just one example of how market processes work to create value and meet people’s needs.  That’s why wealthy countries use markets, not central planning, to allocate scarce resources.  Every day billions of people trade and compete in markets and thereby have created wealth and eliminated much of the poverty in the world.  According to the World Bank, half of the world is now middle class or rich.  Illiteracy, disease, and deadly violence are receding.  This is a result of the power of markets.)
5.      Show the video “I, Pencil”.  It illustrates the tremendous amount of social and economic cooperation that is required to produce something as simple as a pencil.  It’s a complex operation, and it all occurs by voluntary exchange.
6.      After the viewing, ask questions such as these:
a.       How many people know how to make a pencil?  (It takes the knowledge and skills of thousands of people.)
b.      Who organizes this activity?  (No one)
c.       How is all this social and economic cooperation made possible?  (Prices, profits, and losses are signals in a free market that create spontaneous order.  Price is a signal wrapped in an incentive.)
d.      What did the author and video producer want people to learn from this essay/video?  (Markets work.  Government attempts to control, plan, or direct the production of goods and services will probably fail.  Markets allow people to use and trade their skills, talents, knowledge, and labor freely.  This creates spontaneous order.)
7.      Nail down the main points by showing and discussing the video “An Animal That Trades: Part1”.  There are eight discussion questions that accompany the video.  The students should see how intellectual ideas can change the world.

Inquiry Question
You have been elected the president of a country with a disastrous economy.  Ineffective policies in the past have created this mess.  People look to you to get the economy back on track.  What policies would you recommend?
Conclusion
Every procedure involves multiple steps, and yet no one seems to have organized the process.  This is the invisible hand at work.