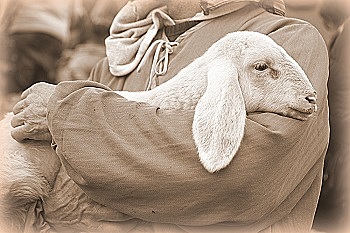 He described each stage within the context of people settled on an uninhabited island and how they would progress through each stage. He characterized the “Age of Hunters” around the imagined islanders’ efforts on the “hunting the wild beasts or catching the fishes (LJ:14).” The “Age of Shepherds” consisted of the islanders’ need “to tame some of those wild animals they caught” and continue to domesticate them for food and work as their numbers necessitated going beyond hunting and gathering (LJ:15). Smith continued next with the development of the “Age of Agriculture” when the “herds and flocks” would no longer support this fictional island society thus necessitating “the cultivation of land (LJ:15).” Smith ended with the “Age of Commerce” where the individuals of the island began to specialize and “separate” their work toward the betterment of “his welfare” (LJ:15). He noted that these individuals “would exchange with one another what they produced…and get one exchange for them the commodities” they needed and did not cultivate or create (LJ:15).
Smith used this Stadial Theory of civilizations to explore such topics as the origins of property rights, to explain military history and organization, and to explain and create maxims on the development of government administrations and state revenue systems. In exploring how property rights derived from possession, he highlighted the taming of animals, like in the “Age of Shepherds,” as an extension of property rights by possession “as long as they could be distinguished (LJ:18-20).”
With regard to military development, he highlighted the difference between the hunter and shepherd militaries in Wealth of Nations:

He continued and argued that “A nation of hunters can never be formidable to the civilized nations in their neighbourhood. A nation of shepherds may (WN:691).”
In exploring the development of state revenue systems, Smith used his Stadial Theory to demonstrate how a shepherd society derived revenue and noted that “The revenue of a Tartar or Arabian chief consists in profit… from the milk and increase of his own herds and flocks (WN:817).” He also stated that “It is… in this earliest and rudest state of civil government only that profit has ever made the principal part of the publick revenue of a monarchial state. (WN:817).” Smith described that in the most civil of societies the immense expenses of the state should “be defrayed by taxes of one kind or another; the people contributing a part of their own private revenue in order to make up a publick revenue to the sovereign or commonwealth (WN:824).” In other words, taxes upon the private revenue of individuals in the “Age of Commerce” should constitute the majority of state revenues.
Smith’s division and description of the progress of civilization contains key characteristics such as its linear trajectory and the different causes for the progress of his fictional island society. The first stage and the second stage transition in order to sustain a growing population. However, the third stage evolves due to the growth of labor specialization as individuals seek to fulfill their own “welfare.” Thus, a civilization’s progress began with an individual contributing to the community alone and ended with the individual contributing to the community by working toward their own well-being. Smith noted that liberty and security, supported by government, enabled individuals to pursue their own means to prosperity (WN:65-66, 345, 412, 687).
Sources:
Berry, Christopher J. Social Theory of the Scottish Enlightenment. Edinburgh: Edinburgh University Press, 1997.
Chen, Jeng-Guo S. “Providence and Progress: The Religious Dimension in Ferguson’s Discussion of Civil Society.” In Adam Ferguson; History, Progress and Human Nature, ed. Eugene Heath and Vincenzo Merolle, 171-186. London: Pickering & Chatto, 2008.
[1] See Christopher J. Berry’s Social Theory of the Scottish Enlightenment (Edinburgh: Edinburgh University Press, 1997), 68-70.