Adam Smith on the Country-City Debate

What is the "best place" to live- the city or the country? 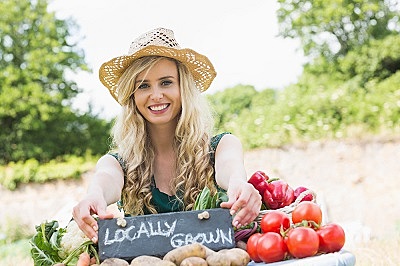 by Sarah Skwire for AdamSmithWorks
One of the ways in which Smith is particularly interesting and useful for current readers of his work is the intelligence with which he comments upon the ever-reviving debate between the country and the city. Much of the current country-city debate focuses on the question of food production, with arguments all over the popular press about the virtues of locavorism, the 100-mile diet, and the virtues of urban farming, and backyard chicken coops. Books like the battling duo of Michael Pollan’s The Omnivore’s Dilemma and Pierre Desrocher and Hiroko Shimizu’s The Locavore’s Dilemma keep the debate at the forefront of many conversations.
Certainly, there is much to be said for the independence to be gained by producing some of one’s own food on one’s own property. Anyone who has tasted a fresh garden tomato in the height of the summer season, or compared the difference in flavor between eggs from free-range chickens and from factory farmed chickens has a valid point to make. But an equally pressing point is made by those who point to the technological advances driven by urbanization—such as the productive power of factory farming, genetically modified organisms (GMOs), and other large and non-local agricultural techniques––to significantly relieve poverty and suffering. We can either farm and live like an idealized vision of a pre-industrial hamlet town, or we can get our food from a Star Trek-like replicator.
As is so often the case with twenty-first-century debates, Adam Smith has a lot to contribute to this conversation. The first several chapters of Book Three of the Wealth of Nations remind us that Smith is often a voice of moderation and calm well worth bringing into a heated debate.
From the beginning of the discussion, as is unsurprising in a writer who crystallized for so many the importance of the division of labor, Smith points to the ways in which the country and the city are dependent upon each other and the ways in which this dependence increases their productivity, wealth, and effectiveness. He writes:

More briefly,trade between the city and the country is made of win.
That said, Smith believes strongly that most humans would strongly prefer to “employ their capitals rather in the improvement and cultivation of land than either in manufactures or foreign trade.” Keeping one’s capital in land, he argues, keeps it “more under [one’s] view and command.” Additionally, “the beauty of the country besides, the pleasures of a country life, the tranquillity of mind which it promises, and wherever the injustice of human laws does not disturb it, the independency which it really affords, have charms that more or less attract everybody.”
Despite the pull of country life for our natural inclinations, Smith is certain that “the progress of opulence” is an even stronger pull for our choices. The city is the place where people can “have a much wider range, and may draw [their subsistence] from the most remote corners of the world, either in exchange for the manufactured produce of their own industry, or by performing the office of carriers between distant countries, and exchanging the produce of one for that of another. A city might in this manner grow up to great wealth and splendor, while not only the country in its neighborhood, but all those to which is traded, were in poverty and wretchedness.” The city means growth, and potential, and innovation, and creative drive. Equally, Smith notes, the inhabitants of cities “arrived at liberty and independency much earlier than the occupiers of land in the country.”
The cycle of trade between the country and the city and the cycle of improvement and progress between them are echoed in the population that cycles between them as well. As the pursuit of “the progress of opulence” pulls more and more people to the cities, the longing for the country life that has been left behind increases and pulls us back. Adam Smith understood this as well. He writes that, “Hunting and fishing, the most important employments of mankind in the rude state of society, become in its advanced state their most agreeable amusements, and they pursue for pleasure what they once followed from necessity. In the advanced state of society, therefore, they are all very poor people who follow as a trade, what other people pursue as a pastime.” As society becomes more complex and the division of labor becomes more precise and sophisticated, the old survival skills––like hunting and fishing and gardening and raising chickens in the backyard––become, increasingly often, hobbies that rich people engage in on the weekends. That allows us to romanticize these former occupations and forget that when engaged in for mortal stakes, they are not as much fun. It is this endless cycling and recycling that allows the country and the city to continue to gain from each other, learn from each other, and challenge each other.
Questions for Discussion:

The city seems to be winning as the "best" place to live if we look at numbers (and I am including suburbs as part of cities). As of the most recent Census, something like 3/4ths of Americans live in an urban area. Revealed preferences suggest that people like the convenience of urban living over the rusticness of the country.

I think that while it is easy to note the economic advantages of city life, it is difficult (but important) at times to empathize with those who have a genuine preference for a country lifestyle. Although being in a well-off position in society allows us to engage in activities for leisure like fishing, there are many fishermen who weigh the cost/benefits and decide to stay out on their boats. Even with all of the associated difficulties. And for these people, the rapid growth of cities might mean the loss of not only their jobs but also their livelihoods, as well as creates an inability to pass on the virtues and traditions they grew up with to their children. Children who will in many cases swept away into cities for the opportunities they can find there. These opportunities are positive in many regards, but there is a certain sadness present with the loss of a particular way of life, that even if we cannot understand it, we ought to keep in mind throughout these conversations.

I think we like to live in cities and towns, but are desperate to keep in a kind of nostalgic touch with rural life. This is, after all, the season of hay rides, bonfires, and apple picking. We (most of us) don’t want to have to do it for survival any more—but for Instagram?! Bring it.

It’s really fascinating how romantic we make the rural lifestyle. Certainly hayrides and apple picking, but also an association with the virtues people who live that life hold. Working hard from dawn to dusk, not taking anything for granted, caring for your friends and your family, living off the land. It sounds lovely, but is also heavily idealized.