Beauty and Language in Adam Smith

The 18th century is generally cited as the birthplace of modern aesthetic thought. Whatever the veracity of this claim, there is little doubt that aesthetic topics were central to the intellectual projects of Enlightenment in a way that was unprecedented in the immediately preceding centuries. Philosophers and critics writing during this period addressed themselves to a variety of aesthetic questions: What is the nature of taste? How are aesthetic judgments made and what justifies such judgments? What is the nature of the beautiful and how does it relate to other aesthetic qualities, such as the sublime or the picturesque? What is the nature of artistic representation and how does it relate to the beauty of the natural world?

Adam Smith is no exception to this trend. Although he produced no systematic treatise on aesthetics (or “criticism” as it was called among Eighteenth century Brits), Smith touches on these issues at a number of places in his work. In the following series of blog posts, I want to examine some of Smith’s most insightful and interesting comments on aesthetic topics. 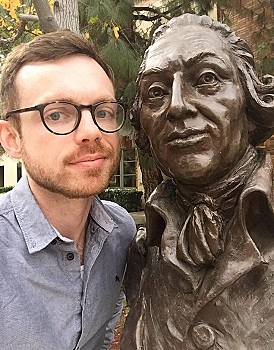 In this first post, I want to look at one of Smith’s earliest extant statements on aesthetic topics, his Lectures on Rhetoric and Belles Lettres, delivered in 1762-3 and now available to us through student notes. Smith’s main concern in these lectures is with effective communication through the use of language. In the course of exploring this topic, Smith draws on a wide range of historical and literary examples in order to present an intriguing account of the sources of beauty in language.


According to Smith, the beauty of a linguistic expression springs from two sources, “the sentiment and the method of expressing it being suitable to the passion.” (LRBL, v.57) Smith never expounds on what he means by saying that a sentiment can itself be beautiful, but this presumably has something to do with either the intrinsic pleasantness of the sentiment or with the sentiment being peculiarly suited to the state of affairs that inspired it.  The second cause of beauty is the suitableness of an expression for conveying the sentiment that it expresses. Smith refers to this as the propriety of the expression. Of the two sources, the second is the one that Smith puts the most emphasis on. However, it is only when the two are combined that “your Language has all the beauty it can have.” (LRBL, v.56)


Smith does not deny that some linguistic expressions may please us even when the sentiments they express are unpleasant. An especially apt expression of a painful emotion, for example, might please on account of its propriety. In this case, we might be pleased by the author’s ability to communicate his feelings with clarity and grace, despite the fact that the sentiment he is expressing is disagreeable. Here, as in all cases of language use, the propriety of the expression to the sentiment or idea that it expresses is the main source of its beauty.
Importantly, Smith does not include among the sources of beauty in language literary tropes or rhetorical figures. This flies in the face of a longstanding tradition in the theory of rhetoric. This tradition (which Smith identifies with canonical ancient figures like Cicero and Quintilian) held that the presence of well-executed tropes in a literary composition accounted for a major source of its beauty. Against this tradition, Smith maintains that tropes and figures of speech “give no beauty of their own.” Instead, these literary devices “only are agreeable and beautiful when they suit the sentiment and express in the neatest manner the way in which the speaker is affected.” (LRBL, i.73) The use of figures and tropes is only a “secondary means” for conveying the sentiments or ideas of speakers in the clearest and most perspicuous way possible. (LRBL, v.58) Whenever the use of rhetorical figures inhibits the clear expression of ideas or feelings, then these figures, far from enhancing the beauty of the composition, serve merely to deform it.


This account makes it clear that, for Smith, language is used first and foremost as a medium for effective communication. Anything that inhibits this aim serves to deform a composition. Smith’s main lesson for us is that, in attempting to communicate our thoughts and feelings in words, we should aim to write with clarity and perspicuity, while avoiding excessive ornamentation or rhetorical flourishes. It is only by approaching writing in this way, and not by weighting our prose down with complicated tropes or learned references, that we can achieve the highest beauty possible in our use of language.

Some possible questions for discussion:

The last point here fits with something Smith says about dress. Critical of the corset, he recommends to women "the beautiful roundness of their natural shape" (TMS, 199). Smith must think the corset points to "excessive ornamentation." Given the importance of adornment and complex systems to Smith's economics, the matter is delicate: Aren't tropes and rhetorical figures akin to the "operose machines" of the powerful and rich, which bewitch, stir ambition, and therewith, drive the economy?

There's definitely a beauty to truth in Smith's works, but there's also something pleasing about well-formed systems, "elegant contrivances", and the "operose machines" Graham mentions. We might have to pair it with the fear Smith believes we all feel at being "found out" in our deception—Smith might dislike corsets for the same reason he dislikes "painted faces" (makeup) and believe that a woman in a corset who is complimented on her figure should feel shame rather than pleasure in response—to see why we ought to strive for both truth and persuasiveness.

It makes me wonder what Smith would say about the state of our discourse today. I can't imagine he'd be impressed, but I wonder if he'd suggest useful correctives.

Thanks so much for your responses.

Graham, I love the links you draw between this material and Smith's account of fashion (a topic that is virtually ignored by contemporary aestheticians, but which loomed large in 18th c discourses about taste) as well as his political economy. I think Smith's contributions to the 18th c. luxury debates are key here. One disanalogy between these subjects that occurs to me is that, whereas extravagant clothing and dazzling consumer goods of various sorts may stimulate the desires that fuel economic growth, highly ornamented prose doesn't obviously produce the same effects (although it may bewitch readers in other ways).

Janet, you hit on an extremely important topic in your comment, which is the role that beauty--along with related emotions like wonder and surprise--plays in Smith's epistemology. Smith makes it clear in TMS that elegant and well-contrived systems, including systematic philosophical and scientific theories, stir aesthetic emotions in percipient that recommend them to our attention. Of course, he warns us that this process that can have its pathological manifestations, some leading us *away* from truth and causing us to neglect the real human suffering caused by our beautiful systems. The "History of Astronomy" might be a key text for understanding the complex ways that truth and beauty interact in Smith's thought.