People simply don’t respond to data the way they do to drama. Adam Smith—economist and professor of rhetoric—was ideally equipped to understand and explain why. 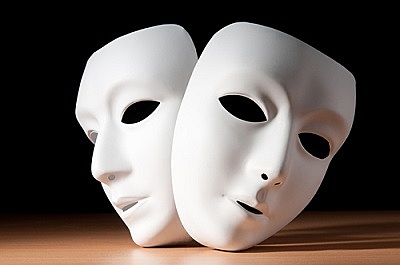 Many of the academics I know lament that the work that they do, which presents such clear arguments and evidence for ways to increase human flourishing, seems to pale in comparison to the emotional appeal of a film, a novel, or a television show that takes on the same subject. Why can’t people see that Schumpeter’s discussion of creative destruction is far more sensible than the anti-business arguments in films like You’ve Got Mail? Why does it take a show like The Wire to awaken people to the horrors of the drug war or a failing public school system, when the data about their effects has been available for so long?
Adam Smith’s exploration comes in the 13th lecture in Lectures on Rhetoric and Belles Lettres, which comes to us in the form of notes taken by his students. Here, Smith explains two different ways to describe objects—the direct and the indirect method.

That way of expressing any quality of an object which does it by describing the several parts that constitute the quality we want to express, may be called the direct method. When, again, we do it by describing the effects this quality produces on those who behold it, may be called the indirect method. This latter in most cases is by far the best. We see accordingly Shakespeare’s descriptions are greatly more animated than those of Spenser. Shakespeare, as he wrote in Dialogues had it always in his power to make the persons of the Dialogue relate the effects any object had upon them.

Betrayal is the sense of being harmed by the intentional actions or omissions of a trusted person. The most common forms of betrayal are harmful disclosures of confidential information, disloyalty, infidelity, dishonesty. They can be traumatic and cause considerable distress. The effects of betrayal include shock, loss and grief, morbid pre-occupation, damaged self-esteem, self-doubting, anger. Not infrequently they produce life-altering changes.

Here is Shakespeare, giving voice to Caliban’s sense of betrayal in The Tempest:

When thou camest first,
Thou strokedst me and madest much of me, wouldst give me
Water with berries in't, and teach me how
To name the bigger light, and how the less,
That burn by day and night: and then I loved thee
And show'd thee all the qualities o' the isle,
The fresh springs, brine-pits, barren place and fertile:
Cursed be I that did so! All the charms
Of Sycorax, toads, beetles, bats, light on you!
For I am all the subjects that you have,
Which first was mine own king: and here you sty me
In this hard rock, whiles you do keep from me
The rest o' the island.

Describing the same reactions to betrayal as described in the medical discussion, Shakespeare’s speech for Caliban approaches that description completely differently. He does not tell us that Caliban feels betrayed. He shows us the impact of betrayal on Caliban’s feelings.
Showing, not telling. Describing indirectly, not directly. These techniques give the audience a place to practice the skill of sympathy, as Smith explains in a more thorough working out of this same idea in Theory of Moral Sentiments. “Our joy for the deliverance of those heroes of tragedy or romance who interest us is as sincere as our grief for their distress, and our fellow-feeling with their misery is not more real than that with their happiness. ..In every passion of which the mind of man is susceptible, the emotions of the by-stander always correspond to what, by bringing the case home to himself, he imagines should be the sentiments of the sufferer.”
But just because something has the power to affect our emotions doesn’t mean that it is right or that it is good. We should remember that while art can open us to the emotional truths that are poorly communicated by data, it can also make us sympathize with and cheer for characters like Tony Soprano and Frank Underwood.  It can persuade us that bad political ideas are good ones, the terrible economic decisions are just common sense, and that it can, as Julian Barnes wrote, “turn bad love—selfish, shitty love—into good love poetry.”
That’s why it’s so important to study rhetoric and belles lettres, especially if you can take Adam Smith as your professor. If the way that someone describes a thing—directly or indirectly—changes the way we react to it, we need to know it. And that’s not so we can take the romance out of politics or the emotion out of economics. It’s so that we can give each their proper weight when we consider the world around us.

Maybe someone can help me out here. I'm thinking about the fact that what can make data so much more effective (and the same goes for false information) is giving it a narrative. This helps us fit data (or any belief) into an internal mental model—Smith might say a kind of system that we develop to explain the world. One reason that facts _can_ change minds is that they can fail, repeatedly, to fit with our model. So long as we collide with and don't avoid such stubborn facts, we'll be motivated to find a new story that can accommodate them. (Of course, this story doesn't *have* to be true.)

A coherent narrative seems related to, but different from sympathy. But I can't articulate the connection. Does anyone want to give it a shot?

I think that creating a coherent (and persuasive) narrative requires sympathy, because it requires imagining things that are happening in another person's head--both in the story and in the reader/hearer of the narrative. That, as many have argued (including Smith, though I can't find the spot at the moment) is the basis of trade--the ability to imagine how something we don't want might benefit someone else. And Bart Wilson argues (in a forthcoming book) that this kind of imaginative ability to get into other people's heads is also the basis for the human understanding of understanding of property.

You have to know what humans are *like* in order to write a narrative (factual or fictional) that feels real to them. That takes sympathy. We watch kids learn to do it all the time, and we judge the worth of films and novels and so on on their "realism" all the time--even if they're superhero movies.

This is why I think it's really useful when, say, Pete Leeson does things like look at trials by ordeal or wife sales and says, "These seem completely insane, and yet the people who engaged in them were human, like we are, so let's think about the reasons they had for doing so. What's the narrative that makes sense for why *they* thought trials by ordeal or wife sales were sensible?"

It's what's lurking behind Maude Pember Reeves's "Round About A Pound A Week" as well--the question not only of "How do London's working poor spend their money?" but also "WHY do they spend their money as they do?"

But even if we are quite skilled at that, I think it's interesting that sometimes even though we can mimic narratives that compel others, we have a hard time seeing why they're compelling. You just have to kind of tell yourself that it compels other people, almost like a matter of taste (or, to hark back to the last salon, love) that you don't share. Knowing how to do that might help us be more persuasive, but it doesn't necessarily help us to be sympathetic. (Though surely it must get us closer.)

Right! This is one reason that other people's reading or musical tastes can be so baffling. My husband loves Steely Dan. Their music makes my teeth itch. That's the subjective value part of this.

But you can say (as the philosopher Loren Lomasky does) "That person loves a thing that I do not understand. I love things that person doesn't understand. We both love things, and this is what makes us human." So that ability to be compelled by things--even if they are very different things--might lie at the root of sympathy. Maybe?

And I imagine it's all the harder when one is worried about being factually correct as well as compelling and persuasive.

Fascinating article. I went back and re-read Lecture 13 after reading this. Somehow, I didn't see the connection to TMS before, but now it's really brilliant.

I think this insight also helps me understand more some of Smith's exceptions to liberty discussed in Wealth of Nations, in particular, certain trade restrictions, usury, and banking restrictions. To your question #3 above, these discussions are, largely, devoid of emotion. They're put forth extremely matter-of-factly where conditions necessary are laid out, but there is no emotional appeal. The discussions are very dry and formulaic: "Liberty Principle is a presumption. X might be an exception given Y." End of story. Compare that to the fist-pounding he does on, say, slavery in TMS (281-283) or the balance of trade in WN (488.2 or 456-457).

He might abandon emotion in these areas for purely practical reasons. As he writes in Wealth of Nations, the exceptions to the liberty principle belong to the science of a legislator and not to those guided by whim (WN 468.39). That these exceptions themselves are cold and logical might be why he abandons emotions in favor of logic on these very serious topics.

Jon, I think that's really interesting, especially that you include usury in the list of topics that don't (for Smith) require an emotion laden appeal. That's a huge change from the approach to usury in the Middle Ages. And even in the Renaissance/Reformation where (I argue) thinking on usury is rapidly changing, it's still a very emotional topic.