Educating for Character at Home: Adam Smith and John and Abigail Adams 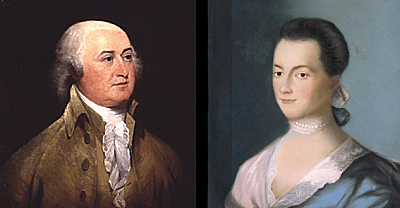 As difficult as our current circumstances are, we can teach our children the importance of being good citizens attuned to the needs of others during these troubled times.
The school closures that have been ordered in hopes of containing the COVID19 pandemic mean that we are now facing a world in which education will be happening in the home and among the family--at least for the short term. Interestingly, if one looks at Adam Smith and the work of two prominent 18th century Americans, John and Abigail Adams, we see a shared emphasis on the important role that families play in educating children to become responsible citizens and morally upstanding people.


Even though he has long been mischaracterized as a hard core individualist, Smith was a great believer in the importance of community and social relations. In Part VI, section II of TMS Smith turns his attention to the family and how it helps to shape a character consistent with the goal of respect and care for others. Smith writes that family members “are naturally the objects of his warmest affections. They are naturally and usually the persons upon whose happiness or misery his conduct must have the greatest influence.” (219). Smith argues that our earliest friendships are with siblings and give us the greatest satisfaction or most profound pain. We learn to be social beings through the family for Smith.


As we all sit in our homes today many of us are surrounded by children who are trying to learn in adverse circumstances. But Smith sees a distinct upside to this situation. He notes that many children of elite British families were sent abroad for their education. While the quality of the instruction may have been quite high, Smith worried about the impact this foreign separation would have on character formation and social learning. He notes that when absent brothers and sons return they are welcomed back as favorites because they have been missed. However, Smith points out a serious problem with the return of children educated abroad - they have lost the aptitude and practice in maintaining what Smith calls “easy accomodation”-- the natural conversations and exchanges among brothers and sisters, mothers and fathers, husbands and wives.

The education of boys at distant great schools, of young men at distant colleges, of young ladies in distant nunneries and boarding-schools, seems, in the higher ranks of life, to have hurt most essentially the domestic morals, and consequently the domestic happiness, both of France and England. Do you wish to educate your children to be dutiful to their parents, to be kind and affectionate to their brothers and sisters? put them under the necessity of being dutiful children, of being kind and affectionate brothers and sisters: educate them in your own house (TMS, VI.ii.1.10).

John and Abigail Adams shared Smith’s view that the family was an important element in developing civil society, but they valued not easy accommodation, but instead an ancient conception of civic virtue. The most striking thing one sees in reading their correspondence was their concern with living lives consistent with ancient values and virtues.


When John Adams was in Amsterdam, a city obsessed with thrift, commerce, and trade, Adams argued that while focusing on every penny was a “just Maxim in general,” he also “would never wish that to see a Son of Mine govern himself by it.” The reason for this rejection of penny pinching was that Adams did not believe that personal enrichment was consistent with what he believed was the proper goal for his children––supporting independence. Indeed, in a letter sent from Amsterdam to his son, John Adams admonished him to focus on Cicero, Tacitus, and Levy. Those authors, Adams hoped, would teach his oldest son “Wisdom and Virtue.” The purpose of Quincy Adams’s education was, according to his father, “to make you a good Man and a useful Citizen.”


In a letter to John Quincy during a later trip while he was accompanying his father to France, Abigail implored her son to act with grace and honor. She wrote, undoubtedly stealing from a Spartan myth, “for dear as you are to me, I had much rather you should have found your Grave in the ocean you have crossed, or any untimely death crop you in your Infant years, rather than see you an immoral profligate or a Graceless child.”


Abigail sent a letter to her daughter the following year explaining a story of John’s encounter with a French noblewoman. John explained that he would sacrifice everything, apparently including his family, for the good of his country. Abigail rather casually wrote that “she tells him that the sentiment is worthy of a Roman and a member of Congress, but cannot believe he would sacrifice his wife and children. In reply he tells her that I possessed the same sentiment.”


In a letter to his wife in 1778 from France, Adams expressed similar sentiments about the state of the French court. About the French he says, “no People in the World, who take so much Pains to please, nor any whose Endeavours in this Way have more success. Their Arts, Manners, Taste and Language are more respected in Europe than those of any other Nation.” But this did not predispose him towards the French aristocracy. To the contrary, Adams wished he could “forever banish and exclude from America, all Gold, silver, precious stones, Alabaster, Marble, Silk, Velvet and Lace,” in order to prevent what he perceived to be the horrible and corrupting influence of luxury.


This focus on the civic virtue of citizenship rather than the pursuit of material happiness was an obsession for Adams. And rather than try to combine ancient virtue with modern commerce, he starkly contrasted the two. In a letter to his daughter, for whom he could never have envisioned an active political career, the advice was the same as it was for his oldest son. “If you have not yet so exalted sentiments of the public good as have others more advanced in life, you must endeavour to obtain them.” It was only through pursuit of a life of advancing the public good that she could find happiness, not through a pursuit of material goods. He wrote to her: “But depend upon it, it is simplicity, not refinement nor elegance [that] can obtain it [happiness].”


As difficult as our current circumstances are, we can teach our children the importance of being good citizens attuned to the needs of others during these troubled times.  Adam Smith and John and Abigail Adams understood that liberty and the protection of civil society sometimes involve making individual sacrifices.  But if we and our children can take steps towards improving the state of “easy accomodation” and see this time as a way to help other members of our community who are at risk we may emerge from this with more close- knit families and well-bonded communities.

G. Patrick Lynch is a Senior Fellow at Liberty Fund. He is currently working on a book length manuscript focusing on the "state of nature" in political theory.