Farming in the time of Coronavirus: Do I CARE Anymore? 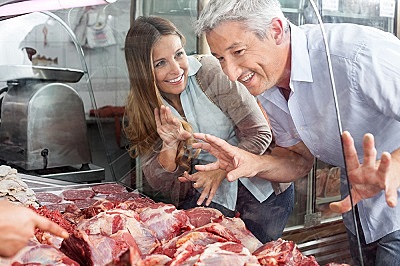 The taxman shadows the showman, and it is the humble, the middling, the sweating, worrying, mincing business owner and his working clientele that will pay for such comfort.
Two trillion dollars. The staggering scale of the Covid-19 CARES Act has not, can not quite sink in. The federal bill intended, ostensibly, to cushion the impact of a mandated economic shutdown is so vast, sweeping, and riven with partisan morsels that it’s impossible to fully comprehend. What isn’t so hard to comprehend is that it will, it must, be paid for, and that the bill will be written on a tax form.
As a member of the “essential” economy, engaged in the “food, beverage, or agriculture” sectors, I’m frankly confused. Taxes had practically crushed me out of business before this crisis and I had put my ranch up for sale. Now we’re suddenly swamped with demand, working double-time to help desperate people keep meat on the table. Then, as if to emphasize the cosmic joke, the Small Business Administration, in its effort to shovel mountains of imaginary cash into the “economy,” tells me that my business is ineligible for the vaunted CARES funds anyway. Eligible applicants are those who are “…not an agricultural enterprise (e.g., farm), other than an aquaculture enterprise, agricultural cooperative, or nursery.” I see…
The New York Times tells the rest of us: “It’s OK: You can stop trying to be productive. A great thing to do right now, if you are able to, is stay inside and do nothing.” I’ll try to remember that, as we bust ourselves working overtime, risking our employees’ health to keep people fed, while a major portion of the country takes a taxpayer-paid Netflix timeout. That would be irksome enough even without the certain knowledge that when this all blows over, it is poor fools like us who will be paying the piper. We are the ones who will be taxed when the butcher’s bill needs paying. Today’s meme du jour says it best (as memes so often do): bold words over Bruce Willis’s skeptical scowl-- “The essential employees don’t want to pay taxes again. Ever.”
----
Adam Smith dwells at some length on taxes in The Wealth of Nations, noting their subtle, often counterintuitive effects on the motivations and incentives of individuals. He begins by noting how crucial trust is between the tax-assessing authorities and those being taxed:

“The people of Hamburg pay their taxes with great honesty. This is a small republic and the people have complete confidence in their own public authorities. They are not only convinced of the necessity of the tax for the support of the state but also believe it does actually go to that purpose.” (WoN, 491) I don’t presume to speak for others, but “confidence in their own public authorities” does not seem to be part of the general zeitgeist from where I sit. Millions (or was it billions?) in pork-barrel favoritism such as the Kennedy Center funding debacle merely affirm for us peasants the suspicion that pre-ordained winners and losers are being hand-picked by elite insiders. We’re used to that feeling on Wall Street, but at least there it’s (mostly) the elites’ own money. This time it is ours.

Particularly relevant today is the moment when Smith addresses national “emergencies.” In Holland during Smith’s time, “…after the revolution bringing the late Prince of Orange to the stadholdership, the Dutch government imposed an emergency tax of 2% on the wealth of every citizen. All citizens assessed themselves and paid their taxes in the same way as at Hamburg. They paid with great honesty. However, the people had the greatest affection for their new government. They also knew they would have to pay only the tax once: to relieve the state in a special emergency.” (WoN, 492) Would that we could do the same!
My business has struggled for years to make a humble go of an agricultural enterprise. Nobody much cared when we lay awake at night wondering how we would get paychecks sent, nobody noticed our dipping into life savings to keep the electric bills paid, no federal entity was interested if we could pay our taxes on time (save one…). But now, when pestilence looms and most businesses are forced to feel the chill we’ve felt for years, the glad-handing clerisy comes--offering the warm comfort that “the government” will bear our burden. The taxman shadows the showman, and it is the humble, the middling, the sweating, worrying, mincing business owner and his working clientele that will pay for such comfort.
Perhaps I’m wrong. I recognize the dangerous symptoms of self-righteous indignation, and maybe I’m just sore at being excluded from those two trillion dollars. Maybe I secretly wish I could have been a first-mover in the biggest Tragedy of the Commons this country has ever seen. Maybe, more likely, my ire is at my own weak temptation to succumb to this massive wealth transfer—of my cowardly impulse to join the stampede on the lifeboats while the ship goes under. Maybe I’m just tired.
But I sense something dark slithering in the belly of those who are still working in the time of Coronavirus. In France three centuries ago, Smith tells us that farmers “…often deliberately reduce output and impoverish themselves fearing having to pay too much tax. That miserable strategy is not always in their best interest. They might lose more by reducing production that they save by reducing the tax. However, this has been the effect of this wretched tax regime.” I couldn’t agree more. Sometimes a people’s sense of justice is stronger than their sense of self-interest. The CARES Act has done much to erode my “confidence in the public authorities” and I doubt if I’m alone. The next few months will crucially decide how, or if, that confidence will be regained.