Money and Virtue in the Ancient World 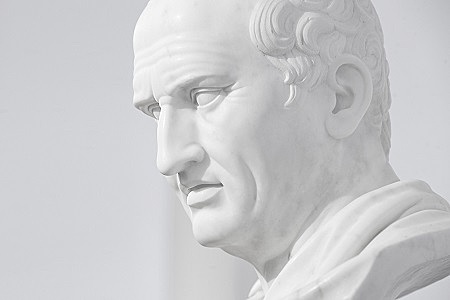 It is never a bad idea to remind students of economics that, long before Smith’s Wealth of Nations gave birth to modern economics, complex and vivid discussion of economics were already happening. They have been happening, I am certain, for as long as humans have trucked, bartered, and exchanged. Two excellent reminders of the length and complexity of the human interest in economic matters are the summary of Stoic ethics by Aurius Didymus, from the first century BCE, and Cicero’s De Officiis (44 BCE).


Didymus explores this more thoroughly at another point in the text when he tries to understand how the Stoics can say that “all good things belong in common to the virtuous.” He argues, first, that all virtuous men are in concord about how things ought to be done, and therefore the choices they make are the same. Then he argues:


There is another sense in which all good things are common. For they believe that anyone who benefits anyone, by that very fact, receives equal benefit, but that no base man either benefits or is benefitted. For benefitting is to change or maintain something in accordance with virtue and being benefitted is to be changed in accordance with virtue. …They say that only the virtuous man is a household economist and a good household economist and again a money-maker. For household economy is a condition which contemplates and practices what is advantageous to a household; and economy is an arranging of expenditures and tasks and a care of possessions and for the work that is done on the farm. And money-making is experience of acquiring money by means of the actions by which one should do so, and a condition which causes one of behave ‘in agreement’ in the collection and preservation and expenditure of money with the aim of achieving prosperity. And some think that money-making is an intermediate activity, others that it is virtuous, and no base man is a good guardian of a household, nor can he arrange it that a house is well run. And only the virtuous man is a money-maker, since he knows the sources from which one is to get money and when and how and up to what point one should continue doing so.


Although it is doubtful how well this clarifies the question of how things are or are not held in common, it does clarify one thing of enormous interest to readers of Smith. Money-making is not a bar to virtue. In fact, it is only possible for the virtuous, because the wisdom necessary to make the decisions that are necessary in order to make money is only available to the virtuous.


In much the same way that Didymus cordons off illegal activity from the praiseworthy activity of “money-making,” Cicero, in De Officiis notes that exploitation of others is unacceptable:


Now then: for one man to take something from another and to increase his own advantage at the cost of another’s disadvantage is more contrary to nature than death, than poverty, than pain and than anything else…if each one of us were to snatch for himself the advantages that other men have and take what he could for his own profit, then necessarily fellowship and community among men would be over thrown.


Money-making and profit are fine, but they must be pursued in ways that do not violate other virtues. Cicero then works through two hypothetical “case studies” of moments where a virtuous man would need to think carefully through a decision about profit and money-making. The first of these is a discussion about corn trading:


Suppose that a good man had brought a large quantity of corn from Alexandria to Rhodes at a time when corn was extremely expensive among the Rhodians because of shortage and famine. If he also knew that several more merchants had set sail from Alexandria, and had seen their boats en route laden with corn and heading for Rhodes, would he tell the Rhodians? Or would he keep silent and sell his own produce at as high a price as possible?


Cicero then follows this hypothetical case with examples of ways in which various philosophers would respond to the situation––which serves to show that even wise and virtuous people may find reasons for debate here, and which suggests that economic decision-making can be sophisticated and difficult. To emphasize this, Cicero suggests a second hypothetical case study, as follows:


Suppose that a good man is selling his house because of certain faults that he knows and that others do not know, say that it is unsanitary but thought to be salubrious, or that it is not generally known that vermin can be found in all the bedrooms, or that it is structurally unsound and crumbling, but no one except the owner knows this. My question is this: if the seller does not tell buyers these things but sells the house at a higher price than that at which he thought he would sell it, will he not have acted unjustly or dishonestly?


Our view of economic thinking in the ancient world tends, understandably, to be largely dominated by Aristotle and his very negative attitude towards money and interest.[i] While he is a towering figure, the Stoics and Cicero may offer another view of market transactions that will allow us to deepen and enrich our vision of ways in which the classical world thought about money. Certainly, seeing money-making listed as a virtuous activity and seeing complex theoretical debates over the ethics of asymmetric information are aspects of classical thinking about economics that may come as a surprise to many.

[i] “There are two sorts of wealth-getting, as I have said; one is a part of household management, the other is retail trade: the former necessary and honorable, while that which consists in exchange is justly censured; for it is unnatural, and a mode by which men gain from one another. The most hated sort, and with the greatest reason, is usury, which makes a gain out of money itself, and not from the natural object of it. For money was intended to be used in exchange, but not to increase at interest. And this term interest, which means the birth of money from money, is applied to the breeding of money because the offspring resembles the parent. Wherefore of any modes of getting wealth this is the most unnatural.” Aristotle, Politics, Book One, part 10.