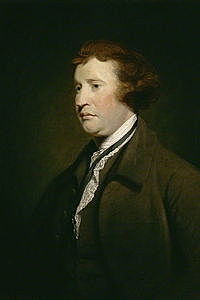 It’s unlikely that Burke imagined, when sneering at “economists” in his Reflections, that his defense of feudal hierarchy would later serve as the foundation for a bloody rebellion aimed at perpetuating chattel slavery.
We’re so used to the word “economics” that it’s easy to forget that it was new in Adam Smith’s age. In fact, he was among the first generation of scholars who employed this new approach to the study of production and trade—by which I mean an effort to understand the production and distribution of wealth with the same kind of secular analysis that Isaac Newton had used in studying physics. Smith’s techniques—which came to be called “political economy,” and only later “classical economics,” represented the application of reason to the social sciences, which would later be considered characteristic of the Enlightenment.


Yet while the Enlightenment produced immense benefits, it also provoked a reaction from those who considered its rational techniques dehumanizing. To these critics, the emphasis on rational explanation seemed denigrating to broader spiritual values—values that lacked a rational foundation but which were nonetheless essential.


Among the earliest and most influential of these critics was Edmund Burke, whose Reflections on the Revolution in France (1790) put him at the forefront of a trend of anti-Enlightenment intellectuals who viewed political economy as perilous, and who ultimately produced some of the most prominent defenses of oppression in western thought.


Burke’s Reflections went beyond condemning the French Revolution’s violence. Its primary focus was on what Burke saw as the Revolution’s philosophical essence: the effort to apply “light and reason” to questions of political philosophy. This, he warned, would result in the overthrow of traditional and religious hierarchies, resulting in the vulgarization of politics and the demolishing of the “sentiments” which he valued above all else. To Burke, government was a system of “pleasing illusions” which made “submission…obedience…subordination…[and] servitude” agreeable. Political economy threatened to “rudely [tear] off” the “decent drapery” that helped conceal the fact that government was really a system of hierarchical power and privilege. In other words, Burke believed government was a form of stage magic that could not survive the rational examination demanded by Smithian economics.


It should be emphasized that Burke was conceding that the class structure of his age was irrational, and that it did, in fact, consist of arbitrary “power,” “obedience,” and “loyalty to rank.” His concern was not with making society more just, or expanding people’s ability to pursue happiness; rather, he was concerned with preserving the mystique of politics—the devices by which the state’s hierarchical inequalities were euphemized.


That was why, in a most revealing passage, Burke bemoaned what he called “the age” of “sophisters, economists, and calculators.” Burke’s use of the word “economists” here was admirably precise. He was opposed, not to any of Smith’s particular opinions, but to economics as such, because it was contrary to what he viewed as the fundamental quality of good government: its power to bamboozle. Enlightenment reason, he feared, would “explode” the “superadded ideas, furnished from the wardrobe of a moral imagination, which the heart owns and the understanding ratifies, as necessary to cover the defects of our naked, shivering nature.” Thomas Paine’s famous riposte from Rights of Man—that Burke “pities the plumage, but forgets the dying bird”—was apt: Burke’s concern for “drapery” and “superadded ideas” came at the expense of any anxiety for the people who actually experienced the “obedience” and “servitude” he praised.


Burke’s critique of economics was just the first of what became a regular theme among anti-Enlightenment thinkers. As the French Revolution transformed into a worldwide catastrophe with the rise of Napoleon, the anti-Enlightenment movement coalesced into the Holy Alliance—the group of monarchies who not only resisted Napoleon’s military, but also pledged to defend established Christianity and divine right. Its intellectual supporters fashioned a communitarian theory that rejected “political economy” and sought instead to justify social institutions in terms of tradition, sentiment, and religious sanction. In the United States, this would lay the foundation for the argument in favor of slavery—which became the first anti-capitalist ideology.


America’s founders had considered slavery a “necessary evil” at best, and, at worst, a shameful violation of Enlightenment principles. Smith himself had deplored it as unjust and inefficient. (WON II.7) Yet they also thought it would wither away without the need for radical political change. Unfortunately, the change turned out to be in the opposite direction. Beginning in the 1830s, reactionary intellectuals began promoting slavery as a “positive good.” Building on arguments first formulated by Holy Alliance intellectuals, thinkers such as John C. Calhoun, James Hammond, Henry Hughes, and George Fitzhugh claimed that anti-slavery beliefs represented a cold, inhuman rationalism that gave short shrift to sentiment and hierarchy. Together, they built the world’s first consciously anti-capitalist ideology—which they called “sociology.”


The pro-slavery argument held that the liberal society of free economic exchange caused alienation, because it viewed human beings as mere individuals engaged in rational calculation. In other words, Smithian economics was premised on selfishness. This is what led British writer Thomas Carlyle to label economics “the dismal science” in an 1853 speech against anti-slavery activists. Economics was “dismal” because it “finds the secret of this Universe in ‘supply and demand,’ and reduces the duty of human governors to that of letting men alone.” What was preferable was a society of stability, sentiment, “obedience,” and the “reveren[t]” “relation of master to servant and of superior to inferior.”


Like Carlyle, South Carolina’s James Hammond claimed in his 1845 Letters on Southern Slavery that the peculiar institution was more humane than free labor, because it represented the “sacred and natural system in which the laborer is under the personal control of a fellow being endowed with the sentiments and sympathies of humanity.” In northern states and Britain, this feudalism was being “superseded” by a “cold, stern, arithmetical” system called “Capital,” or the “modern artificial money-power system.” The free markets of Smithian economics, tainted throughout by the stain of Mammon, treated human beings as mere things. But the “Heaven-ordained system of servitude” treated slaves as “human beings…peacefully and happily linked in our social system.”


Mississippi’s Henry Hughes shared Hammond’s communitarianism but offered a more thorough defense of slavery in his Treatise on Sociology. Hughes used the term “sociology” as the opposite of “economics.” Under “the economic system,” production, exchange, and other forms of social intercourse are “free” and therefore “accidental,” because “order is not ordained and established” but is merely the consequence of countless individual choices. Since “distribution is not by the function of justice or the State,” and laborers are “not treasured,” the result is economic inefficiency and a sense of loneliness on the part of citizens. The slave society, by contrast—which he preferred to call the “warrant society,” because all individual rights in such a system were “warranted” by the state—was governed not by economics, but by sociology. The government ensured that all “order is public,” meaning that “production is orderly,” and—since “the distributor” of wealth is “the state”—that “want is eliminated.” The warrant system is “the perfection of society,” since it is consciously planned and organized to serve society’s needs. It was ludicrous to contend that slaves had no rights, Hughes concluded, because they actually “have substantially whatever is due to them,” as determined by society.


But it was Virginia’s George Fitzhugh who became the most emphatic champion of pro-slavery ideology, and the most forthright in denouncing the Smithian economics underlying abolitionist thought. Like Hughes, he contrasted the “free society” of capitalism—which was based on inhuman greed—with the slave society, which aimed to satisfy humanity’s need for belonging. The system of slavery, which he called “the very best form of socialism,”was based on the compassionate hierarchy—paternalism, in short—that Burke had advocated, whereas the free society was based on vulgar economic considerations of supply and demand.


“Adam Smith,” wrote Fitzhugh, “saw only that prosperous and progressive portion of society whom liberty or free competition benefitted,” and ignored the fate of the poor. But in Fitzhugh’s eyes, “the world wants good government, and plenty of it—not Liberty.” The “whole philosophy, moral and economical, of ‘The Wealth of Nations,’” he insisted, was “‘Every man for himself, and Devil take the hindmost.’” By contrast, sociology would emphasize not freedom but the “protective care-taking and supporting feature[s]” of the “glorious thing” that is slavery. In fact, slavery was so glorious that Fitzhugh believed it should be extended to other races as well.


Such frankness astounds modern readers, but these writers were quite serious. The sociology they offered as an alternative to economics was rooted in Burkean concerns with sentiment, hierarchy, and mystique. Its principles were virtually identical to those later advanced by communitarian anti-capitalist writers, who made similar arguments after the Civil War, not as a defense of chattel slavery but instead of the Progressive administrative state. As John Marini and others have observed, Progressives viewed regulatory bureaucracy as a new bulwark for class hierarchy: a mechanism whereby sociology could combat the individualism, alienation, and greed that pervaded a society governed by economics.


It’s unlikely that Burke imagined, when sneering at “economists” in his Reflections, that his defense of feudal hierarchy would later serve as the foundation for a bloody rebellion aimed at perpetuating chattel slavery. But in their formulation of pro-slavery ideology, the Confederacy’s intellectuals owed a profound debt to this enemy of economic thought.