by Shal Marriott for AdamSmithWorks 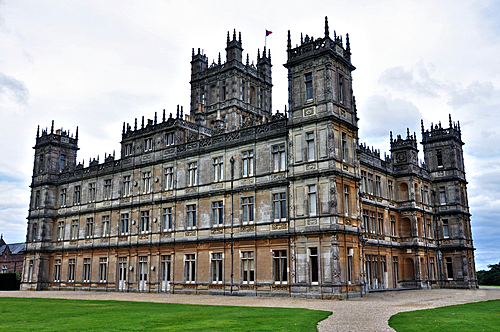 Imagine this: Two people from entirely different backgrounds and political perspectives, tolerating one another and engaging in a civil way. Not only that, but becoming friends. Although it seems to be increasingly difficult to picture, in the popular television series Downton Abbey we find just that. One particular relationship which highlights the ability of people who are of different social classes and world views to experience friendship and sympathy, is the relationship between Robert Crawley and Tom Branson, who are about as opposite as can be.


For those unfamiliar with the show, let me paint you a picture. Robert is a stubborn and unapologetic English Tory who believes in tradition and hierarchy. Tom is his chauffeur, a working-class Irish man who wants to fight against the rich and the oppressive English monarchy. There is a cliff-like social and class divide here. So how is it that these two people who are natural born adversaries and who want nothing to do with one another, come to develop a relationship?


It’s simple. They are forced to spend time together. Sybil (Roberts’ Daughter) falls in love with Tom, so Tom ends up attending all of her rather dreadful and drama filled family cocktail hours. Dreadful for them that is. For the viewer, these social occasions are quite a lot of fun. Tom is ridiculed, made fun of, drugged, questioned, and interrogated routinely. Yet he continues to show up and interact with Sybil’s father and her family, because of how much he cares for her and wants to support her.


Even after Sybil and Tom have a newborn daughter and he becomes (tentatively) one of the family, there is still much conflict. Tom and Robert argue over the christening of the child, where the young family should live, the lifestyle they should pursue. Even at the conclusion of the show, the conflict hasn’t ended! Yet something happens over the course of these hours and days and years – a fondness forms between Sybil’s Father and the chauffeur. It doesn’t seem to make any sense at all.


But to Adam Smith it would. Robert and Tom are trapped into conversing and spending time together. These simple interactions cause them to gradually get to know one another. The result is that they are more readily able to empathize with each other. That chance to learn empathy is crucial to how we understand people and our place in society, according to The Theory of Moral Sentiments.


Think of those who we are closest to: our families. Our connections to them are stronger than to our friends, and so is our ability to empathize with them. It’s more than mere biology, it’s social circumstance. As people are more and more distant from us, they are more and more difficult to relate to. As they come closer to us (in both physical and emotional distance) we can more readily enter into their passions and dispositions. Over time we learn how to relate to this new person in our social sphere, and attachments can subsequently form. Our ability to empathize with them becomes stronger, and we are more able to imagine ourselves in their shoes. This is exactly what happens with Robert and Tom.


It is through conversations, discussions, and arguments, that they finally come to care for one another. Eventually they even become business partners, recognizing each other (to some degree), as equals. This relationship is between the two of them, outside and independent of their relationships with Sybil, who initially forced them together.


Adam Smith’s best friend was David Hume, who spoke of how important it was to stay grounded in the world in ways unconnected to our professions. He wrote fondly of playing backgammon with his friends. The dinners and cocktails that Robert and Tom share provide much the same opportunity. Regardless of our values, our worldviews and opinions, even our social class, we can find things in common if we make the effort to spend time together--or if we feel obligated to, as in the case of Robert and Tom. We can relate even to those with whom we disagree the most, if given the opportunity and circumstance. Neither Robert nor Tom was forced to compromise his principles or integrity to get along. They retained their individuality, while developing and fostering the ability to relate. They were able to see one another as individuals, deserving of mutual respect and integrity. In turn, they grew as individuals and became better people for it.


Downton Abbey can give us a glimpse into how we can connect with one another better, despite the most substantial of differences. The idea of getting along with people is one Smith held dear. He wrote that:


...to feel much for others, and little for ourselves, that to restrain our selfish, and to indulge our benevolent, affections, constitutes the perfection of human nature; and can alone produce among mankind that harmony of sentiments and passions in which consists their whole grace and propriety.


Ultimately, by looking at the unusual and unlikely friendship of Robert Crawley and Tom Branson, we can exactly what Smith describes. And if we ourselves try harder to connect with those we initially perceive as being impossible to relate to, we may find ourselves in a world where everyone can feel a little more loved and lovely.


1. What other relationships in Downton Abbey and other popular culture can show us how we can get along with those from whom we are different?


2. What can Smith’s ideas show us about the importance of discourse for equality in our society? How does this relate to the importance of a commercial society contrasted with other types of economic systems?


3. Are there situations where our values and opinions are too diametrically opposed, where we are unable to develop a stronger empathy with a stranger?


4. Does social class still present the same barrier to empathy today as it did in the early 1900’s?

Nice essay, Shal, congratulations! As a fan of DA I can affirm your observations on how Robert and Tom's relationship evolved. I might add that Tom also helps to bring Robert out of feudalism when he (and Mary) convince Robert to start running Downton Abby according to modern business principles. I look forward to your next piece!

Thank you for reading! I think you're absolutely right. I also think that what the shift away from feudalism demonstrates, is that we are better able to change the minds of people once we are able to more strongly empathize with them. This can have positive impact not only for an individual, but for the society they are contributing to. The microcosm of the Downton estate is a great example of this.