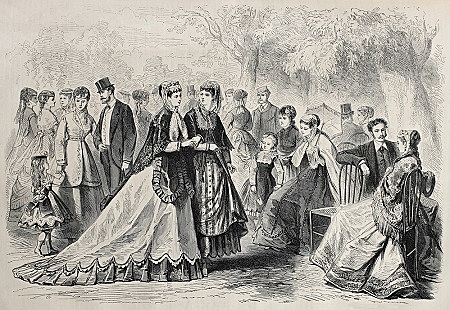 One of the most delightfully tortuous social gaffes in the series of etiquette errors that is the 1995 film adaptation of Jane Austen’s Pride and Prejudice is Sir William Lucas’s encounter with the Bingley sisters. Austen provides readers with a thorough description of Sir William in the opening of chapter five of the novel.

Sir William Lucas had been formerly in trade in Meryton, where he had made a tolerable fortune, and risen to the honour of knighthood by an address to the king during his mayoralty. The distinction had perhaps been felt too strongly. It had given him a disgust to his business, and to his residence in a small market town; and, in quitting them both, he had removed with his family to a house about a mile from Meryton, denominated from that period Lucas Lodge, where he could think with pleasure of his own importance, and, unshackled by business, occupy himself solely in being civil to all the world. For, though elated by his rank, it did not render him supercilious; on the contrary, he was all attention to everybody. By nature inoffensive, friendly, and obliging, his presentation at St. James's had made him courteous.


Sir William has been knighted at Court, and has spent some time mingling with other titled individuals. Unlike these others, however, his title is not one that can be inherited. Nor does it convey any dignities upon his children during his life. He is in the lowest rank of the nobility, and only there for his lifetime. His family has not been enobled.
Moving from town, naming his house after himself, becoming disgusted by his businesses, and spending his time graciously “being civil to all the world” is something of an over-reaction to a mere knighthood. (Notice Austen’s use of the word “courteous” to describe him. It can mean polite and gracious, but it can also mean possessing a slightly condescending sense of noblesse oblige.) I suspect both meanings are active here.) It Sir William’s over-reaction to his new social status, and its unpleasant social consequences, that are shown so painfully on screen when he meets the Bingley sisters.


Sir William intends merely to be kind (and perhaps to boast a little about his importance) by offering to use his social consequence in order to assist the Bingley sisters at court. By doing so, however, he insults their own social standing, implies they are his inferiors, and generally makes a cake of himself. The Bingleys, social climbers of the worst and most determined kind, respond with disdain.
If only Sir William had read a little Adam Smith before he accepted his knighthood! He would have learned in no uncertain terms that court is a place to be avoided.

Are you in earnest resolved never to barter your liberty for the lordly servitude of a court, but to live free, fearless, and independent? (Then…) (n)ever enter the place from whence so few have been able to return; never come within the circle of ambition; nor ever bring yourself into comparison with those masters of the earth who have already engrossed the attention of half mankind before you.


The halls of power and influence will infect anyone who enters them with a loss of freedom and independence, because to go to court is to enter into a system where nothing matters but rank and ambition, and where one is currently placed on the ladder. There is no real friendship there, merely talk of “Who loses and who wins; who’s in, who’s out” (Lear V.3.15.) Even to touch it briefly—for as long as it take to accept a knighthood, for example--is to be defiled by its ambitions and temptations.