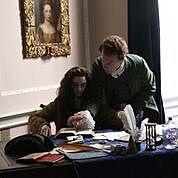 ...Smith was--as have been so many writers--both impressed by and wary of the power of good writing and rhetoric

I take a truly inordinate amount of pleasure in reminding economists that the father of modern economics began his professional career in 1748 as a lecturer on rhetoric. His lectures on rhetoric and belles lettres--delivered publicly in Edinburgh for at least 15 years after his return from studying at Oxford--were enormously popular. Smith rapidly gained a reputation as a smart and elegant lecturer with reliable aesthetic principles and a wide grasp of literature, and his Oxbridge accent was considered more desirable than a Scottish accent for young people to hear and to emulate.

While the manuscripts of Smith’s lectures were among the papers he had destroyed in the days leading up to his death, we can recapture some of the character of Smith’s lectures on rhetoric from the surviving notes of students who attended the lecture series. From them, we can see that Smith was--as have been so many writers--both impressed by and wary of the power of good writing and rhetoric

As has been the case for every teacher of rhetoric, Smith’s main goal for his students is to achieve clarity of expression. In lecture #6, he notes that:

When the sentiment of the speaker is expressed in a neat, clear, plain, and clever manner, and the passion or affection he is possessed of and intends, by sympathy, to communicate to his hearer, is plainly and cleverly hit off, then and then only the expression has all the force and beauty that language can give it.


It is not surprising to see an 18th century teacher of rhetoric focus on the need for a clear and plain style. The grand “golden style” prized by famed speakers of the 17th century (see John Donne’s sermons as examples) had fallen out of fashion, particularly in low church and secular settings. The kind of prose that Smith wrote--which often strikes modern readers as ornate and difficult--was a conscious and careful 18th century stylistic choice. It was significantly less ornate than what had gone before. But this is something that Smith had in common with other rhetoricians of his time.

What is particularly Smithian about his discussion of this common goal of clarity, however, is Smith’s focus on communication by sympathy. We use rhetoric, clearly and plainly, but also cleverly, in order to bring our listeners’ and readers’ thoughts and emotions into sympathy with our own. It is that sympathetic response that Smith sees as the goal of rhetoric and also as the gauge of its success.

But engaging the sympathies of your audience and persuading them to agree with you is not without its potential hazards. Plato explores some of these hazards in his Gorgias, where he indicates that an ignorant audience might be more easily persuaded by a gifted speaker with no knowledge of a subject than by an expert who is a less talented speaker. Equally, the powerful tools of rhetoric may offer the opportunity for the talented speaker to tyrannize over others by persuading them to act against their own interest through sheer rhetorical talent.

In other words, when inspired by great rhetoric, sympathy may lead us dangerously astray.

Every discourse proposes either barely to relate some fact, or to prove some proposition…The Rhetoricall again endeavours by all means to perswade us; and for this purpose it magnifies all the arguments on the one side and diminishes or conceals those that might be brought on the side conterary to that which it is designed that we should favor. (Lecture 12)


Smith’s presentation of rhetoric as willfully diminishing or concealing opposing arguments is not particularly good advice about effective persuasion. Any first year writing text will cover the importance of addressing opposing arguments in the course of defending one’s own argument. Instead, his comments are revelatory about his concerns over what happens when rhetoric is used badly, or used in front of an uneducated audience. Those things that the speaker/writer wants to emphasize are magnified, while those things he wants to hide are ignored or intentionally hidden. This is rhetoric as asymmetric information.

...the perfection of style consists in expressing in the most concise, proper and precise manner the thought of the author, and that in the manner which best conveys the sentiment, passion or affection with which it affects or he pretends it does affect him and which he designs to communicate to his reader.” (Lecture 11)


The power of rhetoric to gain sympathy is so great that it can allow an insincere but talented speaker to persuade an audience of things he does not believe at all. Rather than being persuaded and affected by the arguments he makes, Smith warns us, he may simply be pretending to be affected. We risk sympathizing with arguments and emotions that are not actually held, and we risk making terrible choices as a result.

Smith’s discussions of rhetoric are interesting not merely as writing advice or as forerunners of his later discussions of sympathy. They interest me as examples of the kind of cautious evenhandedness that he brings to his later discussions of human nature and institutions when he considers morality and markets. Smith respects and admires powerful rhetoric, but he is aware of the dangers of its misuse, and he is careful to warn his audience about it. Similarly, he respects and admires humans, but knows that we can choose wrongly, do harm, and engage in vicious behavior. And he respects and admires markets, but there have been few people who were more aware of their potential dangers. That nuanced thinking is an example and a result of the good rhetoric Smith wanted to inculcate in his audience, and it is aided by an awareness of the dangers that irresponsibly used rhetoric could bring.