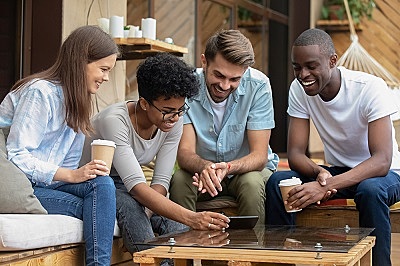 August 10, 2020
Have you ever fallen in love with some new song or YouTube video? You can’t seem to stop listening to it or talking about it, but more than that, you want to show it to everyone you know. You pull it up on your phone or computer and wait patiently for it to load. You are teeming with energy at the thought of your friends experiencing this incredible piece of content for the very first time. You don’t even look at the thing you’re showing them, as your eyes are fixated on the other person. Or, if you are trying to be less creepy and make it seem as though you are enjoying the content as well, you take quick peripheral glances to make sure they are thoroughly enjoying it.


And when you finally see it--that initial glimpse of a smile that creeps across their face, or the subtle bobbing of their knee as they start to groove to the beat--you are filled with almost the same feelings you had when you first experienced it.


But when they don’t; when they look at their phone, express an obviously fake sense of enjoyment, or flat out tell you they don’t like it, the entire experience is virtually ruined for you.


Have you ever wondered why that is?


You may intuitively think it has something to do with vanity or your desire to have others validate your preferences. Or that it is a kind of low-stakes test of your compatibility as friends that they have either passed or failed. But Adam Smith had a very different answer to this question all the way back in 1759.


In The Theory of Moral Sentiments, Smith outlines the foundations of his ethical philosophy. In his view, at the very core of human morality is the concept of sympathy. Smith believes that no matter how selfish humans may seem to be, we clearly have something built into our programming that forces even the most hardened among us to sympathize with others. Smith says, “That we often derive sorrow from the sorrow of others, is a matter of fact too obvious to require any instances to prove it. . .”


When others smile, we find ourselves smiling a bit more as well. When others cry, we find our lips drooping and our eyes softening just a bit. And when we see someone fall, for a split second, it almost feels as though we ourselves are falling. To some lesser degree, we seem to feel a bit of what we see others feel. But what is it we are feeling exactly?


Well, it’s clearly not as simple as saying that we feel what the other person is feeling. I mean, how could it be? You’ve never been anyone but yourself. You have no absolutely idea what the other person is feeling. And that wouldn’t explain all the times you’ve felt embarrassed for someone else, though they seem to remain largely oblivious of the awkward situation they are in. For Smith, what we feel isn’t what they experience, it is what we imagine we would experience if we were in their situation.


That’s why you feel renewed excitement when showing a friend an old favorite, even though it had lost its luster to you a long time ago. Through them you are experiencing, in a muted way, what it felt like when you experienced that content for the first time. In the words of Smith, when we see a friend experiencing for the first time something that we love “we enter into the surprise and admiration which it naturally excites in him, but which it is no longer capable of exciting in us; we consider all the ideas which it presents rather in the light in which they appear to him, than in that in which they appear to ourselves, and we are amused by sympathy with his amusement which thus enlivens our own.”


It is why, on the other side of the coin, when someone doesn’t react how we expected them to, when they seem clearly disinterested in whatever it is we wanted to show them, all of those feelings go away. We are no longer able to experience that renewed sense of wonder.  When this happens, “we should be vexed if he did not seem to be entertained with it, and we no longer take any pleasure in [showing] it to him.”


So, the next time you show your best friend a video and exclaim with delight when they enjoy it, or feel disheartened when they don’t, you shouldn’t feel vain, let down, or confused. Instead, you should appreciate that what you are tapping into is the very core of human morality.

Sympathy, Part 4 of the video series, An Animal That Trades