The Hopeful Vision of Saint Augustine and Adam Smith 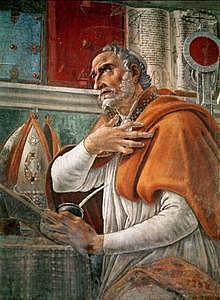 Here I use Tertullian’s formula to ask a different question, “What has Glasgow to do with Hippo?”
Early church theologian Tertullian asked the famous question, “What has Jerusalem to do with Athens?” Writing in the late 3rd century C.E. Tertullian referred to the debate within the church about the proper role of Greek philosophy in Christian theology. Here I use Tertullian’s formula to ask a different question, “What has Glasgow to do with Hippo?”
One can assert, without controversy, that Saint Augustine of Hippo and Adam Smith are two of the most important thinkers in human history. Augustine, writing in the 4th and 5th centuries C.E., is best known for his now classics Confessions and City of God. Smith, writing 1,300 years after Augustine, is known chiefly for The Theory of Moral Sentiments (TMS) and The Wealth of Nations.  Both men offered critiques of their surrounding cultures. Each of these respective intellectual giants contributed to various fields of study, from moral philosophy and ethics to political theory and economics.  The universal influence of Augustine and Smith transcends any notion of “Western civilization,” and their lasting impact offers definitive proof that ideas, indeed, matter.
Despite the scope of their influence, little has been written directly on the relationship between Saint and Scotsman. But through shared ideas and intellectual frameworks, one can say Adam Smith engaged in an Augustinian way of thinking.
The core tenant of Augustinianism as defined in John Passmore’s The Perfectibility of Man is “no man ought ever to claim that he is perfect, since only God can be sure that he is not deceiving himself.” This definition echoes Smith’s view of human nature and his connection to Augustinianism. Historian James Boyce writes in Born Bad: Original Sin and the Making of the Western Mind that “Smith’s explanation for and justification of the free market was thus firmly grounded in an Augustinian perspective on human nature.” This view sees people as naturally selfish, egocentric, and consumed with a propensity for self-love.
Contrary to what many modern detractors claim of Smith, he never approved of this natural selfishness. Yet instead of simply writing morally righteous polemics or utopian fantasies, Smith undertook the harder task of detailing a system of thought that accounted for human imperfection within it. He notes this clearly in TMS, writing: “We are not at present examining upon what principles a perfect being would approve of the punishment of bad actions; but upon what principles so weak and imperfect a creature as man actually and in fact approves of it.” Both Smith and Augustine held to a tragic understanding of human nature, a tragic realism rooted, not in how humans ought to be, but in how they are.
Neither Smith nor Augustine stop with the weakness of humanity or its vices. Starting from their respective vision of the tragic, hope finds a way to blossom. Smith acknowledges the dual sides of our species, noting in TMS that, “The great division of our affections is into the selfish and the benevolent.” It is the latter division Smith and Augustine seek to cultivate and encourage in people.


Augustine and Smith also understood we cannot develop and live out, to borrow a phrase from Lincoln, “the better angels of our nature” alone. Humans are fundamentally social creatures. We do not develop virtue and character in isolation. In his Confessions Augustine thanks God who “hast granted to man that from others he should come to conclusions as to himself.” One way that we, as social creatures, develop character is by studying the lives of moral exemplars to emulate them. Smith writes in TMS “Emulation, the anxious desire that we ourselves should excel, is originally founded in our admiration of the excellence of others.” Even Smith’s famous “impartial spectator” arises from the idea that our behavior is regulated and influenced by others.
What then is the central claim both thinkers are trying to explore? The answer is simple. It is a genuine desire for human happiness. But what of gloomy, hell fire preaching Augustine? It may come as a surprise, but Augustine wholeheartedly agrees with Smith, writing  in City of God “Whoever gives even moderate attention to human affairs and to our common nature, will recognize that if there is no man who does not wish to be joyful, neither is there anyone who does not wish to have peace.”
Smith’s Augustinianism starts by noting we are all imperfect, and yet we are connected in our imperfection. By acknowledging this imperfection, we are freed to humbly do some good in the world while respecting the plight of others. We can cultivate virtue, build character, and demonstrate benevolence together. By exploring Augustine and Smith together, we see how the Scotsman was not alone in seeking to produce, not an impossible perfect society, but a society where we have the freedom to choose to be saint or sinner. A society that promises redemption and growth? Sounds hopeful to me.


As an Amazon Associate, AdamSmithWorks earns on qualifying purchases.