Wash Your Hands. Stop an Earthquake. 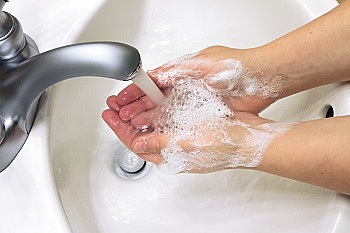 It is a coincidence that today’s health crisis began, like Smith’s earthquake, in China. It is not a coincidence that Smith’s discussion of human behavior during a crisis remains as pertinent today as it was in the 18th century.
Adam Smith’s discussion of a Chinese Earthquake in Theory of Moral Sentiments is quoted so often that I have, at least once, had an editor tell me that I didn’t need to use the quote at all; I could just refer to the example, and everyone would know what I was talking about. The pandemic we face today, however, makes the passage seem so much more important and so much more relevant, that I’m going to quote it in full.

Let us suppose that the great empire of China, with all its myriads of inhabitants, was suddenly swallowed up by an earthquake, and let us consider how a man of humanity in Europe, who had no sort of connection with that part of the world, would be affected upon receiving intelligence of this dreadful calamity. He would, I imagine, first of all, express very strongly his sorrow for the misfortune of that unhappy people, he would make many melancholy reflections upon the precariousness of human life, and the vanity of all the labours of man, which could thus be annihilated in a moment. He would too, perhaps, if he was a man of speculation, enter into many reasonings concerning the effects which this disaster might produce upon the commerce of Europe, and the trade and business of the world in general. And when all this fine philosophy was over, when all these humane sentiments had been once fairly expressed, he would pursue his business or his pleasure, take his repose or his diversion, with the same ease and tranquillity, as if no such accident had happened. The most frivolous disaster which could befall himself would occasion a more real disturbance. If he was to lose his little finger to-morrow, he would not sleep to-night; but, provided he never saw them, he will snore with the most profound security over the ruin of a hundred millions of his brethren, and the destruction of that immense multitude seems plainly an object less interesting to him, than this paltry misfortune of his own.


The stories that initially came to us from Wuhan and then from Italy certainly spurred us to “make many melancholy reflections.” Then, just as rapidly as the “man of humanity” in Smith’s example, we all began to worry about the stock market and our retirement accounts. We then began to watch the news for stories about COVID19, comforting ourselves with the fact that it was still not in our country, then not in our state, and then not in our county.


But now, of course, wherever we are, it’s here. And we are all being asked to make small sacrifices to try to protect people we don’t know and can’t see.


This is all the more the case when we ask young, healthy, less at-risk people to stay home from bars, restaurants, gyms, shows, and other favorite places in order to try to slow the spread of the virus. Even though these people aren’t in grave danger themselves, they could well pass coronavirus on to someone who is.


The governor of my state, like many others, has closed restaurants and bars for this reason. Only an hour after the announcement was made, I hear people trying to figure out end-runs around the measure. Perhaps restaurants can give you food in a take out container and, if you choose to eat it at one of the tables they happen to have, that should be fine, right? Maybe bars can fit a few hundred people into their outdoor courtyards and still keep service going?


Adam Smith might say that the right thing to ask these people is whether they’re really willing to risk killing their grandparents and their immuno-compromised friends in order to avoid losing their little finger.


But he would also tell us not to despair. He believes, and I hope that we will see that the coming weeks prove, that we’re better than that. We wouldn’t watch people die to save a finger. We’d make the sacrifice, stock up on the necessaries of life, hunker down, and listen to our impartial spectator reminding us to care for one another, and to behave with reason, principle, and conscience. And wash our hands.

To prevent, therefore, this paltry misfortune to himself, would a man of humanity be willing to sacrifice the lives of a hundred millions of his brethren, provided he had never seen them? Human nature startles with horror at the thought, and the world, in its greatest depravity and corruption, never produced such a villain as could be capable of entertaining it. But what makes this difference? When our passive feelings are almost always so sordid and so selfish, how comes it that our active principles should often be so generous and so noble? When we are always so much more deeply affected by whatever concerns ourselves, than by whatever concerns other men; what is it which prompts the generous, upon all occasions, and the mean upon many, to sacrifice their own interests to the greater interests of others? It is not the soft power of humanity, it is not that feeble spark of benevolence which Nature has lighted up in the human heart, that is thus capable of counteracting the strongest impulses of self-love. It is a stronger power, a more forcible motive, which exerts itself upon such occasions. It is reason, principle, conscience, the inhabitant of the breast, the man within, the great judge and arbiter of our conduct.

Thank you so much, David! We'll get working on that, and we hope you'll share by cutting and pasting the link or sharing from our Facebook page!