What would Adam Smith think about your iPhone? 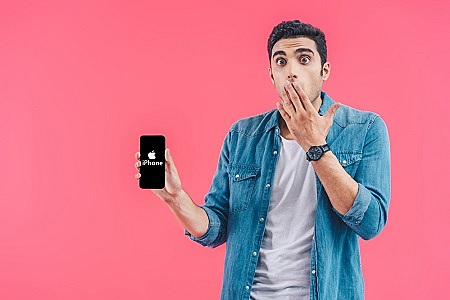 Adam Smith was worried about your iPhone.
In Theory of Moral Sentiments he observes:

How many people ruin themselves by laying out money on trinkets of frivolous utility? What pleases these lovers of toys is not so much the utility, as the aptness of the machines which are fitted to promote it. All their pockets are stuffed with little conveniences. They contrive new pockets, unknown in the clothes of other people, in order to carry a greater number. They walk about loaded with a multitude of baubles, in weight and sometimes in value not inferior to an ordinary Jew's-box [peddler’s box], some of which may sometimes be of some little use, but all of which might at all times be very well spared, and of which the whole utility is certainly not worth the fatigue of bearing the burden. (IV.1.6)


In other words, Smith argues that we love our smartphones and other gadgets not because of what they can do, but because of what clever little toys they are. We like to play.
Certainly those of us who have discovered that we spend more time using our phones to play SpellTower and take pictures of our pets than to send email or make phone calls would have a hard time not agreeing, at least a little, with Smith’s observation.

But it’s not only we moderns who can see ourselves in Smith’s comment. On May 13, 1665, almost a century before the publication of TMS, the famous diarist Samuel Pepys (1633-1703) picked up his new watch from his watchmaker. He wrote in his diary:
[R]eceived my watch from the watchmaker, and a very fine [one] it is, given me by Briggs, the Scrivener.

… But, Lord! to see how much of my old folly and childishnesse hangs upon me still that I cannot forbear carrying my watch in my hand in the coach all this afternoon, and seeing what o’clock it is one hundred times; and am apt to think with myself, how could I be so long without one; though I remember since, I had one, and found it a trouble, and resolved to carry one no more about me while I lived.


Like all of us who swear that we’re going to take a technology break...just as soon as we finish this level of Wizards Unite, Pepys finds that he can’t leave his new device alone. He just has to play with it. Maybe Smith is right, and tech toys are just ruinous and not terribly useful baubles. Pepys surely would have felt at least a little uncomfortable reading TMS, I think.
Four months later, on September 13, 1665, we find Pepys still entranced with his watch:

Up, and walked to Greenwich, taking pleasure to walk with my minute watch in my hand, by which I am come now to see the distances of my way from Woolwich to Greenwich, and do find myself to come within two minutes constantly to the same place at the end of each quarter of an houre.


But something is different here. Pepys mentions that his watch is a minute watch. It has the latest new time-keeping technology—a minute hand. Prior to the great age of timekeeping in which Pepys lived—when the work of Christian Huygens meant that watches became increasingly accurate—watches mostly tracked hours and months. People who needed more precise measurements, like quarter-hours, generally relied on the chimes from the nearest church clock. Having a device that could divide time into minutes in one’s own hand must have felt like a miracle! The pleasure with which Pepys tracks his pace over known distances is certainly evident.
This kind of watch, with its new and modern precision, is exactly what Smith is critiquing. He writes:

A watch, in the same manner, that falls behind above two minutes in a day, is despised by one curious in watches. He sells it perhaps for a couple of guineas, and purchases another at fifty, which will not lose above a minute in a fortnight. The sole use of watches however, is to tell us what o'clock it is, and to hinder us from breaking any engagement, or suffering any other inconveniency by our ignorance in that particular point. But the person so nice with regard to this machine, will not always be found either more scrupulously punctual than other men, or more anxiously concerned upon any other account, to know precisely what time of day it is. What interests him is not so much the attainment of this piece of knowledge, as the perfection of the machine which serves to attain it. (IV.1.5)

Smith may be correct about the moral failings of some of those who own such watches. While setting an alarm on an accurate timepiece can help, only our internal spectator can make us care enough to be on time for meetings.
But does that mean that such timepieces really possess the merely frivolous utility that Smith criticizes? The division of labor that enables the “improvement in the productive powers of labour” that Smith describes in The Wealth of Nations all but requires that time be divided into smaller and smaller segments as jobs become more and more precise. And as the Industrial Revolution gained steam in the 19th century, there was an increasing reliance on clocks to regulate the days of factory workers. Historian Lewis Mumford has even argued that the clock was the “archetypal model” for the Industrial Revolution.
So perhaps Pepys isn’t so frivolous, after all. And perhaps Smith is wrong to criticize his, and our, fascination with the trinkets and treasures that give us new ways to think about our world. Sometimes a small shift in vision, like the new found ability to see a minute passing in front of  your eyes, is really the start of a whole new kind of world.
(But Smith is definitely right about the pockets. Early watches only took off as fashionable accessories when gentlemen’s waistcoats came into fashion. Suddenly there was a new place for a new pocket…and a desire for something to put into it.)

This is one of my favorite parts of TMS, mainly because it speaks to my own vanity about time. I set my watch every single morning. It doesn't need it, mind you. I just do it. Daylight Savings takes me forever because I have six clocks in my small apartment and each one has to be synced to the second! It doesn't make me any more punctual for my meetings. It just makes me happier (and probably drives my roommate nuts).

And I think that's Smith's point about frivolity. Minute- and second-hands on watches are valuable for, say, industrial organization and train schedules because they help coordinate activities. But if the watch is not making me any more punctual does it justify spending more on a nicer watch that better keeps time? We obviously get some pleasure out of the more-perfect system that we now observe, but that pleasure does not come out of the utility of the more-perfect system (contra, I believe, to the arguments Hume and others put forward).

Perhaps Smith is right about watch owners but wrong about the watches themselves? I suspect this is another example of the way in which markets can turn individual vice into a social benefit.