Why Adam Smith Belongs in "The Good Place" 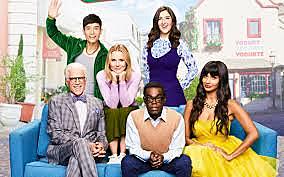 In a show about what it means to become morally good, Adam Smith’s absence is conspicuous. I’d like to suggest that Schur put Smith on his reading list, both because Smith is part of the larger philosophical conversation in which the show is engaged, and because Smith provides an explanation for the characters’ dilemma, as well as a way out.

“How selfish soever man may be supposed, there are evidently some principles in his nature, which interest him in the fortune of others, and render their happiness necessary to him, though he derives nothing from it except the pleasure of seeing it”
--Adam Smith, The Theory of Moral Sentiments

“Yeah, whatever, you know you love it.”
--Eleanor Shellstrop, The Good Place

Spoiler alert:  While I will not deliberately give away events of the show, there are a few spoilers in what follows, so if you haven’t watched the first two seasons, consider yourself warned.

The creative team of The Good Place (NBC) has an unusual goal for each episode; as a comedy, it of course aims to be funny, but the creators also hope to teach the audience something about moral philosophy.  The unusual combination has garnered the show multiple awards in its three-year run, including Emmys, Critics’ Choice Awards, and others.  The show is in its fourth (and final) season) as of this writing, but for the uninitiated, it centers on Eleanor Shellstrop (Kristen Bell), a self-described “Arizona Trash Bag” who finds herself dead and in what the “eternal being” Michael (Ted Danson) tells her is the Good Place.  She is presented with a soul mate named Chidi Anagonye (William Jackson Harper), and an unlikely pairing in their neighbors: British socialite/philanthropist Tahani Al-Jamil (Jameela Jamil) and Buddhist monk/ amateur EMD DJ Jianyu Li/Jason Mendoza (Manny Jacinto).  Risking a season one spoiler, Eleanor realizes that there has been a mistake and that she doesn’t belong in the Good Place.  Luckily, Chidi was a professor of moral philosophy when alive, so she tricks him into promising to help her, begs him to give her “good people” lessons, and sets about trying to earn her placement, post mortem.
In creating and writing The Good Place, Michael Schur has been scrupulous about getting the philosophy right, going so far as to retain professors of Moral Philosophy as consultants to the show.*  And, despite the frequent middle-school humor, the roll-call of philosophers introduced on the show is no joke.


The blackboard at the front of Chidi’s impromptu philosophy classroom puts Plato, Aristotle, Hobbes, Locke, Hume, and Kant squarely in front of the audience.  He himself is a conscientious Kantian, unable to lie in any situation because lying is always wrong, even when the consequences are painful.  Episode 6, Season 2 is titled “The Trolley Problem,” and the action of the show gleefully drags an ever-more distressed Chidi through the real-world implications of the theoretical answers he’s accustomed to teaching.


And in Episode 9, Season 2, the group’s survival hinges on a Kierkegaard reference. This is not your average show.


In a show about what it means to become morally good, Adam Smith’s absence is conspicuous. I’d like to suggest that Schur put Smith on his reading list, both because Smith is part of the larger philosophical conversation in which the show is engaged, and because Smith provides an explanation for the characters’ dilemma, as well as a way out.


There are broad-stroke, big-picture reasons to include Smith’s ideas, particularly those from The Theory of Moral Sentiments (1759), in the show.  When Schur began the show, he described T. M. Scanlon’s What We Owe to Each Other as the “spine” of the show.  Scanlon’s book advances the philosophy of “contractualism,” arguing that our moral decisions are based on what we can justify to others on reasonable grounds.  This ties our moral duties to others – aiding those in need, not killing, etc – to communally-established norms.  Scanlon discusses how we determine right and wrong, and what gives those determinations force.  But the idea of communally-established norms that individuals internalize and use as guides, or the need to make the grounds for your actions palatable to a fellow rational creature is also reminiscent of Smith’s Theory of Moral Sentiments.  As he observes,

man, who can subsist only in society, was fitted by nature to that situation for which he was made.  All the members of human society stand in need of each others assistance, and are likewise exposed to mutual injuries.  Where the necessary assistance is reciprocally afforded from love, from gratitude, from friendship, and esteem the society flourishes and is happy.  All the different members of it are bound together by the agreeable bands of love and affection, and are, as it were, drawn to one common centre of mutual good offices. (85)


That would be a good place, indeed.
To get to his vision of rationally-acceptable norms, Scanlon argues that “we have reason to consider whether there are standpoints other than our own present standpoint from which the principles we are considering could reasonably be rejected” (Scanlon, 202).  He identifies two specific standpoints: “those to whom justification is owed,” or the ones likely to be affected by our actions, and “those who might or might not be able reasonably to reject certain principles” (202).  The second category of standpoint requires a “broader and more abstract perspective” (202).  While Scanlon articulates that the consideration of broad standpoints is necessary because we should think about the implications of wide-spread performance of an action – if our individual action became a general principle – and is therefore slightly different than the approval of the Impartial Spectator, there is enough similarity that Smith feels like a very relevant theorist, with a similar emphasis on realizing our actions might appear differently to other people.


For Smith, the height of morality is “to feel much for others and little for ourselves” (TMS 25), and we get there by becoming so habituated to bringing our emotions into line with those trying to sympathize with us that we construct an “impartial spectator” which becomes an internal guide to proper behavior.  According to Smith, when we suffer, we long for others to sympathize with our pain, to obtain “that relief which nothing can afford [us] but the entire concord of the affections of [our] spectators” (22), but we are aware that they cannot truly feel what we feel.  Therefore, we must lower our “passion to that pitch, in which the spectators are capable of going along” (22).  Smith’s description invokes musical terminology in his depiction of sympathetic harmony. Beyond “pitch,” we are instructed to “flatten” the “sharpness of . . .tone” to reduce our feelings to “harmony” and “concord” (22).  Achieving this harmony requires that we be aware of how we appear to others: “we must . . .view ourselves not so much according to that light in which we may naturally appear to ourselves, as according to that in which we naturally appear to others” (83).  Smith uses the image of a mirror to explain the process by which we learn to anticipate how others view us, how to see ourselves from what Scanlon might call other “standpoints”.  Smith explains that

our first moral criticisms are exercised upon the characters and conduct of other people; and we are all very forward to observe how each of these affects us.  But we soon learn, that other people are equally frank with regard to our own.  We become anxious to know how far we deserve their censure or applause, and whether to them we must necessarily appear those agreeable or disagreeable creatures which they represent us.  We begin, upon this account, to examine our own passions and conduct, and consider how these must appear to them, by considering how they would appear to us if in their situation.


This imaginative leap into the mindset (or “standpoint”) of others is “the only looking-glass by which we can, in some measure, with the eyes of other people, scrutinize the propriety of our own conduct” (112).  Smith’s theories certainly seem relevant to the core moral issues of the series.


There are other reasons to include Adam Smith as well.  Schur has said in interviews that “Aristotelian virtue ethics have” become central to “what the show’s overarching statement about the world is” (Vox), a tradition in which Smith plays a significant role (see, for example, Ryan Hanley’s “Adam Smith, Aristotle, and virtue ethics” in New Voices on Adam Smith).  Additionally, Jonathan Dancy’s concept of moral particularism is a focus in Episode 11, season 2, (“Rhonda, Diana, Jake and Trent”) where it is used both to show Eleanor’s growing philosophical maturity and as the theory that saves Chidi from being discovered by demons.


Again, Smith is considered a particularist (as opposed to a deontologist or consequentialist, positions the show also explores).  For example, Samuel Fleischaker asserts that while virtue does involve some hard and fast rules, in Smith’s theory “within that framework we will operate without rules, trying instead to mold ourselves with the know-how by which an artist molds his clay, such that we develop dispositions to proper gratitude, kindness, courage, patience, and endurance” (Stanford Encyclopedia of Philosophy).  We are all works in progress.


But beyond these broad categorical similarities between Smith and some of the philosophical positions featured on the show, Smith’s theories of moral development offer alternative explanations for the moral quagmire in which some characters find themselves, as well as possible ways out.


For example, Eleanor’s fundamental flaw is her selfishness, which is of course a common condition of humans in Smith’s view. “[T]hough it may be true, therefore, that every individual, in his own breast, naturally prefers himself to all mankind, yet he dares not look mankind in the face, and avow that he acts according to this principle” (TMS, 83).  Smith’s theory is aimed squarely at humans in Eleanor’s predicament – how do we learn to moderate our selfishness?  Of course, Smith, as my epigraph makes plain, believed that we are also wired to care about others.  In fact, according to Smith, “the greatest ruffian, the most hardened violator of the laws of society, is not altogether without it” (TMS, 9).  So Eleanor’s flagrant selfishness provides kind of test case for Smith’s theory.
The implications of Smith’s theory for Eleanor’s backstory and progress will be the subject of future posts.


*Michael Schur is becoming a bit of a regular topic on this site, as he was a co-writer for the American version of The Office, which was the subject of another Speaking of Smith essay.