Why Adam Smith Belongs in The Good Place, Part 2 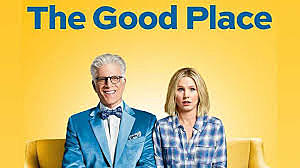 “That trauma?  It can explain away a lot of behavior.”  Eleanor Shellstrop, “Mindy St. Claire”
Why is Eleanor so flawed at the beginning of The Good Place?  As we learn through flashbacks, it is for the very reasons Adam Smith might hypothesize.  The people around us are “the only looking-glass by which we can, in some measure, with the eyes of other people, scrutinize the propriety of our own conduct” (TMS, 112), and Eleanor has grown up in a fun-house of distorted reflections.  As we are shown in multiple flashbacks, wolves would have raised Eleanor more carefully than did her alcoholic mother and pot-smoking father.  In “The Existential Crisis,” (2.5), Eleanor’s mother tells her a string of lies about the family dog’s death, ultimately admitting that she left the dog in the car (it is important to remember that this conversation is taking place in Phoenix, AZ).  She then tells Eleanor to pay tribute to the dog’s life by bringing her mother “another bottle of white.”  On her sixteenth birthday, Eleanor tricks her parents into meeting with her.  She has anticipated that both will have not only failed to get her a present, but forgotten the day altogether, and announces that she got herself a present: emancipation forms.  This way, she tells them, “I won’t owe you anything, and you won’t owe me anything” (“Mindy St. Claire” 1.2).


For Smith, this parental failure is a serious issue: parents “without parental tenderness… appear monsters, the objects, not of hatred only, but of horror” (TMS, 220). While Eleanor uses her poor upbringing as a way to avoid responsibility for her behavior – “I’ve been using their crappy parenting as an excuse for my selfish behavior all my life” (“Mindy St. Claire”) -- that upbringing is, in Smith’s view, a serious handicap.  Of the 50 times he uses “hatred” in TMS, only three times is it coupled with horror (“contempt” or a synonym is the most common pairing), and both other times it is qualified by “and even” or “sometimes even.”  The other instances of “horror” are descriptions of our responses to thieves and murderers or to those so lacking in sympathy to their fellow man that they “break the bands of human society” (TMS, 243).  Being a bad parent is one of the worst crimes that Smith can imagine.


And Eleanor’s flashbacks to her childhood show how warping her mother’s influence was.  In “The Existential Crisis,” when she tells young Eleanor about the dog’s death, she tells her “Don’t get sad.  I’ll get kind of annoyed if you do get sad.”  The effectiveness of this warning is clear later when Eleanor’s father dies; her mother repeats “don’t be sad” when they are at Eleanor’s father’s funeral, and Eleanor insists that she is not.  This explicit quashing of Eleanor’s feelings is obviously cruel, but from a Smithian perspective it can also be seen to give Eleanor a very warped mirror for her own behavior.  Ironically, to receive any sympathy from her mother, to be in harmony with this unreliable spectator, she has to repress her own best impulses.


Eleanor has enough awareness to distance herself from her parents, but over-corrects by distancing herself from everybody.   After Michael tells her she belongs in the Good Place as part of the team, the episode “Somebody like Me as a Member” (1.9) shows flashbacks of her rejecting group after group in her life. In effect she smashes all the mirrors that could have helped her refashion herself, repeating her refrain of not owing anyone anything.  She is left in the position of an isolated human, unable to examine her own behavior because she “is provided with no mirror which can present them to [her] view” (110).


The “friends” she goes on to make are no better than her parents were, and, again, Smith takes this influence seriously.  Our “natural disposition to accommodate and to assimilate, as much as we can, our own sentiments, principles and feelings, to those which we see fixed and rooted in the persons whom we are obliged to live and converse a great deal with, is the cause of the contagious effects of both good and bad company” (TMS, 224).  He asserts that “the man who associates chiefly with the profligate and dissolute, though he may not himself become profligate and dissolute, must soon lose, at least, all his original abhorrence of profligacy and dissolution of manners” (TMS 224).  Eleanor’s rooming situation shortly before her death exemplifies the truth of Smith’s assertion.  A running joke on the show is that having a vanity license plate is cause for being sent to The Bad Place; Eleanor’s roommate Madison declares she’s off to pick hers up when we first meet her, so we know where she is going to end up.  When Eleanor borrows Madison’s dress without permission, rips it, and doesn’t take responsibility, Madison blames the dry-cleaner and sues him. Her other roommate Brittany finds it hilarious.  Eleanor jokingly suggests a t-shirt mocking the litigious Madison, and Brittany creates, orders, and begins selling prints of it.


Eleanor is initially reluctant to participate in this venture, asking “wait a second.  Is this insane?  I mean, should we be doing this?”  When she sees how much money the shirt sales are generating, she capitulates.  In the reset timeline of season 2, when Eleanor tries to turn over a new moral leaf after her near-death experience, Brittany laughs mockingly at Eleanor’s declaration that she is trying to be good, and ditches Eleanor on her birthday to go spend the night with her married boyfriend.  When Eleanor is pensive after nearly being hit by a column of shopping carts and a truck full of “Engorgulate”, as soon as the two roommates establish that their bottle of margarita mix escaped unscathed, they steal the focus of Eleanor’s conversation by trying to one-up her experience.  Brittany clearly thinks she has won the competition when she reveals dramatically that she was in “Syracuse, New. York.” two weeks before 9/11.  These two “friends” are not going to help Eleanor establish moral norms, or even take her own behavior seriously, being themselves completely incapable of sympathy.


At the same time, we see Eleanor’s repeated emphasis on her physical beauty.  Smith gives us a way to think about her vanity, as well.  Smith’s famous metaphor of the mirror of society in which “we scrutinize the propriety of our own conduct” first establishes that our judgement of our physical beauty is dependent on how we see others reacting to us, and “we become anxious to know how far our appearance deserves either their blame or approbation” (TMS, 111).  He tells us that “we are anxious about our own beauty and deformity, only upon account of its effect upon others.  If we had not connexion with society, we should be altogether indifferent about either” (112).


Describing herself as a “straight up hottie,” a “legit snack,” or a “smokeshow,” Eleanor makes plain that while she has avoided moral mirrors, she has spent plenty of time in front of literal ones, andher high opinion of her looks has been borne out by how people treat her.  This empty bravado is often funny, but it is also sad.  It is interesting to note that Smith uses the example of “a woman who paints” being gratified by “compliments that are paid to her complexion” (TMS, 115) as an example of the “ridiculous and contemptible” vice of vanity.  But Eleanor’s repeated insistence on her attractiveness is, at bottom, an indication that she does care what those around her think of her appearance (and that she has a sense of the difference between praise and praise-worthiness: “the thing which, thought it should be praised by nobody, is, however, the natural and proper object of praise” 114), and that she is capable of a “connexion to society.”


Because Eleanor does intuit the difference between praise and praiseworthiness, though she probably couldn’t articulate it in Smithian terms, the way to torture Eleanor, Michael knows, is by surrounding her with people whom she has to admit are better than she is.  Smith observes that “neighbors can be very convenient, and they can be very troublesome, to one another” (TMS, 224). By putting Eleanor in a neighborhood in which she has good reason to believe that all her neighbors are her moral superiors (and in some cases her social, aesthetic, or intellectual superiors), Michael has made her neighbors very troublesome indeed.  Smith believes that “the chief part of human happiness arises from the consciousness of being beloved” (TMS, 41).  Eleanor has a passionate desire to be thought praise worthy, and she is smart enough to realize that she is not.  At the beginning of The Good Place she does not, however, have the emotional or philosophical tools to become so.  As she says, “Good people make me insecure” (1.3).  Her unhappiness in Michael’s false heaven is summed up by Smith: “what so great happiness as to be beloved, and to know that we deserve to be beloved?  What so great misery as to be hated, and know that we deserve to be hated?” (TMS, 113).


Luckily for Eleanor, Michael has as much success as Smith’s “man of system” usually has, and the human chess pieces don’t progress according to his plan.  And just as Smith provides an explanation for Eleanor’s status at the beginning of the show, he also can handily explain her progress once Chidi comes to her aid.  Hint: it isn’t solely because of his ability as a teacher.


Matthews, Dylan.  “How The Good Place taught moral philosophy to its characters – and its creators”  Vox.com, 9/26/19.
Montes, Leonidas and Eric Schliesser, eds. New Voices on Adam Smith (Oxford: Routledge, 2006).
Scanlon, T.M. What We Owe to Each Other (Cambridge, MA: Harvard University Press, 1998).