Why Adam Smith Belongs in The Good Place, Part 3 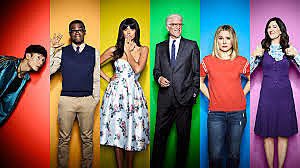 “Holy Mother Forking Shirtballs” (Michael’s Gambit)
The faux paradise that Michael has created in The Good Place is consistently referred to as a neighborhood, and Eleanor is constrained to spend the majority of her time with her three human “neighbors.”  As Smith notes, “neighbors can be very convenient. . .to one another” (TMS, 224), so when – admittedly with very little choice in the matter – Eleanor lets down her guard to the other three humans, she finds at last the positive influences and reliable mirrors she has been lacking.  Her progress is rapid if inconsistent, and her own reaction to flashbacks of her former behavior shows her increased distaste for her own conduct; she is learning to see herself as others with moral propriety would see her.


Chidi is the first one to really challenge her view of herself.  He identifies her selfishness over the course of the first two episodes, noting in the second, “Flying,” that she doesn’t retain any information about him even after they have spent a day together because she is too self-centered to really listen to other people. In this episode Eleanor lies and cheats about helping clean up a mess she indirectly caused.  Chidi discovers the truth, and considers his promise to help her invalidated.  Confronted by someone who views her behavior as inexcusable, Eleanor starts to see her past behavior differently.  The episode is interspersed with flashbacks to how she took advantage of her co-workers by repeatedly weaseling out of their designated driver plans.  She looks increasingly discontent with herself before each flashback, until the third one causes her to get out of bed in the middle of the night to sneak out and clean the neighborhood for real.  Fittingly, there is a spectator of her changed behavior, since Chidi sees her from his apartment window.  When he asks what she’s up to, she attempts to describe her motive as concealment of her past misdeed, not atonement.  Chidi has to label her feeling as remorse for her, and she is defensive about admitting it: “Okay. Yeah, fine.  I felt bad about what I did. . . . It was a weird feeling.  Not used to it.  Didn’t love it.”  But when he commends her for being able to improve, Eleanor is visibly gratified to have a different kind of spectator for a change (especially since he agrees to help her learn to become a better person).


It will take Eleanor many episodes to begin to internalize moral judgements, since she first must develop her ability to sympathize with others.  Chidi again gives her the opportunity.  After Eleanor’s terrible behavior at the opening party, the neighborhood experiences odd catastrophes such as giant shrimp flying through the air or the entire neighborhood being dressed in University of Michigan chevrons.  Because Eleanor initially wants to conceal that she doesn’t belong in the Good Place, she is unwilling to think that she might be part of what is destroying the neighborhood.  Chidi has to point out to her that the chaos is a symbolic exaggeration of her behavior.  When he tells her that he will be tortured by keeping her secret, she is at first incredulous, then pained, and then even more upset watching his suffering when Michael asks the problem resident to step forward. She ultimately reveals that she is the reason that the Good Place is self-destructing because she cannot bear to see Chidi writhing with anxiety over keeping that secret (1.7, “The Eternal Shriek”).  She turns to him, says “I love you, man,” and stands to take responsibility in front of the assembled neighborhood.  She has learned to feel sympathy for others’ feelings.  The show traces her progress toward seeing that to others, she “is but one of the multitude in no respect better than any other in it” (TMS, 83).


Initially, when Eleanor either says something out of synch with the others or confronts a memory of past choices, she avoids removing what Smith calls “the mysterious veil of self-delusion.” Smith describes exactly her desperate tendency to double-down on previous unfairness.  He asserts that “rather than see our own behavior under so disagreeable an aspect” we seek “to exasperate anew those unjust passions which had formerly misled us; we endeavor by artifice to awaken our old hatreds, and irritate afresh our almost forgotten resentments: we even exert ourselves for this miserable purpose, and thus persevere in injustice, merely because we once were unjust, and because we are ashamed and afraid to see that we were so” (TMS, 158).  This is precisely Eleanor’s course at first.


But as she progresses, both in her reboot on earth and over the course of the series, we see her thinking more critically of her past behavior, and correcting her present behavior.  In the reboot, when she doesn’t get the kind of mirroring from her roommates that she needs, she takes to the ubiquitous mirror of Facebook to declare “I think I might be a monster” and announce that she is going to try to change.  She realizes how cruel she’s been to a climate activist - once going so far as to act out how when she can’t see him, he doesn’t exist for her – and goes to apologize.  Though he cowers in front of his bully, he does call her out on her non-apologetic apology; unlike in interactions with her co-workers in previous past scenes, Eleanor now cares how her actions look to someone else, so she apologizes for real.  She then goes on to surround herself with better mirrors by joining the climate activist group.  For months, this setting leads her to improve her behavior; in one scene of the montage, we see Eleanor catching her new friend watching her approvingly as she hands out pamphlets.


That many of Eleanor’s flashbacks to times she refused to be part of a team occur as she is asked to be part of Team Cockroach shows that she is rethinking her previous decisions and that she has come to recognize not just what she owes to those around her, a la Scanlon, but that their responses to her behavior can help her shape her moral choices.  As she herself later observes, “it took dying and being around a bunch of good people to realize I was kind of a nightmare” (Mindy St. Claire).


Other characters have to learn Smithian lessons as well.  Tahani has to learn the difference between praise and praise worthiness.  She continually brags about having raised nearly sixty-million dollars, but it becomes clear that her real motivation was not to help anyone, but to upstage her avant-garde artist sister Kamilah.  Her flashback makes it plain that she learns that difficult lesson.  Michael allows her to see that in an effort to pull down a golden statue of Kamila, she was crushed to death.  Tahani finally sees her behavior for what it was: “Is that really all I cared about? Just outshining my sister and gaining praise and acclaim?”  The dialogue makes clear that this is a hard lesson for her to learn, as she continues, “’Cause, I mean, I did gain praise and acclaim.  I dare say, on occasion, more praise and acclaim than my sister Kamilah, so. . .  Oh.  Oh I see” (“Team Cockroach,” 2.3).  This revelation helps her distinguish between being praiseworthy and merely garnering praise.  Smith would have judged that she had gotten her cart before her horse, since “so far is the love of praise-worthiness from being derived altogether from that of praise; that the love of praise seems at least in a great measure, to be derived from that of praise-worthiness” (114).  This is a lesson that we will see Tahani has to keep learning (as when she is tortured through “event-planning mishaps, and it works!” “Existential Crisis,” 2.4).


To avoid spoilers, this analysis has focused primarily on the first two seasons of the series, but the show continues to present characters who could learn a thing or two from Smith.  Arguably, Judge Gen (Maya Rudolph) fails at having sufficient sympathy with humans to evaluate them properly.  A more pressing case is currently unfolding on the series.  The current (final) season features the all-too-believable character/caricature Brent Norwalk (Benjamin Koldyke).  Eleanor mutters that he was “born on third base, thinks he invented baseball” (“Girl from Arizona” 4.1).  Continually asserting that the Good Place is not good enough for him, cracking sexist and racist jokes, treating Janet like a personal assistant, and in general being a spoiled and pompous jerk, Brent clearly doesn’t see what he looks like to other people, because he cannot imagine life from any position other than his own  Any attempt to unseat his ego will require that he make that imaginative leap, and Adam Smith, with his emphasis on seeing ourselves as others see us to judge the propriety of our actions, would be a lot of help.


So if in the coming season, the Bad Place crew decides to hide Chidi’s beloved Kant, or the more recent titles by Scanlon or Dancy, Adam Smith’s Theory of Moral Sentiments would be enough to help get the four friends where they are trying to go.