Adam Smith, Classical Liberalism, and the Legacy of Hispanic Scholasticism, 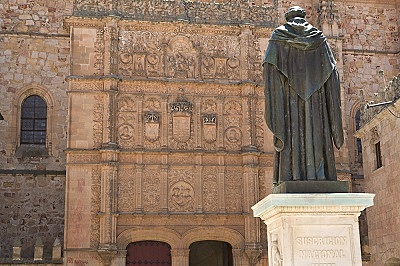 January 27, 2021
Hispanic Scholastics in the 16th and 17th centuries sought an intellectual synthesis between ethics and commerce and shaped economics as a discipline. Grounded in Western philosophy, Hispanic Scholastics, sometimes referred to as the “School of Salamanca,” followed a methodology based on universals built into the human condition. Applying logic to what is known with a measure of certainty, they outlined moral obligations necessary for temporal well-being.


Salamanca
In the 16th and 17th centuries, as the boundaries of the known world exploded, several Dominicans held chairs in Theology at the University of Salamanca where an important neo-scholastic revival was underway. Their legal, political, and economic commentaries merged Thomistic theology and Humanist philosophy to create a body of natural, international, and economic law. This coincided with their pastoral role in encouraging Christian conduct in economic affairs.

The Salamancans influenced another Dominican, Bartolome de Las Casas, in opposing the evil treatment of Native Americans. Las Casas is widely recognized for this and for publicly raising the legitimacy of self-rule. Our focus here, however, is on how Hispanic Scholasticism relates to classical economics in the tradition of Adam Smith.

The Hispanic Scholastics pioneered the quantity theory of money and purchasing power parity to explain foreign exchange rates, concepts foundational in the canon of economics. Three additional contributions subsequently merged with mainstream economic thought: the subjective theory of value, “just price”, and consent of the governed.

The Subjective Theory of Value
The Hispanic Scholastics formulated a subjective (not to be confused with relativistic) theory of value for all goods including money. Their writings emphasized wellbeing as the primary economic goal and viewed the ordinary person as a consumer rather than a producer.

Viewing consumption as the end of all economic activity means value is subjective, based on people’s needs and wants, even when those needs and wants are foolish. A subjective theory of value neither guarantees profit nor justifies prices as having to cover expenses. Late Scholastic Juan de Medina warns merchants who wish to operate justly to realize that sometimes they are going to lose (See De Contractibus, 95. Chafuen, Faith and Liberty, 88).

The Hispanic Scholastics acknowledged that both buyers and sellers act with purpose and that both benefit from exchange. Although the Scholastics condemned merchants who took advantage of competitors and of consumer ignorance, they argued that justice requires virtue rather than regulation.

Market transactions came to be seen by the Hispanic Scholastics as morally indifferent, unlike other forms of human behavior. Domingo de Soto wrote that a system of distribution beyond that provided by public servants was necessary. Commercial contracts and personal obligations became the focus. As such, De Soto held, a good is worth whatever it can be sold for, excluding cases of fraud and malice (See DeJustitia et Jure in Grice-Hutchinson, Loc 1296).

The “Just Price”
The purpose of a bushel of wheat is to satisfy hunger, but what determines its price? Although schooled in the “just price” tradition of Aristotle and Aquinas, Hispanic Scholastics noticed that observed prices could not be explained apart from relative scarcity.

Gaps between costs and affordability concerned these scholars. In effect, de Molina argues for income transfers to the poor rather than fixed prices (See De Iustitia, disp. CCCLXIV, pt. 3 in Faith and Liberty, 2003, 88). This insight into the role of prices in allocating resources is significant.

Although Hispanic Scholastics did not question authorities’ right to set prices, legal prices should compensate merchants for their costs. When legal prices become out of line with generally accepted prices, unjust official prices do not “oblige.” The Late Scholastics also condemned monopolies, not because of size, but rather because they involved cornering markets. They considered monopoly profits secured through secret agreements or official privilege to be unjust.

Martín de Azpilcueta Navarro, a well-known Salamancan writer on economic issues, connected rampant 16th century inflation to the large-scale import of specie from the New World. He came to view money like any other good, with a value that changes depending on its scarcity or abundance. For example, merchants paid premiums in Spain for money delivered in Flanders and received discounts in Flanders for money delivered in Spain.

These premiums and discounts lay in the nature of money itself. By 1560, the traditional differentiation between the ‘intrinsic’ (metal content) and ‘extrinsic’ (exchange) value of money had faded away. It was replaced by the distinction between a combined metal/official rate and a ‘common estimation’, the subjective value traders were actually willing to pay or accept.

Hence, prices were increasingly acknowledged to be determined by the availability of money and the relative scarcity of goods and services. Given this, certain aspects of monetary exchange became questionable.

For example, was it licit to charge more than the legally fixed commission in exchanging currencies? Did a percentage of these fees for monetary transactions contain a time element that was essentially interest? Interest paid simply for the use of money for a certain period was, until the 18th century, condemned by the Church as usurious. Late Scholastics attempted to deal with these economic issues while maintaining consistency with Christian principles (See Molina-DII II, 315 in Izbicki and Kaufmann, "School of Salamanca", The Stanford Encyclopedia of Philosophy, Summer 2019).


Consent of the Governed
Whereas Dominicans focused on commercial ethics, Jesuits helped bridge the transition between early Scholasticism and natural philosophy. Francisco de Suarez, who passed through Salamanca, concluded, along with fellow Jesuits, that government rests on human consent rather than divine right. They argued that political power is contractual, formed by a consensus of free wills. Society has standing prior to government. This did not make Jesuits popular with royal authorities!

This cry for liberty was an extension of subjective value, suggesting that forms of government and civil law differ over time and place. People grant authorities the power to defend, protect, and punish. However, this does not imply that people are always right.

Civil authority was a means for furthering the common good. Thus, government held control over public property plus the ability to tax and to promulgate laws. Ideally, civil law represents the best that human nature, based on reason and inspired by revelation, is capable of providing.

The Hispanic Scholastics criticized excessive government spending and debasement of the currency. Unsustainable public debt entangles a republic with evil. Thus, Juan de Mariana was a harsh critic of rulers that engage in war after war, enrich themselves, and construct monstrous monuments over the protests of their subjects.

Some Scholastics argued for increasing national defense expenditures, and others criticized engaging in excessive wars. They concurred, however, that whatever one believed to be the common good never justifies the dominance of particular interests or measures contrary to the natural rights of persons.

Linking Hispanic Scholasticism and Classical Economics
Across the English Channel, classical economists stressed production, inputs, and cost. Dutch scholar Hugo Grotius (1583-1645) had quoted Leonardo Lessio (1554-1623), Suarez’s student, at length. Grotius remains a recognized authority on national and international law, and along with German jurist Samuel von Pufendorf he established a Protestant natural law tradition. This tradition was subsequently passed on to Adam Smith by Francis Hutcheson at the University of Glasgow (Jeffrey T. Young. “Law and Economics in the Protestant Natural Law Tradition,” Journal of the History of Economic Thought, September 2008, 283-296).

Hutcheson, Glasgow philosopher in the Protestant law tradition, introduced a subjective element into the supply of labor. Subsequently, Smith, a student and colleague of Hutcheson, referred to the distastefulness of certain types of work in explaining wage differentials.
Measuring hours of labor and other inputs is relatively straightforward. However, subjective satisfaction, referred to as utility in economics, is incapable of measurement. A theory of behavior describing how consumers reveal preferences was needed. The time had not yet come to advance theories of value into a more coherent synthesis, combining subjective and objective elements.

In the 1870s, Carl Menger, chair of economics in Vienna, defined the value of an economic good in essentially Hispanic Scholastic terms, i.e. the ability to satisfy a human need. Leon Walras, a French land reformer, modeled money into ratios of exchange between goods. Stanley Jevons, a British economist departing somewhat from Smith, derived the value of goods from revealed intensities of satisfaction. Within four years Menger, Walras, and Jevons independently set the precedent for marginalism, the economic theory explaining market prices.

Property Rights
Hispanic Scholastics did not explicitly justify interest in terms of the time value of money.  Pufendorf made this connection. He declared that it was not contrary to nature to rent one’s own property (Chafuen, Faith and Liberty, 147). This raises the issue of property rights.

For Adam Smith, natural law meant protection from bodily harm and no unnecessary constraints on liberty. Property rights, Smith maintained, are not self-evident based on natural law alone. Natural reasoning is required to ensure just civil laws regarding property.

Exclusive privilege to property, according to Smith, arose from custom and a nation’s experience. This spontaneous order theory arises out of the interactions of persons in which rules, conventions, and institutions make society possible (Young). Note that this understanding of Smith’s “invisible hand” is social rather than mechanistic!

The Scholastics, like Smith, viewed private property rights narrowly. They considered them an addition to natural rights, an issue of civil and revealed law. However, private property, necessary to fulfill human needs, requires legal protection consistent with the natural order of things.

The rationale for private property for both classical economists and Hispanic Scholastics was utilitarian, the most effective means for satisfying human needs and maintaining social order. The Hispanics argued persuasively that things are better used when they are privately owned than when they are held in common. The question then arises as to the appropriate use of property that is held privately. Francisco de Vitoria defined the “domain” of personal property as the faculty to use a thing according to reasonably established laws, even to the extent of destroying it.

Domingo de Soto wrote that a person’s willingness to transfer property to another is a form of natural, not civil, justice. Donations are a moral obligation. Transfers should be voluntary because the poor cannot discern the subjective value goods have for those who own them. Conversely, de Vitoria describes situations in which it may actually be acceptable to steal from the rich given the intention of restitution! (Faith and Liberty, 40-43)

Classical economists were not likely to engage in the situational ethics of theft, and Hispanic Scholastics would have difficulty accepting human consciousness subjected to mechanistically determined prices.

Yet, the Hispanic Scholastic and Protestant natural law traditions both were instrumental in their attempts to eliminate slavery and other threats to life. Our times call for further clarification of what is a natural right. Presently, a decent standard of living and just compensation for services rendered are at issue. Seekers of truth use reason and logic in working towards a legal and institutional framework ensuring both justice and prosperity. Economists should not exclude Jerusalem or Athens or, for that matter, Salamanca or Glasgow from this discussion.

Paul Mueller and Jan Gerber, What is a Just Price, at Econlib