Smithian Sympathy in the Arabian Nights

by Khalil M. Habib for AdamSmithWorks 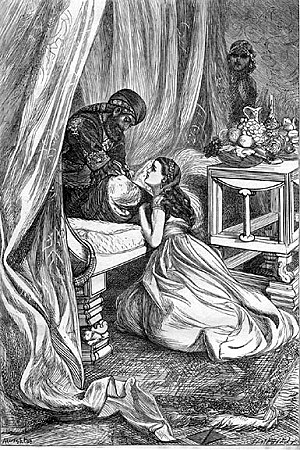 
What is true about the market is true about political life. Just as “our ability to trade rests upon our ability to imagine the needs and desires of other people,” our ability to govern with justice and moderation rests on our ability to imagine the needs and desires of others, which rests upon our ability to imagine their lives and their situations. And literature, like theater, can teach us to sympathize with others. After all, for Smith, “the emotion which we feel for the misery of others, when we either see it, or are made to conceive it in a very lively manner,” causes us to imaginatively “place ourselves in his situation …we enter as it were into his body, and become in some measure the same person with him, and thence form some idea of his sensations, and even feel something which, though weaker in degree, is not altogether unlike the sentiments of the “person principally concerned.” [1] Like theater, literature has the power to make the reader see the world through the eyes of those who suffer or who are moved to noble action by a sense of justice. Story has the power to put us in touch with another human spirit and to see the world in all its pettinesses and its grandeur. For these, among other reasons, literature is a powerful vehicle for moral and social transformation.


The enchanting and strange stories in the Arabian Nights contain subtle and deep reflections on despotism and justice that anticipate some of Smith’s moral psychology. The stories that comprise the Arabian Nights grew out of Islamic oral tradition and were collected during the Islamic Golden Age between the 15th and 16th centuries. During this watershed moment in Islamic history, various unknown authors from many areas throughout the Islamic world added stories to the collection and refined its message. The overarching theme of these tales is the fragility of human existence and the reversals of fortune that permeate the human condition. The stories are a reminder of the capriciousness of human existence, and they teach sympathy through the power of literature.


The problem at the heart of the Arabian Nights is how to compel a violent autocrat to believe that others matter. The Arabian Nights depicts the moral education of one such tyrant who is transformed through the power of story. The main storyline is set during the reign of a despotic and brutal King named Shahryar. One day Shahryar discovers one of his wives in bed with a lover. Incensed, he kills them both and throws them into a ditch. Vowing vengeance upon all womankind, he decides to marry and then kill a new woman each day until his kingdom is empty of all women. Each day he marries a new bride and kills her upon consummating the marriage. No one within the helpless kingdom dares to challenge him or put an end to his violence. He brutalizes the helpless because he can, and he can act on his violent will because he is incapable of imagining the same done to him.


Although Shahryar is the ruler of a kingdom, he is isolated from others in any meaningful sense, and consequently he is without regard towards his subjects. To borrow a line from Smith, he is like “a man who from his birth was a stranger to society, the objects of his passions, the external bodies which either please or hurt him, would occupy his whole attention.” [2] He lacks, in other words, what Adam Smith calls sympathy. Consequently, countless innocent women are killed until Shahryar meets his match in the figure of Shahrazad, the heroine of the Arabian Nights, and as the story opens, next in line to be killed.


Shahrazad delays her death (and thus saves her life and the lives of the women who would have followed her) by interesting the tyrant in her tales. Each night she enchants the king with a strange and exciting new story--each tale nesting within or growing out of a previous tale, until multiple tales are woven together from various threads, and a new narrative unfolds. By the end of the Arabian Nights, the King is transformed from a brutal tyrant to a moderate ruler. Her stories succeed in awakening within him his capacity to sympathize with others. Each of Shahrazad’s stories adds a variety of characters and circumstances designed to make Shahryar learn to sympathize with others: A king is reduced to nothing; a Prince is betrayed and turned to stone; a poor man becomes rich and powerful; a rich man reduced to poverty, and so on.


Her stories insist that humans never really know their fate, especially arrogant kings and princes. The reversals of fortune throughout the stories are enough to humble the worst tyrant and make him think twice about being emotionally isolated from others or thinking he is exempt from the human condition. His unchecked authority encouraged him to abuse his power, but the stories transformed him by extending his sympathy towards others and making him human.  “Pity and compassion,” Smith reminds us, “are words appropriated to signify our fellow-feeling with the sorrow of others." [3] Shahrazad draws out the king’s impartial spectator and stimulates his sympathy into action by helping him imagine characters and circumstances to which he can relate.


In order to make good moral judgements and imagine ourselves in the place of another, we must become impartial, well informed, and attentive spectators who can observe others and sympathize with them. Shahrazad’s strategy of creating stories within stories instills patience and attentiveness in Shahryar. As he listens he learns to be patient, to delay instant gratification, and to gather more information about the circumstances that brought about the strange changes in the lives of the main characters. Sympathy, as James Otteson reminds us, develops over time.

Because we all seek out this “sympathy” ...much of social life is a give-and-take whereby people alternately try, on the one hand, to moderate their own sentiments so that others can “enter into them” and, on the other hand, try to arouse others’ sentiments so that they match their own. This process of mutual adjustment results in the gradual development of shared habits, and then rules, of behavior and judgment about matters ranging from etiquette to moral duty. This process also gives rise, Smith argues, to an ultimate standard of moral judgment, what he calls the “impartial spectator,” whose imagined perspective we use to judge both our own and others’ conduct. [4]

Habits must form before the impartial spectator can take root and blossom into a psychological mechanism that helps to regulate and moderate our behavior in relation to others. Hence, it requires a thousand and one nights to moderate this tyrant! The volume of stories not only helps to delay Shahrazad’s execution but also generates a climate of curiosity that works on the king’s imagination, creating a relationship between him and the characters, that helps him learn to sympathize with them.


The Arabian Nights, Sympathy, and the Impartial Spectator
The Arabian Nights establishes something like Smith’s notion of sympathy and the impartial spectator early on in the prologue. The framing narrative doesn’t just introduce us to Shahrayar, the tyrant. It introduces two brother kings, Shahrayar and Shazaman. Both discover they have been cuckolded by their wives. Upon discovering that his wife has cheated on him, and then learning that his sister in law has cuckolded his brother, too, Shazaman observes the following: “This is our common lot. Even though my brother is king and master of the whole world, he cannot protect what is his, his wife and his concubines, and suffers misfortune in his very home. What happened to me is little by comparison. I used to think that I was the only one who has suffered, but from what I have seen, everyone suffers. By God, my misfortune is lighter than that of my brother.” [5]
Note the emphasis on “common lot” and the realization that “everyone suffers.” Through sorrow and anguish Shazaman is brought to sympathize with those who suffer. The comparison to his brother makes him an impartial spectator and heightens his attentiveness, leading him to conclude that “everyone suffers.” The problem, of course, is that Shahryar does not have this sensible perspective. How can one get the older and violent Shahrayar to find common ground with others, particularly those who suffer at his own hands?
One example of the stories by which Sharazad cures Shahrayar of his tyrannical selfishness must suffice. The first series of stories she tells are about justice and forgiveness.The story from the first of the Thousand Nights is “The Merchant and the Demon.” An old and prosperous traveling merchant stops to rest and eat. He throws date pits “right and left until he had enough.” [6] Suddenly, and without warning, an old demon brandishing a sword appears: “The demon approached until he stood before [the merchant] and screamed, ‘Get up, so that I may kill you with this sword, just as you have killed my son.’” When the merchant asks the demon who brought about the death of the demon’s son, the demon informs him that one of the date pits the merchant threw struck and killed the demon’s son. The merchant begs for his life and invokes Muslim piety: “To God we belong and to god we return. There is no power or strength save in God the Almighty, the Magnificent. If I killed him, I did it by mistake.” The demon, however, operates according to the pre-Islamic rules of justice: “I must kill you as you killed him -- blood for blood.” The demon’s principle of justice, if we may call it that, is the pre-Islamic principle of “blood for blood,” which seeks revenge upon individuals regardless of their intent and circumstances.
Although the story is strange and amazing, it is easy to see how it parallels the situation of Shahrayar, who kills innocent virgins in order to punish the transgressions of his dead wife. By subtly associating Shahrayar’s behavior with the demon’s, Shahrazad compares herself to the innocent merchant. Shahrazad and the other women killed by Shahryar, like the merchant, are innocent of any crime. Sharazad uses the story to remind the king of the dangerous blasphemy in following impious, pre-Islamic notions of justice. No king, including Shahrayar, is above Muslim piety. By introducing characters whose behavior resembles the king’s behavior she is able to veil the king’s identity in a story in order to get him to judge the situation impartially. She cleverly encourages the king to place himself, “in [another’s] situation . . . and become in some measure the same person with him.” Once the king is able to sympathize with others he can begin to exercise the discernment and judgment of an impartial spectator and rule with justice, rather than vengeful anger. Over the course of a thousand and one nights, Shahryar eventually comes to “see himself” and his actions through the eyes of others and moderate his behavior.  Each tale helps Shahrazad to awaken within the king a sense of sympathy and justice. By the end of the Arabian Nights, the King accepts Shahrazad as his Queen and his violent rule comes to an end.