Trade for the Win!

This lesson allows students to experience the benefits of trade that Adam Smith wrote about in An Inquiry into the Nature and Causes of the Wealth of Nations. 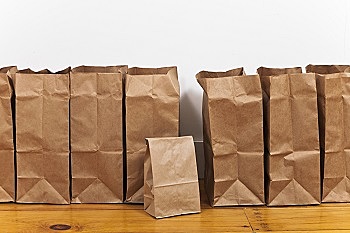 Intended Audience
This lesson is applicable for elementary, middle school, and high school students.
Content Standard:
Voluntary exchange occurs only when all participating parties expect to gain. This is true for trade among individuals or organizations within a nation, and among individuals or organizations in different nations.
Objectives:
Materials:
Time Required:  1 class period (approximately 50 minutes)
Prepping bags requires extra time.  Again, seek out help from your parent-teacher organization or have students bring in pre-filled bags.

Procedure:
1. Before beginning the simulation, place the trading items in brown paper bags and seal them. Divide the bags into groups of about 5 or 6, depending on class size.  Each group should have bags with different items. If you use gift cards, there should be one gift card in each bag.  If you use other items as mentioned above, items may be divided unequally and could be divisible for bags with multiple items

2. Explain to students that today they have an opportunity to participate in a trading activity. The purpose of the activity is to explore why people trade.

3. Ask, “Why do people trade?” Record some student responses on the board and indicate that these responses. Explain to the class that they engage in trade frequently when they purchase goods and services.  Trade can be very personal with voluntary exchange and can extend to organizations from different countries engaging in the same voluntary exchange.  Explain that this activity will provide information and experience to demonstrate this.  Define the word utility to mean satisfaction from purchasing/consuming a good or service.

5. Assign 5-6 students to each group and direct groups to locate in specific areas within the classroom.  Announce to students that you are going to give them bags, which they will then own, and ask them not to open the bags until told to do so. Distribute the bags so that each group has a variety of options.

6. Ask students to open their bags and look at the object WITHOUT removing it from the bag or showing it to anyone else. Direct students to rate their satisfaction with the bags using a show of hands and a 1-5 rating system in which 5 is high and 1 is low.  Students should also write the rating on the paper bag so that they can see the difference in each round.
(Ask for a show of hands for each rating – 1, 2, 3, etc., and record tally on the board or overhead transparency and ask students to record the tally on their handout (if using). Every student should vote in each round.)

7. Tell students they may now take the objects out of the bags. Remind students that they own what is in the bag and that they may trade or not.  They may trade parts or all or nothing. Allow students in small groups to trade among themselves.  Repeat the 1-5 evaluation by show of hands, reminding students to rate what they now have in their possession, and reminding them that they must rate their bags again whether they traded or not. Students should record the rating on the paper bag.  (Note that students may change their ratings even if they don’t trade. Be sure that every student votes, even if he hasn’t traded or changed his satisfaction rating. Record the tally on the board with a different colored marker than the first tally and have students update their ratings and the class tally on their handouts.)

8. Conduct one more additional trading round, combining groups and having all class members trade.  (There are other variations of this simulation which offer an additional round of sub-group trading.  Feel free to adapt, but the point is made using less time with only three variations). Allow enough time for students to move around the class and evaluate their trading decisions.  Again, they don’t have to trade if they do not wish to.
(Ask for a show of hands for each rating – 1, 2, 3, etc., and record tally on the board or overhead transparency. Every student should vote.)

9. While the students are trading, or after all trading is completed, calculate the total “satisfaction points” for each round. Record the total below each tally.  Students should record their individual rating on the paper bag they were originally given.  They should have a score for each round.


DEBRIEF
Extensions:
Several video resources support the lesson.
An Animal That Trades is a video series from AdamSmithWorks.org in five parts. Each part is useful for discussion of how trade influences and is influenced by the theme of each video. If only one video can be used, Part 3 is the most relevant to the discussion.
Part 1: The Invisible Hand (6:43)
Part 2: The Free Market (7:36)
Part 3: Division of Labor (8:51)
Part 4: Sympathy (8:52)
Part 5: The Role of Authority (9:10)
Full Feature (40:42)


It could also be very effective to have high school students read an essay to discuss after taking part in the trading game.

“Division of Labor Part 1” by Michael Munger (AdamSmithWorks, or as handout)
“Economics and the Ordinary Person” by Samuel Fleischacker (EconLib)

Trade for the Win adapts procedures used in “Why Do People Trade,” Master Curriculum Guide In Economics International Trade, by Donald R. Wentworth and Kenneth E. Leonard (Copyright 1988 by the National Council on Economic Education),  as well as the Foundation for Teaching Economics  “The Magic of Markets: Trade Creates Wealth”.