Happiness in Times of Crisis 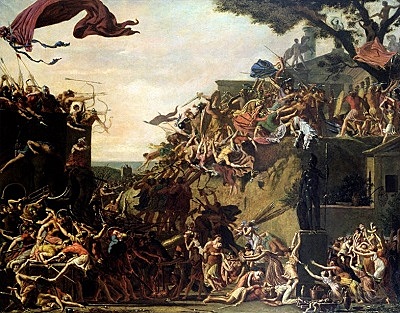 By François Topino-Lebrun - Public Domain
"In highlighting the anecdote of Pyrrhus and Cineas, Smith moves away from an answer to the happiness question that is merely economic or material."
How can we maintain or achieve happiness in a time of crisis? To consider this question, this post will unpack a short story to which Adam Smith dedicates a few paragraphs in "The Theory of Moral Sentiments". On that occasion, Smith recounts an anecdote from the life of the Greek king Pyrrhus of Epirus, a story that Smith says he first read in Plutarch's "Lives". That passage, my favorite of all the illustrious Scotsman’s great work, tells us that Pyrrhus is in the middle of planning an attack on Rome. However, his favorite advisor, Cineas, questions Pyrrhus about it and advises against that decision.


Disagreeing with a king is not usually an easy pill to swallow, so Cineas makes a logical bypass, expressing himself in a fashion that I will now paraphrase: "It is reported that the Romans, Lord, are great warriors and conquerors of many warrior nations. If we were to win that battle, what would we do with that victory?”


Pyrrhus, already satisfied with the answer he will give to his subject, replies that once he conquers Rome, he will conquer Italy. Cineas continues the line of inquiry, and Pyrrhus once again responds in kind: After Italy we will conquer Sicily. After Sicily, Libya and Carthage. Finally, all of Greece. The pattern is simple, as Cineas ends up asking Pyrrhus again and again: "And then what?"


Smiling, Pyrrhus tells Cineas that later they will be drinking all day, enjoying the pleasures of conversation with friends, and living in peace. Cineas responds right back to his master: "And what's stopping His Majesty from doing all that right now?"


Smith understood and wrote about our natural inclinations and desires both to be loved and to be lovely. Which is to say, he made explicit our desire to be deserving of the love we get, and not just to be loved without deserving it. Perhaps one of the great questions stemming from Smith’s insight is this: How can we be both loved and lovely? And there the image of the conversation between Pyrrhus and Cineas appears again. The Scottish philosopher gives us a glimpse into the past in order to try to help us discover the essence of a good life. In highlighting the anecdote of Pyrrhus and Cineas, Smith moves away from an answer to the happiness question that is merely economic or material (as some might mistakenly suppose about him if they only encountered Smith in "The Wealth of Nations”).


For over two hundred years, what has come to be known as the “Das Adam Smith Problem” or the Problem of the two Adam Smiths, has been hotly debated. It is only a problem, however, if interpretive primacy is placed on one of his two seminal works. A symbiotic reading of both, taking into account their context and the importance that Smith dedicated to his Theory of Moral Sentiments until the end of his days, will indicate that both books are the product of the same author. The “two Adam Smiths” are the front and back of the same coin.


The attentive reader might wonder, then: how does the fable of King Pyrrhus of Epirus play into all of this? What fundamental role, if any, does it have in Smithian philosophy? Was the happiness question important to the revered Scotsman? It is noteworthy that Smith tells us of a Pyrrhus who is projecting a trail of battles and conquests. It is not the Pyrrhus that, probably, many people of the time knew (and continue to know today). I am referring, obviously, to the Pyrrhus of the Pyrrhic victory. The one that Plutarch says would have expressed the following: "Another victory like this and I will be defeated."


That is the Pyrrhus who is usually remembered, especially for his battles in Rome, on account of their great human cost. He is a symbol of victory attached to failure. His name reminds of a victory that seems more like a defeat than a success. "Pyrrhic victory" is a term that has entered our popular lexicon, at least in the English and Spanish languages, and one that is repeated even by those who know very little about Pyrrhus. In this sense, it is vital to bring up that Pyrrhus of Epirus knew how to reap great successes on the battlefield, at the same time as resounding losses, and that he toured much of the ancient world.


However, it was in Argos that Pyrrhus ended up meeting his unexpected death. As his armies were withdrawing from that city, Pyrrhus decided to attack a soldier who had wounded him. The mother of this soldier, who was looking at everything from above a roof, threw a tile at Pyrrhus’ head, making him faint. There he lay, his fate in the hands of his enemies, without him knowing it. He, Pyrrhus, who had fought and won against Persians, Romans, Carthaginians, Macedonians, and Spartans, died from the unexpected action of a mother who was worried about her son. The sudden demise of Pyrrhus further serves to highlight the unexpected turns and twists of life.


That is precisely why we must return to Pyrrhus’ talk with Cineas. We should not focus our attention so much on Pyrrhus, but rather on his advisor Cineas. Cineas is asking us through Pyrrhus the following question: Why make so much trouble trying to conquer the world to be happy, if we can be happy and satisfied right now? Fortunately for us, even though Pyrrhus ignored the considerations expressed by his faithful servant, we don’t have to make the same mistake.


These ideas of ambition and contentment are of particular importance during this pandemic era, a time when crises of all kinds have taken ahold of our lives. Like Epicurus of Samos, one of the first proponents of practical philosophy—what we could call a philosophy geared toward our leading better lives—Smith wanted to bequeath us advice so that all his readers could live better lives and be happy.