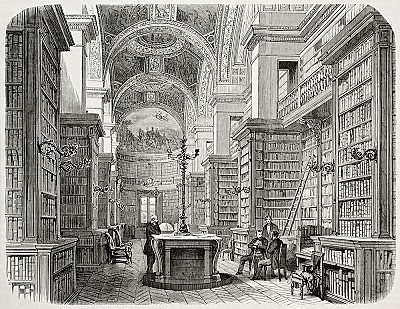 One way to investigate the broader impact of Smith’s writings is through the lens of eighteenth-century subscription libraries.
Adam Smith’s reputation as an Enlightenment intellectual was impressive. His student John Millar called him the Newton of the discipline of the history of civil society, with Montesquieu being the Bacon. Smith’s first book, The Theory of Moral Sentiments (TMS, 1759), made him a literary celebrity in Britain as well as in Continental Europe. Smith’s close friend David Hume joked that the “mob literati” in London was loud in its praises. Despite being ecstatic about the book’s performance, Hume was concerned that the Wealth of Nations (WN, 1776) would not be met with initial popularity since it required so much attention from readers. In the end, it proved to be a rather unlikely commercial success, as Richard Sher has shown. But how many actually read Smith and how far down the social scale his writings filtered remain open questions.


In the catalogues of six libraries recently probed by Cheryl Knott, three in Massachusetts and three in Pennsylvania, WN was one of only four books held in common across all six libraries. A new major research project at the University of Liverpool, UK, will enable us to test and expand such initial research on a much larger scale. Liverpool, in collaboration with scholars at Smith’s very own University of Glasgow, Western Sydney University, the American Philosophical Society, and other institutions in the US, is conducting an extensive investigation into eighteenth-century subscription libraries in the Atlantic world, including in America, England, Ireland, Scotland, and Wales. It aims to capture, interpret and make freely available online surviving documentary evidence relating to the books acquired and circulated by more than 80 subscription libraries before 1801, through the development of a major open-access database. Thanks to these new libraries, reading became a key part of everyday life for more people than ever before. Many of these new readers belonged to commercial and artisanal groups, including butchers, brewers, and bakers. Did these newly enfranchised readers read Smith?


Initial findings indicate that Smith’s books were staple commodities in eighteenth-century library catalogues. Project member Dr. Max Skjönsberg together with principal investigator Professor Mark Towsey are currently editing the minute book of the Bristol Library Society for publication by Bristol Record Society in 2022 to mark the 250th anniversary of the library’s founding. From the committee minutes, we learn that the Bristol Library Society ordered an octavo edition of TMS in November 1773, within one year of the library’s inception. WN, meanwhile, was ordered already in April 1776, just one month after its publication. Interestingly, the Bristol Library Society categories both TMS and WN under “Philosophy.”


Bristol is an outstanding example of an eighteenth-century subscription library with its impressive run of surviving borrowing registers (running from the 1770s well into the nineteenth century). From previous studies, we learn that TMS and WN were borrowed four and fifteen times respectively between 1773 and 1784. This may not seem significant, and it is certainly a far cry from Hume’s History of England which was borrowed 180 times in the same period. However, we must keep in mind that History was an immensely popular genre at this time. Only three titles categorised as “Philosophy” were borrowed more than 50 times between 1773 and 1784, and the most popular work in this category was Lord Chesterfield’s frankly much less difficult Letters to His Son. For a better comparison, Hume’s Treatise of Human Nature was borrowed only once between 1773 and 1784 at Bristol. Above all, we must bear in mind that the Bristol Library Society only had approximately 100 members during this period, and not all of them were active borrowers. For example, Smith’s friend Edmund Burke, MP for Bristol between 1774 and 1780, was a member for life by virtue of his donations, but he did not use the library himself.


University of Liverpool’s Libraries, Reading Communities & Cultural Formation in the 18th century Atlantic will expand on previous library studies by recording the borrowings at Bristol from 1784 until the end of the century. This will enable us to trace Smith’s popularity among subscription library members, and compare it with similar libraries in Smith’s native Scotland, more provincial libraries in England, as well as New York. To stay with Bristol, the library’s 1798 catalogue also held Smith’s posthumous Essays on Philosophical Subjects.


Richard Sher, The Enlightenment and the Book: Scottish Authors and their Publishers in Eighteenth-Century Britain, Ireland and America (Chicago, 2006).
Mark Towsey, Reading History in Britain and America, c.1750-c.1840 (Cambridge, 2019).