Adam Smith’s Wealth of Nations: Maybe We Can Tweet That! 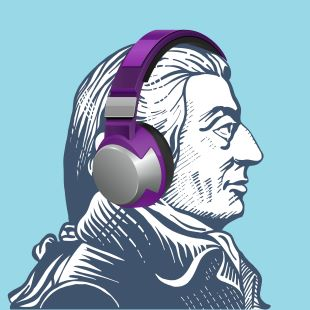 Why did AdamSmithWorks recently tweet the entire Wealth of Nations?
When George Mallory was asked why he wanted to climb Mount Everest, he famously responded, “Because it’s there.” There are worse answers we could have when people ask us why we wanted to tweet Adam Smith’s Wealth of Nations. It was there. No one else was doing it. The world was in lockdown. Why not?
And certainly, that kind of merry insouciance is exactly the tone we aimed for in our tweets. An Inquiry into the Nature and Causes of the Wealth of Nations is a serious work. We take it seriously. But that doesn’t mean we couldn’t have fun with what we took to calling the “fundamentally absurd endeavor” of commenting on it in 280 character squibs, complete with whimsical hashtags, silly .gifs, and the occasional poop emoji. But underlying all the merriment that is #WealthOfTweets are some important reasons we decided to take on the project in the first place.
Why did we leap right in and tweet the entirety of The Wealth of Nations rather than Smith’s other major work, The Theory of Moral Sentiments? After years of neglect, TMS has finally received an increasing amount of attention from scholars and readers. We think that’s great. But as TMS was picked up, The Wealth of Nations was neglected. We wanted to remedy that.
In addition, most people who haven’t read any Smith think of him in connection with The Wealth of Nations, and think of him as some kind of cartoon capitalist. Taking Smith to Twitter meant we stood a pretty good chance of introducing some people who had opinions about Smith, but hadn’t read him, to a better sense of what is actually contained in the book. Our goal was to be both accurate and entertaining, in hopes of enticing readers into the work itself—or at least onto the website for a bit of a look around.
Additionally, even people who read and like Smith often haven’t read all of Wealth of Nations. Even people who read and like Smith often will tell you you don’t have to. It’s long. Parts of it are impressively tedious. A lot of it is very complicated. Some of it is outdated. The language is difficult, and Smith spends a lot of time working out things that are just taken for granted in modern economics.
Modern readers of Smith are fairly likely to read only particular sections of Wealth of Nations, or search through the index or the html versions in order to find the particular topic they’re looking for. Or they just quote the famous passage on the natural human “propensity to truck, barter, and exchange” and then move on. By covering all of Wealth of Nations, from the division of labor to the appendix on herring, we hoped to encourage those readers to dig more deeply into Smith and to find the fascinating material that’s not in the “greatest hits” version of his work.
We could have started with one of Smith’s shorter pieces—the “History of Astronomy” is a favorite of ours. (We still think it would make for some darned fine tweeting.) We even toyed with just doing the first book of Wealth of Nations to “see how it goes.” But, like climbing Everest, there’s just something so grand, so challenging, and so enticing about the idea of doing the whole of Wealth of Nations. It was irresistible.
Interesting things happened while we tweeted. We found that Smith’s Digression on Silver—a famously tedious and detailed 65 page discussion of the history of the rise and fall of the price of silver over time—produced some of our best tweets. We originally thought we’d race through that section with a few jokes about Smith being dull. But it turns out that the Digression on Silver is fascinating. It took us a solid week to tweet it, and it was the most popular section of the project by far.
Similarly, as we approached Book 4 we found ourselves braced to deal with what we expected would be Smith’s outdated attitudes to colonial projects. After all, we had written an entirely separate tweet thread to discuss Smith’s use of terms like “barbarous and savage nations” so we could repost it every single time he used them. Surely his discussion of colonies was going to be a disaster?
We were wrong again. Allowing for certain 18th century blindspots, which we covered frankly in our tweets, Adam Smith is remarkably good on the problems of colonialism—particularly the dire practices of the East India Company.
But the best thing that happened when we decided to tweet The Wealth of Nations because, “it was there” is that so many people came along for the ride. We connected and talked about Smith with conservatives and communists, with philosophers, economists, game designers, Scottish chefs, and thousands of others.
What does that mean? For us, it means the satisfaction of a job well done. But it also means the sheer joy of sharing something we love with people around the world, of starting conversations about Adam Smith that are still going on, and of learning to translate Smith’s complicated ideas into a challengingly tight, famously touchy medium. We think we may have accidentally produced a really useful reading guide to the entire Wealth of Nations. With the occasional poop emoji.
The #WealthOfTweets concludes on March 8th, unless you’d also like to read the Appendix on Herring, which will be tweeted on March 9th. You can find the entire #WealthOfTweets project archived here.

I have appreciated the work done so far; it therefore, my request that we continue doing the same.

Adam Smith works are very interesting, practical and impactful if well utilized; i am sure that they shall be used for ever.