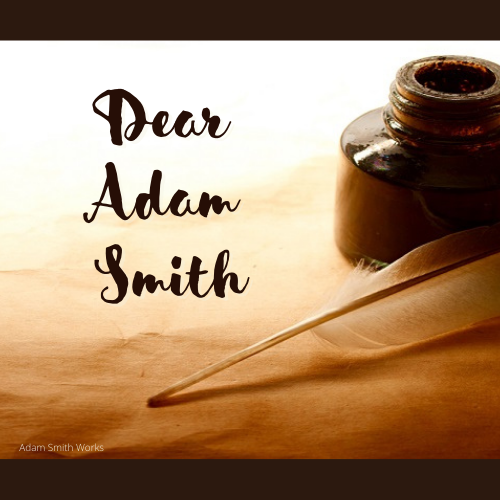 Feeling Resentful at Work? Before you quit in a fit, let Adam Smith offer some advice.
Dear Adam Smith,
I am so frustrated at work. I feel like I’m the best member of my team but a colleague with less experience was recently promoted to a position I really wanted. I talked to my boss about it, and she criticized my performance and my attitude. I’m feeling pretty resentful. I mean, seriously? Should I go over my boss’ head to complain about her? Should I look for a new job?

Signed, Passed Over
Dear Passed Over,
I’m sorry for your troubles. Relations with colleagues can be difficult. You didn’t mention your field, but if it’s anything like academia, it can give you a lot of legitimate causes for frustration when it comes to the behavior of colleagues. In any field, it can be difficult to navigate the motives, personalities, and needs of others. The key to your situation is how you handle your resentment and channel it to more temperate emotions.
When I was a young man, I was very excited to study philosophy at a prestigious college in England, but it wasn’t what I expected. England was cold, the food was terrible, I was sick and while I’ve never really said much about it, the quality of the education just wasn’t what I expected.
After three years, I came back to Scotland to regroup only to find Scotland in disarray. The Highlanders were trying to start a Civil War with England, and Edinburgh was shuttered. I couldn’t gather with colleagues, explore other options, or even consider teaching jobs. I found myself, like anyone, fighting frustration and resentment. But I found that resentment serves a purpose. It’s a signal for you to examine what it really means. Otherwise, it can lead to some behaviors and actions that you might regret later.
As I write in The Theory of Moral Sentiments:

“Resentment seems to have been given to us by nature for defence, and for defence only. It is the safeguard of justice and the security of innocence. It prompts us to beat off the mischief which is attempted to be done to us and to retaliate that which is already done; that the offender may be made to repent of his injustice, and that others, through fear of the like punishment, may be terrified from being guilty of the like offence.”

While you may feel this justifies any action you’d like to take, I encourage you to think about the idea of resentment being given to us for our defense – as a warning sign, if you like. If you use it as a signal that something needs to be examined in your own behavior, you can see if your motives are truly pure.  My question to you:  Just how resentful are you?

“The man of furious resentment, if he was to listen to the dictates of that passion, would perhaps regard the death of his enemy as but a small compensation for the wrong, he imagines, he has received; which however may be no more than a very slight provocation.”

On the scale of injustices like war or death, where do you think your resentment lies? Is your perceived injustice the sort of affront for which you’d like to see your boss punished in such a way that no one else would ever pass you over again?  Probably not. You are a civilized person and live, I assume, under a set of moral rules.
I cannot advise you on whether or not to look for a new job, but I can caution you against resentment. I find signals to be useful things when it comes to our emotion. And using the for self-examination may reveal to you just the answer you need when it comes to your job.
Yours in fellow-feeling,
Adam Smith

P.S. If you decide to seek other employment, you might want to read my response to an inquiry about making a good first impression at a first job interview.

Editor's Note: Letters to the "Dear Adam Smith" column are not, of course, answered by Adam Smith. He died in 1790. Letters are answered by Sarah Skwire, Caroline Breashears, Renee Wilmeth, Janet Bufton, and Christy Lynn. Advice is for the purposes of amusement and education about Smith's thought. We do our best, but caveat emptor and follow our advice at your own risk.