Isn’t It Odd? The Project on Smith, Hume, Liberalism and Esotericism 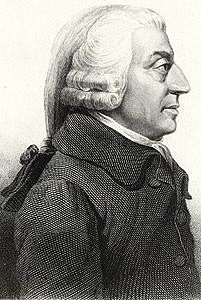 Isn’t it odd that, in recounting a story about Antimachus discoursing before an audience including Plato, Adam Smith should replace Antimachus with Parmenides, even though Smith knew that Parmenides could never have addressed Plato?


Isn’t it odd that, when Adam Smith endorses the status-quo policy of a ceiling on interest rates, saying that without such ceiling “[s]ober people...would not venture into the competition” for loans, he then immediately says that under the status-quo policy “sober people are universally preferred, as borrowers, to prodigals and projects”? If creditors can discern soberness with the ceiling, why wouldn’t they be able to discern soberness without a ceiling?

Isn’t it odd that Smith saw blooming dynamism in the Glasgow of the 1750s and yet in the Wealth of Nations tends to portray market forces as rather placid? Isn’t it odd that he remarks repeatedly on how free markets enkindle discovery of the previously unthought-of, bringing new markets and downward shifts in costs, but never highlights the dynamism of market forces?


Isn’t it odd that in the midst of propounding that “the quantity of labour commonly employed in acquiring or producing any commodity, is the only circumstance which can regulate the quantity of labour which it ought commonly to purchase, command, or exchange for,” Smith should explain that labour varies by its severity, dexterity, skill, ingenuity, and esteem, heterogeneities that not only mark the “advanced state of society” but that “must probably have taken place in its earliest and rudest period”? Isn’t it odd, then, that Smith should theorize using some homogeneous-unit-of-labor concept when he says that labor has from the very start been heterogeneous?


Isn’t it odd that Smith should say that we labor under a “deception” that wealth will make us happy, while he justifies self-approval for our having done deeds that augment our wealth?


Isn’t it odd that Smith should write of the degenerate state into which “the labouring poor” must descend “unless government takes some pains to prevent it” and seem to endorse some government financing of schooling, and yet in his final words on the subject say that the expense for schooling “might perhaps with equal propriety, and even with some advantage, be defrayed altogether by those who receive the immediate benefit of such education and instruction, or by the voluntary contribution of those who think they have occasion for either the one or the other”?


These and other oddities are treated by the papers for the project Smith, Hume, Liberalism, and Esotericism, a forthcoming special issue, edited by Thomas W. Merrill and myself, of the Journal of Economic Behavior and Organization (JEBO). Thirteen of the papers are now available here.

For assistance and cooperation in the project we are grateful to JEBO, Liberty Fund, the Institute for Humane Studies.