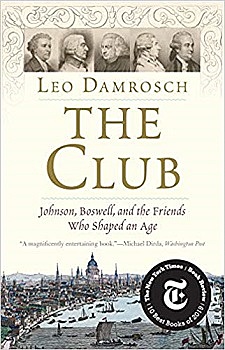 Leo Damrosch opens his New York Times Acclaimed book, The Club with a promise that “The Club is the virtual hero of this story”. A group of interested readers in a VRG (Virtual Reading Group) held by AdamSmithWorks discussed the book over three sessions in April. The wide cast of characters portrayed through many side stories piqued our interest in the numerous people, places, and texts presented. It was an excellent book to discuss. However, we were uncertain at the end if indeed the book was about The Club or simply about the men who periodically attended Friday night dinners in various combinations at the Turk’s Head Tavern in London from 1764 - 1784.
The first third of the book is devoted to the background of two unlikely friends: author, orator and intellectual, Samuel Johnson and his eventual biographer and lifetime fan, James Boswell. Johnson rises from a meager upbringing complicated by physical ailments and severe “melancholy”. Deep depressive episodes haunted him for life and were often a theme of the periodical essays that he began writing as a Grub Street hack. His epic work, Johnson’s Dictionary of the English Language earned him the title, The Great Lexicographer. Damrosch treats us to a marvelous depiction of the ordeal of producing and publishing this massive two folio work.
James Boswell was good at mimicry, drinking, having fun with friends and showing off. These activities, and his extraordinary daily journaling, kept his self-doubt in check. Boswell, while a young man in his twenties, met and latched onto the father figure of Johnson, who was in his fifties when this special 21 year friendship began. Though Damrosch credits Boswell’s meticulous diary with providing the details we know about Johnson’s life and interactions with other Club members. The stand-alone chapters on other Enlightenment figures reveal details garnered from Damrosch’s fifty year experience as an author and professor of literature. The chapters on Edmund Burke, artist Joshua Reynolds and historiographer Edward Gibbon are engrossing and will likely entice many readers to remedy their perfunctory knowledge of 18th century British history with further reading. Could that be the goal that Damrosch had in mind for his readers or students when writing The Club?
The towering personalities who belonged to The Club do overshadow The Club itself, and Damrosch’s promise to make The Club the hero of his story seems to fade in comparison to his interest in the great figures who belonged to it. The Club meetings and the required unanimous voting admittances are mentioned from time to time, particularly in regard to who was attending. We’re told that conversation was prized and encouraged. We even learn, mostly from Boswell’s point of view, about a few particular interactions that took place at these festive, often drunken dinners that lasted past midnight. That Boswell--one of Damrosch’s major subjects-- was late to join (or be accepted into the exclusive group) may explain why conversations from the club are not a prevalent focus in Damrosch’s account.


The Club is downright fun to read! The Epilogue tells us of the eventual ending of the character’s lives, including the depressing yet significant roles of some intellectual women of this time. Author Fanny Burney and socialite Hester Thrale had a complicated relationship, yet both were intimate friends with Samuel Johnson who uniquely cherished his female friendships throughout his life. One could collect a list of books and essays from each of the 21 chapters and begin a tremendous reading course about this incredible time and place.

We collected many questions for Professor Damrosch over the course of our Reading Group, and he was kind enough to join me and answer them in this AMA (Ask Me Anything) video: