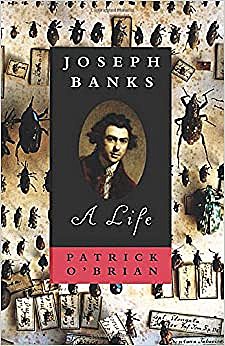 "...Banks, perhaps instinctively, knew more about economic change than his educational and scientific background let on."
While reading Leo Damrosch’s The Club in a recent AdamSmithWorks Virtual Reading Group, I realized that one of my favorite authors had written a biography of a barely-mentioned member of the Club. I immediately purchased Joseph Banks: A Life by Patrick O’Brian, author of the sprawling “Master and Commander” naval history novels.
Despite his minimal appearance in The Club, Sir Joseph Banks was a prominent personality at the intersection of Great Britain’s scientific, exploratory, economic, and international relations communities. First and foremost a botanist, Banks parlayed that scientific pursuit into a forty-one year presidency of the Royal Society, circumnavigated the planet with Captain James Cook, advocated for the colonization of Australia, and built the Royal Botanic Gardens at Kew, now a UNESCO World Heritage Site, into what they are today..
What makes this biography so delightful, however, is O’Brian’s careful eye for the strange, absurd, and curious. Banks’s grand achievements are given due treatment, but plenty of singular events are explained in great detail, to the reader’s benefit. During Banks's scientific expeditions to both Newfoundland and to the South Pacific, O’Brian gives the reader pages upon pages of Banks’s journal writings, adhering closely to his maddening style that features almost no punctuation and very little capitalization. It makes for arduous reading, but the lack of editing gives you a sense of the man almost immediately: in a hurry, can’t be bothered with formalities, and really just concerned with collecting plants.
It’s all plants, and some animals. Banks’s record of three years on the HMS Endeavour with Cook in Tahiti, New Zealand, and Australia provides us with almost no sense of his relationship with his shipmates. This O’Brien must gather from others, and from them we find that Banks was a well-loved man who trusted perhaps too much. He would stick with some damaged or damaging individuals long after most had moved on. Towards the end of his life he famously continued to endorse and fight for William Bligh even after the HMS Bounty mutiny and his disastrous Governorship of New South Wales.
Banks’ globetrotting actually ended when he was merely 28 years old, returning from the South Seas in late 1771. He was immediately feted around London, and by letter throughout the world, and was now seen as perhaps the foremost exploring scientist. He was one of a few individuals who could reliably maneuver around King George III’s growing mental issues and managed to be a lifelong friend of the monarch, hence Banks’ involvement at Kew.
A measure of his fame can also be seen from an amusing letter written to Banks from Samuel Johnson. In February 1772, the two met for the first time, and spoke of Banks’ travels and shipboard life. One of the topics must have been the ship’s goat which successfully circumnavigated the world not only with Cook and Banks but also with a previous expedition. Johnson was so taken with this animal, he wrote:

Sir,
I return thanks to you and Dr. Solander for the pleasure which I received in yesterday’s conversation. I could not recollect a motto for your Goat, but have given her one. You, Sir, may perhaps have an epick poem from some happier pen than, sir,
Your most humble servant,
Sam. Johnson

That translates to: “In fame scarce second to the nurse of Jove, This goat, who twice the world had traversed round, deserving both her master’s care and love, ease and perpetual pasture now has found.”
I will skip the less Smithian aspects of Banks’ life in order to arrive at a series of events central to his career immediately preceding and during the early years of the French Revolution. By this time, Banks was in his late 40s, well established, President of the Royal Society, and a vital node in the scientific community. And it is here where Banks’ prominence, his science, and his status as a gentleman farmer all combine.
Since 1660, the exportation of raw wool outside of the Empire had been illegal. By the 1780s, market tensions were huge, with English raw wool smuggled into Europe bringing prices three to four times higher than the domestic market. In 1782, Banks joined his local pressure group, the Lincolnshire Wool Committee and immediately penned an unsigned pamphlet calling for the end of export prohibition. It was unfortunately titled: The Propriety of Allowing a Qualified Exportation of Wool, Discussed Historically. To Which is added an Appendix, containing a Table, Which shows the Value of the woolen Goods of every kind that were entered for Exportation at the Custom-house, from 1697 to 1780 inclusive, as well as the Prices of Wool in England during all that period.
Despite the rabble-rousing nature of this document and Banks’ testimony before the Commons, the manufacturers were better organized than the farmers and exportation remained prohibited. Though we do not have any specific conversational connection between Smith and Banks outside of their mutual membership in The Club, Banks is definitely making an argument here not only that benefits himself as a wool farmer but also one he feels benefits the wealth of the nation as a whole. The Wool Act, like the more famous Corn Laws, would not be repealed until the mid-1800s.
Yet Banks, perhaps instinctively, knew more about economic change than his educational and scientific background let on. Having been stymied by the government in an effort to free the economy, Banks now turns to technology to innovate out of the problem of cheap wool. In 1785, Banks, using his numerous continental connections, managed to secure two genuine merino sheep from Spain, and this almost immediately after the end of the War of the American Revolution. Banks immediately began a series of experimental cross-breeding operations with these sheep. Then, at the request and expense of King George III, Banks began importing large numbers of merinos to grow and improve the number of fine wool producers in the United Kingdom. The project was “a most national object” according to the King. By 1792 this “national” flock numbered almost 300 sheep and began to be spread around the country for breeding. Banks had found a way to improve the quality and price of his own wool, despite government prohibitions on export. (Accomplished with a Crown subsidy, unfortunately.)
O’Brian devotes a stunning amount of time and page space to the sheep issue, mostly because it is very well documented. The Crown involvement provides an amazing amount of data. It is unfortunate that the rest of Banks’s life is represented by either his relatively sterile travel journals or volumes upon volumes of plant collecting documentation. We know from others that Banks was a well loved individual at the very heart of the scientific establishment. It’s too bad he failed to provide us with a real sense of his personal life in his writings. That limitation aside, O’Brian does an excellent job of teasing out the story of man with a tireless and lifelong enthusiasm for knowledge and scientific advancement.