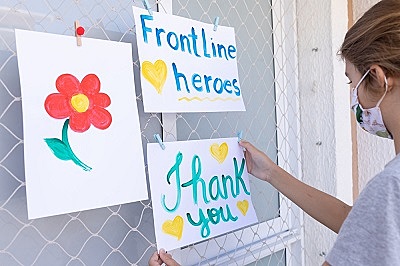 "...modernity, whatever its flaws, can’t take the blame for this shortcoming. If anything, it positions us to remedy it."
My friend Sean Speer writes in the National Post that one of the few redeeming qualities of the COVID-19 crisis is that it has amplified  the importance of work that is usually referred to, somewhat disparagingly, as “low-skilled,” such as grocery store clerks, custodial staff, and delivery drivers. Lamenting the lack of esteem this work normally commands, he says,

…there’s nothing natural about an inequality of esteem. It reflects an unhealthy tendency in modern society to value people based on their income and status. Credentials have become a stand-in for how we measure one’s worth. It’s a perversion of the promise of the meritocracy. And the COVID-19 experience has proven how wrong this thinking is.

I agree—shout it from the rooftops!—that a shift in how we think about what have become known as “front line workers” is needed. I have written about how our moral sentiments can help us navigate that shift during the pandemic. But modernity, whatever its flaws, can’t take the blame for this shortcoming. If anything, it positions us to remedy it.

We have always admired the man of rank and distinction
“Confusing impressive work with important work” is a classic mistake. Adam Smith grappled with our propensity to admire the rich and great 250 years ago in his Theory of Moral Sentiments.


This disposition has nothing to do with modern values. We like to sympathize with the rich because it’s pleasant to imagine what it must be like to be them—and they know it.

“The man of rank and distinction…is observed by all the world. Every body is eager to look at him, and to conceive, at least by sympathy, that joy and exultation with which his circumstances naturally inspire him.” (TMS, I.iii.2.1)

When we sympathise with the poor or disadvantaged it’s unpleasant to imagine the challenges they face. Even when we don’t give them our pity, we don’t naturally extend to them our esteem. We’re most likely to ignore them completely.

“The poor man, on the contrary, is ashamed of his poverty. He feels that it either places him outside the sight of mankind or, that if they take any notice of him they have, however, scarce any fellow-feeling with the misery and distress which he suffers.” (TMS.I.iii.2.1)

Smith was writing about a natural human propensity, not one that was suddenly revealed as Britain emerged into modernity. He was writing about our natural admiration of and sympathy with income and status regardless of how they were achieved. In ancient times, the rich and great were the aristocracy, royalty, and chieftains. In modern times, such income and status are more likely to be the result of the work done to help others than the result of historical accident or patronage.


Likewise, frontline work may not be paid well enough for us to naturally sympathise with workers’ wealth, but their work is indispensable. We can’t have modern medicine without clean linens and clean hospitals. And as Smith pointed out, without the increased production and industry brought about by specialization, there aren’t nearly enough resources to feed us all. (TMS IV.I.10)


We aren’t usually impressed by the courage or grit of front-line workers any more than we are by their incomes. It takes thought to understand the interconnectedness that makes their work indispensable to the world. Or it takes a global pandemic to shine light on it all.


Once we see how important front line work is,  it can earn our appreciation, and modernity can help us bridge the sympathy gap. In the past, overlooked work may have been done by those who were much, much poorer than the men of rank and distinction whom we’d have naturally admired. Victorian London relied on the night soil men, but imagine how our natural disposition would turn us away from them.


In modern times, the difference in the standard of living between white collar and frontline workers is much smaller. The increased standard of living of all workers has made it easier to sympathise with them than to pity them or turn away. This is why Smith cared about inequality and why we should celebrate the levelling effects of the modern, liberal order Smith foresaw.


So let’s applaud front-line workers—not just nurses and doctors, but the laundry staff, food packers, trash collectors, and delivery drivers. The pandemic shows us how essential they are and reminds us that they put themselves on the line for the rest of us. The modern society that depends on them has made having sympathy with them much more natural. We’ve never been better positioned to make our appreciation for front line work permanent than we are now. We need only to remember this lesson.