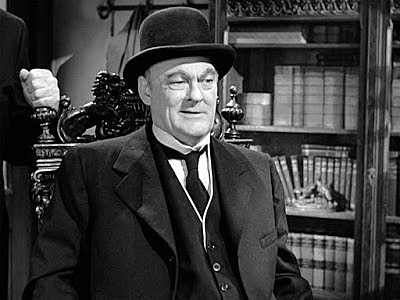 …is apt to be very wise in his own conceit; and is often so enamoured with the supposed beauty of his own ideal plan…that he cannot suffer the smallest deviation from any part of it. He goes on to establish it completely and in all its parts, without any regard either to the great interests, or to the strong prejudices which may oppose it. (TMS VI.ii.2.17)

Potter has such an “ideal” plan. It involves him having absolute discretionary power over all of the town. George gets to see Potter’s ideal plan realized in a vision made possible by George’s guardian angel, Clarence. In the vision, George never existed. The result is a world in which Bedford Falls becomes Pottersville, a seedy, impoverished city in which morally bankrupt citizens live out meaningless existences at the mercy of Potter. In the actual world, the Bailey Building and Loan makes it possible for hard-working, industrious individuals to become proud homeowners. In Pottersville, individuals are relegated to renting Potter-owned slums. While Potter’s plan is ideal (at least for him) in theory, it is far from ideal for the citizens of Bedford Falls in practice.
Mr. Potter makes various attempts to establish his ideal plan in reality. One such attempt involves Potter imagining “that he can arrange the different members of a great society with as much ease as the hand arranges the different pieces upon a chess-board” (TMS VI.ii.2.17). He does this by offering George a lucrative job as his “right-hand man” in exchange for turning over the Building and Loan to the Potter empire.
But Potter “does not consider…that, in the great chess-board of human society, every single piece has a principle of motion of its own” (TMS VI.ii.2.17). People are not pieces. The principle of motion for a person does not follow an antecedently defined rule like a chess piece does. George, though tempted by financial gain, turns down Potter’s offer. Potter presumed George would act out of self-interest and accept the offer, but individuals do not act egoistically without exception. George employs a utilitarian decision-rule, rather than an egoistic one.
In acting to promote the greater good, George provides an example of Potter failing to factor in opposition to his ideal plan—a defining characteristic of a man of system. Here lies the general problem with the man of system. Human behavior is unpredictable and diverse. Any ideal plan needs to recognize that human behavior is such and be responsive to that fact.
But human behavior may depart from what is rationally expected in different ways. Smith was worried about assuming that everyone will behave altruistically and benevolently when constructing an ideal plan because when individuals behave less than benevolently, the ideal plan will get undermined. By contrast, Potter assumes that individuals will behave self-interestedly and fails to consider potential deviations in the altruistic direction. So, when George does so, this undercuts his ideal plan. While the man of system was intended to place a check on utopianism, the underlying logic applies to Potterian misanthropy as well. The Smithian upshot is the need for a real conception of human behavior, one that is both diverse and dynamic.
Ultimately, George triumphs over Potter. Even the way in which he does so emerges organically from a voluntary, bottom-up process, not a top-down, designed plan.
Since Mr. Potter is the antagonist of the movie and so dislikable, the case for him being a man of system likely will not face much resistance. So, I will close by asking those who watch It’s A Wonderful Life as a yearly tradition to consider adding this Smithian consideration to their list of reasons to loathe Mr. Potter.