Roget.org and Other Sites to Bookmark 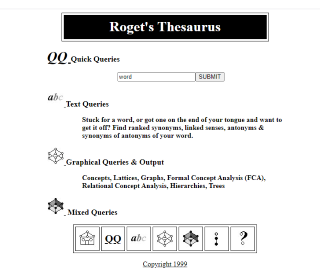 Daniel B. Klein interviews Dr. L. John Old, creator of the thesaurus website Roget.org.
The website Roget.org was created by Dr. L. John Old from the content of the 1911 edition of Roget’s Thesaurus. As my appreciation for the site grew, I reached out to Dr. Old by email. I asked some questions about the site, and his replies appear below.
When writing, I make frequent use of a thesaurus. Years ago I bookmarked Thesaurus.com, and fell into the habit of turning there. It’s a great resource. But I have lately discovered Roget.org and now I turn there more often. Roget’s has a conceptual basis. Also, it includes more idiomatic expressions.
But the material at the Roget site is from the 1911 Roget’s Thesaurus, so there is an old-fashionedness to the treasures that Dr. Old has put at our fingertips.
In the interview that follows, we also discuss the wonderful and highly recommended site Online Etymology Dictionary.
Dr. Old grew up in Taranaki, New Zealand. He earned his degrees in computer science with minors in psychology, cognitive science and artificial intelligence. His doctoral dissertation, from Indiana University, Bloomington, was on The Semantic Structure of Roget's. He is retired from teaching computer science at Edinburgh Napier University, Scotland, and currently lives with his German wife in Brunswick, Germany.
What advantages does your online Roget’s webpage have over Thesaurus.com?
Dr. Old:  Thesaurus.com functions in a more point-to-point way: You have a word but you feel it isn’t quite right, and you turn to that site for a list of specific alternatives. By contrast, Roget.org was designed to explore and research words and meanings in a connected way.
Roget’s Thesaurus, first published 1852, was developed from Peter Mark Roget’s own scheme of conceptual categories. The Synopsis of Categories is an ontology, or hierarchy of concepts, organized to reflect Roget’s perception of the arrangement of the universe. Under the lowest level of the hierarchy are 1,000 categories. It is in these categories that Roget classified his collected lists of words of similar meaning--the synonyms.
The user of the book, however, goes first to another part of the book, the index, to discover all of the spots in the categorized lists where the word is included. The website begins with inputting your word, as though looking it up in the index. You then see conceptual categories, and go from there.
As a research site, Roget.org has no marketing or advertisements, and doesn’t require any cookies to be set. On the other hand it was designed by one guy as a hobby – Thesaurus.com is a company, and their pages are more professional assumedly.

Use licensed through CartoonStock.com
Do you think it matters much that the material is from 1911?
Dr. Old:  Generally, no, because most English words are the same today as in 1911. Words may also have acquired additional meanings. The most common words we use, however, haven’t changed their basic meaning in the last hundred and ten years.
There are words in Roget’s that are identified as obsolete and archaic. These have mostly been eliminated from thesaurus.com, which is a pity in some respects. I sometimes feel that today’s vocabulary is less rich and less nuanced than that of 1911.
Why did you create the online Roget’s webpage?
Dr. Old:  The website was created as a resource for research on Roget’s thesaurus and the semantics of the English language. A text file from the Project Gutenberg: Free eBooks web site, was converted to a database. The database, html files, and Roget’s web site were aimed at making a free, digital, open source version of the 1911 Roget’s Thesaurus available to any researcher who was interested. It was inspired by the research work of Professors Walter A. Sedelow Jr. and Sally Yeates Sedelow on whole-language semantic space.
Who was Roget?
Dr. Old:  Born in 1779 in London, Peter Mark Roget was a Victorian English medical doctor. His father came from Geneva and his mother was the sister of Samuel Romilly, an associate of Adam Smith’s.
Roget was a genius, credited with inventing the log-log slide rule, the main method of calculation for engineers before the invention of computers. He also developed a pocket chessboard that could be carried while travelling.
His paper “Explanation of an Optical Deception in the Appearance of the Spokes of a Wheel Seen Through Vertical Apertures,” (1824) is regarded as having been vital to the development of cinema and animation (i.e., he helped invent movies).
Roget helped establish the Manchester Medical School and the Northern Dispensary, where he treated patients free for eighteen years. He was Fullerian Professor of Physiology at the London Institute and Examiner of Physiology in the University of London, a Fellow of the Royal College of Physicians and Fellow of the Royal Society (and secretary of the organization until he retired from the position in 1848), a Fellow of the Geological Society, a Member of the Senate of the University of London, and a Founder member of the Society for the Diffusion of Knowledge.
He published several treatises, on physiology, electricity, galvanism, magnetism and electromagnetism. He knew English, French, German, and Latin.
When he retired he turned his lifelong hobby of collecting lists of words into a thesaurus, and at age 73, in 1852, had it published as Roget’s Thesaurus. He died in 1869 at the age of 90.
Was there such a thing as a thesaurus before Roget’s Thesaurus?
Dr. Old:  There were synonym dictionaries before Roget’s. They gave alternative words (vocabulary options) to people wishing to widen the scope of their speech, and possibly to enhance their standing in a class society. Roget’s goal was to classify words according to their meaning and to make it easier to discover words of similar meaning.
Why did Roget make a thesaurus?
Dr. Old:  One of Roget’s biographers, Joshua Kendall, suggests that the doctor was obsessive compulsive, and that his collecting of lists of words was habitual. It is clear that he was driven, but the Synopsis of Categories at the beginning of the Thesaurus shows that, like Linnaeus with his classification of plants and animals, Roget thought that words were of similar interest.
Was that usage of the word “thesaurus” original with Roget?
Dr. Old:  Not quite. According to etymologist Douglas Harper, about the word thesaurus:

The meaning “encyclopedia filled with information” is from 1840, but existed earlier as thesaurarie (1590s), used as a title by early dictionary compilers, on the notion of thesaurus verborum “a treasury of words.” Meaning “collection of words arranged according to sense” is first attested 1852 in Roget’s title.

Harper is the creator of the Online Etymological Dictionary. What do you think of that site?
Dr. Old:  The Online Etymology Dictionary is easily the best source for the etymology of English words, for English readers. In recent years it has included Indo-European roots as well, so the enquirer can now research and connect to cognates (words of that share the same etymological origins as the search word).
Often, etymology is more than a little conjectural. But I consistently find Harper’s conjectures to be sensible.
Are there other language webpages that you think people should bookmark?
Dr. Old:  A Google search usually finds what I’m looking for. For a dictionary bookmark, I would suggest this page.
Wiktionary is well maintained by experts, and does not have ads or tracking cookies.
A resource for language research is WordNet. Developed as a “model of the mental lexicon” by the father of cognitive psychology, George A. Miller, it was originally based on the 1911 edition of Roget’s Thesaurus.
Thank you, Dr. Old, for responding to these question, and especially for creating Roget.org.

Art Carden, How to Read a Book Inspectionally
Lauren Hall, Adam Smith on the Emergent Meaning of "Stuff"