with your scholar-host, Graham McAleer* 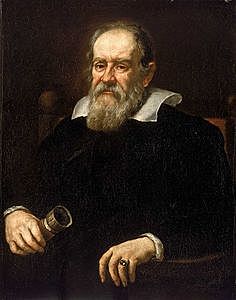 In this piece we consider the possible impact of major events in the sciences upon Adam Smith’s thought.
Born in 1723, here are some scientific milestones that shaped Smith’s world:
Galileo’s 1632 Dialogue Concerning the Two Chief World Systems destroyed a belief held for millennia that the heavenly bodies were perfect.  The telescope revealed all manner of pockmarks and distortions amongst the stars.  Pascal, who died in 1662, expressed profound anxiety about the telescope: for him, it showed a horrible disproportion between the vastness of the blemished heavens and the brittle smallness of being human.  “The eternal silence of these infinite space frightens me.”  Disfigured and adrift were his overwhelming philosophical intuitions.
Yet, at the same time, the nascent science of anthropology was solidifying the idea of place, albeit in lurid and alienating hues.  Travelogues and ethnographies – Smith and Adam Ferguson both read one by the Jesuit priest, Joseph Lafitau – offered accounts of lands and peoples wildly different to those of Europe.  The New World brought reports of riches, strange lands, and fresh possibilities of settlement, but also descriptions of human sacrifice and cannibalism.  Jurists of the period scrambled to find a framework that could make the differences documented by early anthropology manageable.  The depth of anxiety can be measured by the intense reflection on the law of war in this period.
Adam Smith made many original contributions to ethics, but one of his most potent is that of the spectator.  In a follow-up post, I shall contend that the spectator is an idea originating from, and trying to cope with, the estrangement and fragility suggested by astronomy and anthropology.
Meanwhile, this post concentrates on a quite opposite direction suggested by the sciences.  In 1665 Robert Hooke published Micrographia, an astonishing work of observation, descriptive writing, and illustration.  His microscope revealed a hitherto unexplored world of tiny insects and patterns in natural phenomena like cells and snowflakes.  The overwhelming experience provoked by his descriptions and illustrations was of symmetry, precision, repetition, and order.  In 1687 Newton’s Principia Mathematica reinforced these intuitions in posing science as proofs of general applicability.  Smith was smitten:
“…in the manner of Sir Isaac Newton we may lay down certain principles known or proved in the beginning, from whence we account for the several phenomena, connecting all together by the same chain.  This latter which we may call the Newtonian method is undoubtedly the most philosophical, and in every science whether of morals or natural philosophy etc., is vastly more ingenious and for that reason more engaging than the other.  It gives us a pleasure to see the phenomena which we reckoned the most unaccountable all deduced from some principle (commonly a wellknown one) and all united in one chain” (LRBL, p. 145-46).
Hooke’s Micrographia strongly suggested that the chain was coherence and balance, in a word, aesthetics. 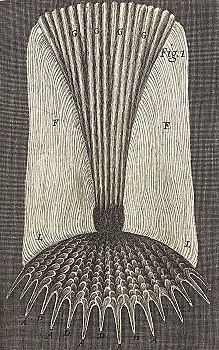 Smith set himself the task of reconciling two seemingly divergent pathways documented by the sciences – distortion and symmetry.  He wanted to give both their due, but ultimately gave priority to natural harmony.  He appears to have thought that, on balance, the sciences bore this out.  Indeed, this priority is a guiding thread of the Scottish Enlightenment.
This conviction has ancient philosophical lineage, but it had notable defenders proximate to Smith.  Smith read both Leibniz and Shaftesbury.  At the start of Leibniz’s Discourse on Metaphysics, we read:
“I am far removed from the opinion of those who maintain that there are no principles of goodness or perfection in the nature of things… In saying, therefore, that things are not good according to any standard of goodness, but simply by the will of God… I find so strange those expressions of certain philosophers who say that the eternal truths of metaphysics and Geometry, and consequently the principles of goodness, of justice, and of perfection, are effects only of the will of God.”
In his highly influential 1711 Characteristics of Men, Manners, Opinions, Times, Lord Shaftesbury likewise dwelt on geometry:

“The kind of harmony to the eye from the various shapes and colours agreeably mixed and ranged in lines, intercrossing without confusion and fortunately coincident.  A parterre, cypresses, groves, wildernesses… Solemn representations of things deeply natural.  Caves, grottoes, rocks.  Urns and obelisks in retired places and disposed at proper distances and points of sight, with all those symmetries which silently express a reigning order, peace, harmony and beauty!”

In his 1779 Essays on the Principles of Morality and Natural Religion, Smith’s patron, Lord Kames, is sure a “masterly and kindly hand is visible in the architecture of man,” and the chief evidence is sympathy.  God “has given us this noble principle entire, without a counterbalance, so as to have a vigorous and universal operation.”  This sympathy begets the arts: “A lion has claws, because nature made him an animal of prey.  A man has fingers, because he is a social animal made to procure food by art not by force.”
Hume’s account of human nature and the ornamental life in “Of Commerce” speaks of “the harmony of the whole” being supported by “a spirit of avarice and industry, art and luxury.”  What humans chiefly seek is novelty, opulence, and “a desire of a more splendid way of life.”
The Theory of Moral Sentiments is saturated with these themes.  An aristocrat’s greatest triumph is, as Smith puts it brilliantly, “to figure at a ball” (p. 55).  A luxury watch is valued as an accurate timepiece but its utility is not what ultimately recommends it: rather is “the perfection of the machine” (p. 180).  Evidently conflictual, resentment is the most asymmetrical sentiment, and thus:
“There is no passion, of which the human mind is capable, concerning whose justness we ought to be so doubtful, concerning whose indulgence we ought so carefully to consult our natural sense of propriety, or so diligently to consider what will be the sentiments of the cool and impartial spectator” (p. 38).
Last, but not least, is the idea of balance in his description of the estate belonging to the “proud and unfeeling landlord,” who figures in the seminal invisible hand passage:

“The rest he is obliged to distribute among those, who prepare, in the nicest manner, that little which he himself makes use of, among those who fit up the palace in which this little is to be consumed, among those who provide and keep in order all the different baubles and trinkets, which are employed in the economy of greatness…” (p. 184).

Moral life is attuned to the order, ornament, splendor, and regularity which run from the cell and the mite to the great estates and institutions of nations.

Possible Questions for Discussion
1.      Can you think of other seventeenth century scientific works that point towards balance or asymmetry?  Do you know if Smith read them or was likely familiar with their ideas?
2.      Do you think there is a tight connection between an aristocratic or celebrity figuring well at a ball and the symmetries observed in insects?  If so, do you think the connection especially significant?
3.      Is the economy of greatness sustained by objects exhibiting balance, harmony, and symmetry?

Very interesting post. I do think the economy of greatness is sustained (or, at the very least, enhanced) by objects exhibiting balance, harmony, and symmetry. These things convey a sort of aesthetic of beauty, an inherent attractiveness. They attract the eye and inflame our spirits.

That said, this beauty can also work against the economy of greatness. I am thinking of Smith's Man of the System who becomes so enraptured of the beauty of his plan (that is the balance, harmony, and symmetry that seems to permeate it) that he ends up acting as though all men are just pieces on a chessboard. This can, and frequently do, mess up the economy of greatness and, if taken to extreme lengths, I think can lead to great and costly uprisings and injustices.

In his "History of Astronomy," Smith argues that wonder is a sentiment reacting to novelty. It has two components: the easy flow of the mind from one idea to the next is broken and becomes disjointed as we struggle to find a place for the novel in our classifications, and this cognitive disruption is attended by a "movement of the spirits." The mind seeks a "bridge" to bring order and coherence to its impressions, otherwise wonder provokes "lunacy and frenzy" (EPS, 34-43).

In TMS, Part VI, the "man of system" is contrasted with those who accept establishment, "the great orders" (love of system). Succumbing to the "spirit of system," the striken "man of system" is "intoxicated" and bedazzled, "refusing all palliatives," a dupe of "the imaginary beauty" of his novel "ideal system."

Part VI begins with a long discussion of prudence, then a championing of "delicacy of attention." This balanced approach to life, and its refinement into delicacy, is then contrasted with the frenzy and violence of the "man of system." An interesting tie-in with economics closes the section, the "spirit of system" giving us "political speculators:" thus, not order and coherence, but riled spirits giving us speculation and the vertigo of politics and markets out of symmetry.

Do you think there is a tie-in with the "History of Astronomy" essay?