Tenniel and Smith know the Mad Hatter's topper is more than a silly silk hat. 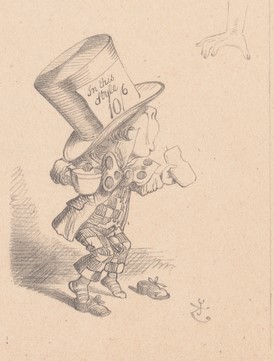 So impoverished might he be that he could not afford to forgo the small profit that he could make by using his hat to contribute in some way to his business. Hence, the price-tag prominently displayed in the Hatter’s hat.
To think of Lewis Carroll’s Alice’s Adventures in Wonderland is to think of the illustrations of Sir John Tenniel. The dapper White Rabbit with his checked jacket, waistcoat, pocket watch, and perpetual air of anxiety, the striped Cheshire Cat with his sinister and vampiric smile surmounted by his large and psychotically staring eyes, and the rotund twins Tweedledee and Tweedledum with their striped cricket caps and high-waisted trousers. And, of course, there is Alice herself, demure but assertive in her dress, pinafore, plain stockings, and her headband securing her rather pre-Raphaelite hair.

But Tenniel’s illustrations of Alice’s Adventures go beyond whimsy: They are packed with sly details. Some of these are obvious. His use of bewigged parrots to depict the lawyers in the trial of the Knave of Hearts is clearly a comment on the perceived intellectual ability of that profession. But some are subtle. While his illustration of the King and the Knave of Hearts conforms to the standard design of the playing cards from which they originated he depicts the Queen of Hearts as dressed in the clothing that was typically worn by the Queen of Spades. This card was traditionally associated with malice and misfortune. Deliberately bucking tradition Tenniel depicts the Queen of Hearts in garb that is fitting for a monarch who was “dreadfully fond of beheading people” [Alice’s Adventures in Wonderland, Chap. 8]
Other illustrations echo economic and moral insights of Adam Smith.
Consider Tenniel’s illustration of the Mad Hatter. With his craggy face, starched high collar, absurd bow tie, and oversized head, the Hatter may appear a simple figure of fun—until one considers his price tag (“In this style, 10/6”) tucked into the band of his top hat. Is the Hatter using his own hat as advertising? Is the hat itself for sale? Why would the Hatter feel the need either to use his hat as advertising or to offer it for sale? After all, as a hatter, wouldn’t he be well-placed to enjoy one of his own hand-made hats, free from the need to use it for business purposes? The answer (as Tenniel consciously or unconsciously realized) was “no”—and it was “no” because the Hatter’s approach to his craft deprived him of many of the advantages of the division of labor.


The Hatter’s top hat was likely made of silk, for by 1865 (the year Alice’s Adventures was published) silk toppers had largely replaced those made of beaver fur. Since it was priced at just 10/6 (about $65 in modern US dollars), it would have been a very inexpensive hat. (Period advertisements from the hat-making Henry Heath of Oxford Street, London state that their cheapest silk toppers—tactfully described as being of “Other Quality”—were 10/6.) In the middle of the 19th century the production of silk hats was extremely labor intensive. Made from linen, shellac, and silk plush, the hats were constructed by first baking the shellac into the linen; this was then shaped by hand around a wooden hat-block. The brim and crown of the hat were then shaped and the silk plush added. The hat was then lined, and then the interior sweatband and exterior hat bands were added. In the middle of the 19th century in small operations—such as the Hatter’s—all of these tasks were performed by a single hatter. The Hatter’s labor was thus unified into the production of one hat at a time. By contrast, in larger operations this labor was commonly divided between body makers, silk finishers, and toppers off. This division of labor (as Smith observed in the Wealth of Nations I, Chap 1) both facilitated their increasing their dexterity in their individual tasks (and so performing them better and faster) and enabled them to save time by freeing them from having to move from one task to the next. Their productivity was consequently higher than the lone Hatter. Since the cooperating laborers could produce more hats per hatter per hour than the Hatter, they could make the same aggregate profit as him even if they charged less for their hats than he did.


Unfortunately for the Hatter, since the quality of their hats would (ex hypothesi) be just as good as his he would have to lower his prices to compete with them. Indeed, given the price that he ascribed to the Hatter’s hat Tenniel slyly indicates to his audience that his wares were of fairly low quality. Since his profit margins would be as low as his more productive competitors, but the number of hats he would be able to make and sell would be fewer, the Hatter would be financially worse off. Indeed, so impoverished might he be that he could not afford to forgo the small profit that he could make by using his hat to contribute in some way to his business. Hence, the price-tag prominently displayed in the Hatter’s hat.


Yet Smith’s views on the division of labor are not merely economic—they are moral. For Smith, the division of labor was not so much the effect of differences between persons as a cause of it—he famously observed that the difference in talents between a philosopher and a street porter was a result of their being "employed in very different occupations” rather than of any inherent differences between them [Wealth of Nations I, Chap. 2]. Smith is thus very much an egalitarian in the sense that all persons are roughly equal in talents, and all share the same human nature. There are thus no distinctions to be drawn in terms of class, nationality, or race between person’s abilities to make decisions for themselves when exercising their “propensity to truck, barter, and exchange”.


Unfortunately, Tenniel’s illustrations do not depict this egalitarian aspect of Smith’s view of the division of labor. In addition to his fame for illustrating Alice’s Adventures Tenniel was also well-known as a cartoonist for the satirical magazine Punch. In that capacity he drew several cartoons (e.g., “The Irish ‘Tempest’” of 1870, “Two Forces” of 1881, “The Irish Devil-Fish” of 1881, “The Irish Frankenstein” of 1882) that depicted the Irish as violent, with ape-like facial features including protruding jaws, staring eyes, and extensive facial hair. Aimed at opposing Irish self-rule and supporting their governance by the English, the message conveyed by Tenniel’s depiction of the Irish was clear—they were simply unfit to govern themselves. A far cry from Smith’s egalitarianism—and a clear indication of the dangers of ignoring the moral implications of Smith’s economic views.