The Future of Farmers – Adam Smith Weighs In 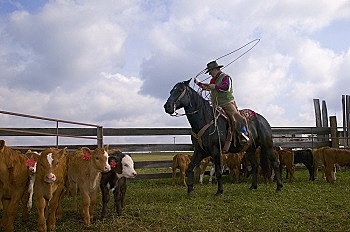 The ailment, clearly, is not affecting farming, but farmers, historically understood. Our issue is a social one, not a technical one.
I’m halfway up Laughlin’s California Tower--room 11,107. I confess I’ve not seen room numbers that high before. Below me stretches a casino hellscape: a layer-cake parking garage, a mega-scale lightbulb-encrusted fake steamboat, the channelized Colorado river flowing grey-brown through a Martian landscape of raw toothy ridges. I’m here, improbably enough, to give a talk about the future of farming to the Southwest Indian Agriculture Association. Yet outside is nary a growing thing, save for decorative palms, and the only viable crop appears to be retirees’ nickels and pennies. Adam Smith would be fascinated, no doubt.
What would he make of modern farming? He wrote in the Wealth of Nations that “No equal capital puts into motion a greater quantity of productive labor than that of the farmer.” He goes on to say (publishing in 1776, auspiciously enough) that “it has been the principal cause of the rapid progress of our American colonies toward wealth and greatness that almost their whole capitals have hitherto been employed in agriculture.”
Today, if we credit the prevailing zeitgeist, family farming is going extinct in America. The New York Times tells us the wrenching tale of the Hull’s seventh-generation farm going under: “We don’t want to leave the land, but we’re running out of options.” Some eight hundred dairies in Wisconsin winked out of existence last year; Jim Briggs speaks for the rest of those still hanging on: “We’re day-to-day right now.” The average age of farmers and ranchers is fifty-six and going up. As I write this, I can relate—I put my cattle operation up for sale last week.
So I’m here to talk about the future of farming. What on God’s green earth can I say?
There is turmoil, land speculation, alternative products (fake meat, forsooth!), a declining “old breed,” and kids who don’t want to come back to the home place. In short, the kind of creative destruction that has defined agriculture for at least two centuries. But the one thing that is unambiguously not happening is the Malthusian-fevered nightmare of food shortages. We are producing more food, with less labor, than ever before in history. With current techniques we can theoretically feed nine billion souls using just the surface area of Australia, relinquishing the rest of the planet to wildlife habitat, natural parkland, or anything else we deem “natural,” “higher,” or “better.”
Yet some part of my soul weeps at this.
The ailment, clearly, is not affecting farming, but farmers, historically understood. Our issue is a social one, not a technical one. Our Mennonite partner just sold his family farmstead under pressure from the big new dairy that is “mining” water (his word) from the local aquifer. A neighboring ranch has bored deep wells that literally whistle, sucking air into a water table that is dropping six feet a year. How can we assess these anecdotes, seeking a rational response to them?
On the one hand, these fancy new southern-state mega-dairies are no doubt filling the production void left by retreating Wisconsin family dairies—milk is cheap and plentiful. On the other hand, an entire way of life is being replaced by tech-savvy, deep-pocketed agribusiness conglomerates that seem to lack a certain soul, a terroir that links production and community. But maybe I’m just hopelessly romantic.
Adam Smith popularized the metaphor of the pin-maker. Division and specialization were the phenomena that begat wealth. Agriculture is certainly more divided and specialized than ever before. Howard Buffet, (“Warren’s Son,” in case you didn’t know…) is running monster tractors across the flats where I grew up –the kind of tractor President Trump says we’ll all need to buy more of after the next round of trade-talks. Is this the future? Mechanical wizardry and technical precision in place of family lore and Grandpa’s mule? It really is hard to see any reasonable alternative, short of some patronizing external intervention designed to “save” the family farmer—coddled and trussed like the last pygmy rhinos of Sumatra.
Why does “farmer” evoke such an emotional response within us? Is it the myth of a coherent way of life? Perhaps a “farm” evokes wholesome tranquility and bucolic splendor in a world defined by urban grit and traffic. It’s a sham, mostly, of course. Farmers and ranchers spend as much time on the road as anyone else—probably more. Are we all just going to have to anguish over a lost way of life? Are we bemoaning ruralness itself? Is it really so very bad? How many other medieval fixtures do we lament? Public beheadings? The joust? Open-trench sanitation?
Smith implies that farming is a nearly miraculous source of national wealth. And if wealth, at bottom, is the recombination of atoms toward useful human ends, then the modern conventional farm, replete with Nitrogen sprayers, tanks of anhydrous ammonia, and half-million dollar machinery is inordinately wealthy. Good Midwestern bottom-land is going from $5,000-$8,000 an acre—money is to be made in the business if you’re really big, really fancy, really productive.


Yet Smith, in his inimitable observational brilliance, goes on to say “We see every day the most splendid fortunes that have been acquired in the course of a single life by trade and manufactures, frequently from a very small capital, sometimes from no capital. A single instance of such a fortune acquired by agriculture in the same time, and from such a capital, has not, perhaps, occurred in Europe during the course of the present century…” Too true, and it’s not just in Europe.
I know a guy who started out in dry-cleaning chemicals in California, then sold out at a substantial profit and proudly declares he’s “now a rancher in Arizona.” As they coyly say, the best way to make a small fortune in the cattle industry is to start with a large one. He’s in agriculture for the “lifestyle” and all power to him. I would be too, if I could afford it.


Genesis tells us that “in the sweat of thy face shalt thou eat bread.” Dust unto dust and all that. But it’s either not true or far more complicated than we mere mortals can ken—how many of your acquaintances have sweated to eat this past week? Is it possible, in fact, that our social anxiety about the loss of farming is in fact emblematic of a greater, even sublime, victory? Release from an age-old curse? Perhaps the fruit of the tree of knowledge set us free. God knows.


So here I am, addressing the Southwest Indian Agriculture Association, trying to offer tips on how to make a living in farming to a poverty-plagued people who have been scratching a living from the earth millennia before my ancestors came to this continent. They understand “sweat of thy face” more than most modern Americans, pursuing it, as I have done, under the frankly Marxist mode where production is regulated by our immediate society. We rear cattle (like Marx wanted to, “in the evening”), because our fathers and grandfathers did. But Marx, Smith’s bête noire, was wrong. It’s a dead end. Ask the Hulls. Or a Wisconsin dairyman. Or me.
Anyone care to buy a ranch? Cheap…