Adam Smith on Money as a Medium of Exchange

system of natural liberty propensity to truck, barter, and exchange history of money medium of exchange functions of money capitalism 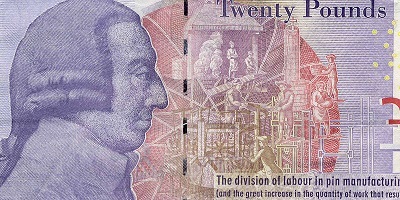 It was Adam Smith, who first introduced the notions of nominal and real values of money. First being the absolute value of a certain amount of money, and second being the quantity of goods and services that can be purchased with it.
According to Adam Smith, the roots of commercial society can be traced to that moment when division of labor enabled producers to expand their production beyond their own needs. By creating this surplus, they were in position to exchange it with that of other producers. Therefore, every member of society became a trader at the same time. For trade to happen one man must possess something that the other man needs and vice versa. If this wasn’t the situation, trades could not be made. This was the state of societies in early parts of human history, where division of labor has taken place in early stages. Therefore, before the introduction of money or other means of exchange before the money was confirmed and adopted, one producer could exchange the surplus of his production with the one of the other, only if he had a need for the precise item that existed in surplus.


In this early stage of development of “economic” society cattle was often used as a means of exchange. Adam Smith writes in Wealth of Nations that evidence of this practice can be found in Homer’s Iliad, where it is noted that “the armour of Diomede costs only nine oxen, while that of Glaucus cost a hundred oxen.” At the time of writing Wealth of Nations, Adam Smith doesn’t hesitate to show that the practice of using other means of exchange was still present in some parts of the world, like India where they used rare shell species or Virginia where they used tobacco. Once introduced, however, metallic money forever changed the way the exchange of surplus of production was performed. It was preferred over other means of exchange, as money wasn’t easily damaged, it was easily divided into smaller parts and reunited again. For instance, a man who wanted to buy a certain quantity of salt, which equaled half an ox, cannot perform this exchange and use the ox again for some other more valuable trade without significant loss due to this division. This wasn’t the case with money, as Adam Smith writes, as money can be divided into smaller parts without any loss and recombined again into larger amounts.


Throughout history, different forms of metallic money were used, sometimes copper, sometimes iron and sometimes gold and silver. What was in common for all these metallic items, despite difficulties of using them in early stages of development of commercial societies, were all these characteristics that money as a means of exchange still has today. First of all, it is durable and not easily damaged, secondly, the scarcity of the various metals from which the coins are made make it less likely that it will lose value and thirdly, it can be easily divided into smaller parts and reunited again without any loss.


Once introduced, metallic money and all its variations including paper money, enabled easier calculation of the real value of goods and services provided. It also led to the acknowledgement of the true power of the free market over any of its variations including government interventions. Money, therefore, became not just a symbol of purchasing power of buyers, but the measure of value of produced goods and services. Therefore, money has this “value in use” and “value in exchange.” With a certain quantity of money, it is possible to purchase a certain amount of other goods. Therefore, this purchasing power can be related to the “value in exchange”. Secondly, “value in use” refers to the utility of a certain commodity.


It was Adam Smith who first introduced the notions of nominal and real values of money: the absolute value of a certain amount of money, and the quantity of goods and services that can be purchased with it. However, he states that the real value of any commodity is the amount of labor invested in its production, shown through its money price. Therefore, he shows that other commodities like money, have that “intrinsic value,” consisting of quantity of labor, stock and land, necessary for its production, but also “use value,” in terms of utility these commodities have to the end user. However, it is this labor, stock and the land’s (through rent) employment of other people, that in reality the buyer purchases. This can be equally said for Smith’s own work, which functions in the same way. The introduction of money led Adam Smith to reconsider mercantilist notions of the day that the real wealth of any country is the amount of gold and silver it has. Instead, he suggested that it is the value of goods and services produced and consumed in a year, that is the real value of a country’s wealth. This helps him to introduce his idea of “system of natural liberty” or “capitalism”, which from there on led the world to the path of development never seen before in human history.