What Adam Smith Ate: The Picnic 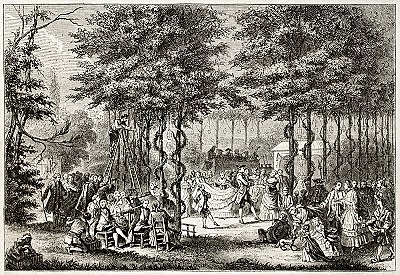 October 19, 2020
The year is 1764. Adam Smith has accepted a position as tutor to the young Duke of Buccleuch, an 18-year-old named Henry Scott. The plan is for Smith to accompany Mr. Scott on a tour of the continent and with the right introductions, Smith knows they will be able to meet some of the best scholars, philosophers, and personalities of the day.


The position had come to Smith via a recommendation from David Hume to the Duke’s step-father, Charles Townshend. (Townshend would later become known to Americans as the architect of taxes on imported goods like paper, glass, and, you guessed it, tea.)


Introductions, also called recommendations, were the social currency of the day. A personal recommendation from one friend to another was the same as vouching for someone’s character. And if you received a letter of introduction, you should, at the very least, invite the recommended person to dinner.


The problem with introductions was that you were reliant on someone else to make them and, as Smith notes in July of 1764, they had relied on Townshend for introductions in France. But, after some weeks in Toulouse, they had heard nothing. Without introductions, there were no invitations which made their trip very dull. (Smith notes he was so bored he started writing a book which would later become known as An Inquiry into the Nature and Causes of the Wealth of Nations.)


Smith also notes that his young charge hasn’t acclimated very well to France. It was likely the young Duke was still learning the language and Smith notes that they really had no friends in Toulouse with whom they could “cultivate acquaintance.”


By October, though, Smith writes of a changed situation. Their letters of recommendation had arrived and introductions were made. They visited Bordeaux with introductions to the well-connected Duc de Richelieu and others. And more importantly, Smith notes their expedition “has made a great change upon the Duke” who was beginning to embrace French culture and company.


What evoked the change in attitude for the young Scottish Duke? We can guess that in Bordeaux, a sophisticated French port city known for its international wine trade, he and Smith enjoyed a livelier social scene, courtesy of their connections. (The Duc de Richelieu was known to be a bit of a libertine.) It’s likely there were dinners, parties, young ladies, and, of course, the fine wines of Bordeaux!


There would have been ample opportunities in August or September for outdoor social outings from horseback rides to river trips up the Gironde. At the heart of these outings was the French picnic. Thought to derive from piquer and nique (to pick or peck something of small consequence) these outings were also called fêtes-champêtres (pastoral feasts.) The party would include ladies with parasols, gentlemen in their powdered wigs, and servants who unloaded tables and chairs from carriages. Or the group might model Queen Marie Antoinette’s style by reclining on blankets and sitting on the ground. Some historians even say these gatherings offered great opportunities for adult dalliances! (Quel scandale!)


A picnic might include music or games, but always food and drink. Wines and iced punches would accompany a feast of foods designed to travel well and withstand heat. There would have been pastries, strawberries, jams, pates made with foie gras and game, vegetable terrines, rillettes, duck confit, cold or cured meats, smoked oysters, cheesecakes, oranges, and confections like candied fruit or nuts.


Today, we’re more likely to pop down to our local grocery story or delicatessen for a few pre-made treats, many of which still hold their origins in the same French traditions. We can imagine the quiet but merry Adam Smith sitting with ladies and gentlemen of the day and a young Mr. Scott laughing as they sipped wine and enjoyed a lunch of pates and pastries in 1764 Bordeaux.


Here’s a picnic treat you can make at home that very likely hasn’t changed much in two hundred and fifty years. It will be perfect for your own picnic, whether you’re in France or not.

1.        Melt the butter in a medium sauce pan over medium heat. Add the onion and saute until soft.
2.       Add the trout, wine, and lemon zest.  Cook until all ingredients are well mixed and most of the wine has evaporated, 5-8 minutes. Taste and add salt, pepper, and lemon juice as needed.
3.       Remove from heat and let cool to room temperature. (The butter will make the mixture soft but solid.)
4.       Transfer the mixture to a bowl. Add chives and mix well until ingredients form a smooth mixture, like a thick spread.  Adjust seasonings if needed.  Place in bale jars or a crock for your picnic. Serve on fresh crusty bread.